Not far from Miebashi Station on Yui Rail is a hill we'll call Nanachi-baka.
Best translated as Seven Tombs for the family burial sites which stood there.
Surrounded by the concrete of Naha, it's on private property but the woods are visible. 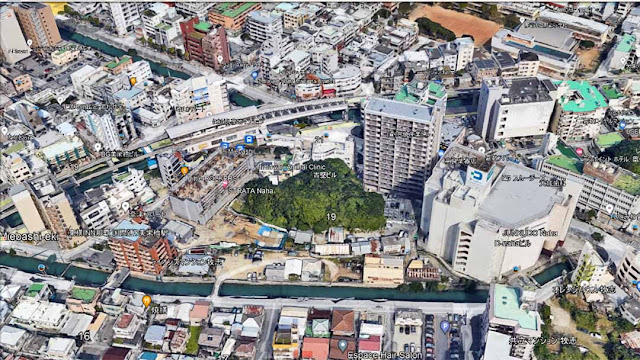 Thanks to Google Earth Pro you can see the terrain. There's a bit of greenery in the image.
Whenever you spot a grove of trees on a hill in the city, assume it's some sort of sacred place.
If it weren't special, developer bulldozers would have claimed the land. 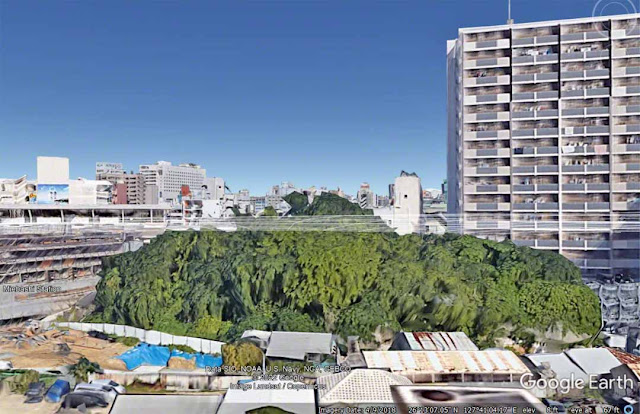 Another scene borrowed from a Google Earth screenshot at ground level.
Miebashi Station is on the left side of the image frame.

Show Us the Ghost!

Alright, alright first let me do some explaining.
After three days of unsuccessfully trying to reach Banksy here's what I decided.
Draw the pictures myself or attempt to sketch them with a pencil and paper.
Should a real artist show up, these sketches will be replaced. I promise. 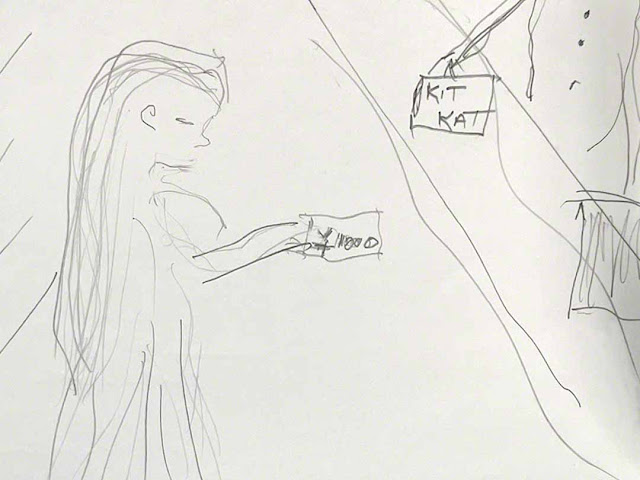 Nearby this grove of trees a young woman would purchase candy around closing time.
She hands the cashier Japanese yen to pay for the sweets. Then off she goes.
The problem is, the next morning the shopkeeper noticed the money had changed.
The yen note had turned into uchikabi (symbolic paper notes) given to dead spirits.

These little mom-and-pop stores are in competition with some big chains.
So, to stay in business, you have to keep an eye on the profits.
Next time that gal comes into the store late at night she's going to be followed home. 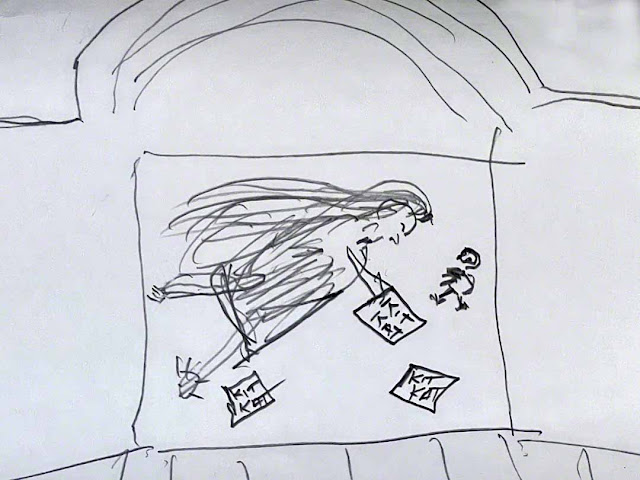 Sure enough, another night the woman comes by and gets more candy, paying with yen.
The store owner follows from a distance. It's dark outside.
The girl with the candy goes into the woods of Nanachi-baka and disappears.
At one of the tombs, a baby could be heard crying. The storekeeper looked inside.
The woman who bought the sweets was dead.  Candy wrappers were near the baby.
Local villagers made sure the mother got a proper burial and raised the child.
The ghost was never seen again.
Happy Halloween!

This is the last time I will try doing sketches!
Posted by RyukyuMike at 12:23 AM

What a artist you are Mike. I enjoyed the drawings and photographs. By the way send me your mailing address. I have a bunch of ripe Carolina Reaper seeds to send to you. You can send me your email address to dkpenebaker@yahoo.com or post it here.