Buddhist Statue of Shinran Shonin in NYC: Give It Back ! 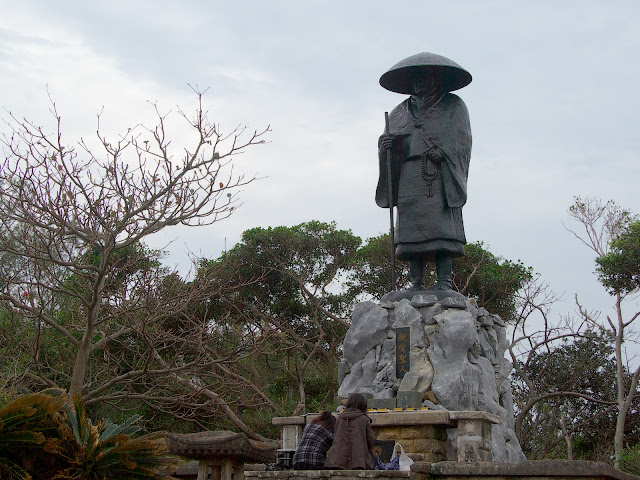 Here is a photo of a Statue of Shinran Shonin I took yesterday. It's something I've seen a few dozen times as one of my friends whizzed by while driving and I always wondered what it was.

It sets back off the highway in a secluded park near the ocean so, you don't see much other than the top portion of the figure silhoutted against the sky when you're in a vehicle.

On the way to do some shooting at the UNESCO: Zakimi-jo (Castle) Museum I was griping to Rusty (driving) about how I'd rather be anywhere than indoors with my camera. It was cloudy outside but, not raining when we cruised on by the statue this time. "Hey, let's go check that staute out" I said.

A quick U-turn and we were parked and grabbing our camera gear to do some shooting. 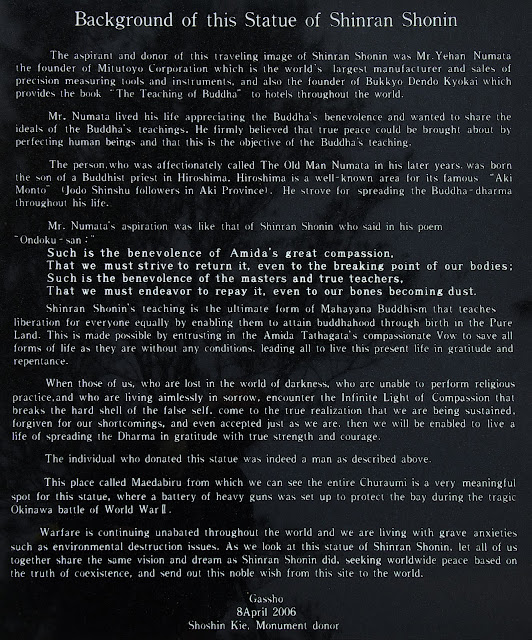 Whenever I see something in English displayed, like this, I have to shoot a photo of it. It helps me do the research afterwards and it's always handy having it filed right along with the rest of the day's photos.

Now, I don't know how most people feel about it but, for some reason, I tend to put more stock in what I read engraved in stone than the things I find on the internet. Consider me a Neanderthal.

It just seems, to me, it'd be easier, if you were a liar, to put stuff online, than to etch it on to a stone.

Today I went and GOOGLED the Statue of Shinran Shonin and found out WIKIPEDIA is at the top of the list but, there's a whole bunch more places that know all about this figure, too.

It seems Shinran Shonin was born in 1173 and at around nine years of age went and got trained as a Buddhist Monk. To make a long story short, he is somebody important to people who practice Buddhism.

The same type Statue of Shinran Shonin you see in my photo taken in Okinawa, Japan can be seen in front of the New York Buddhist Temple on Riverside Drive in Manhattan, New York.

It survived the atomic bombing of Hiroshima. So, somebody decided, "Let's take it to New York" !

Huh ?  I wonder if it ever occurred to to anyone it might be a nice gesture to give it back ?

That is very interesting, isn't it? Good question to ask the Buddhist temple in NYC! Good job looking into this. It's a very striking statue made even more so when you know the story.

Nice! Really enjoyed the picture and write up. I also always photograph statue information for the same reasons.

Nice! Really enjoyed the picture and write up. I also like to take photos of statue plaques and other tourist information for the same reasons.

I liked the line >> it'd be easier, if you were a liar, to put stuff online, than to etch it on to a stone.

Cathy,
Thanks. It would be interesting hearing how the folks running that Temple justify keeping that statue.
Beats me but, I'm not much of a politician, activist or even religious.
Neanderthal, suits me just fine but, this got me scratching my head!

Bethany,
The times I haven't bothered to shoot some of these items, I always end-up wishing I did. Sometimes, the weather or bcrowds make it worth a second or third visit, though.

Randy,
Thank you. I figured, at least the inscription saved me some typing. Glad it's been confirmed, people can actually read it !

Jay,
Yup, I suppose there may have been a few industrious liars along the way who went to all the extra effort and engraved stuff. But, bet there's a lot more who are willing to spin their tales online !

The statue in NYC is in front of a Japanese Buddhist temple in Shinran's lineage. Hiroshima is a major area for Shinran's type of Buddhism (it is by far the majority denomination in the Hiroshima region). The statue was sent by Shinran devotees in Japan to be placed in America as a gesture of post-war healing and reconciliation. So, there's no need for it to go back to Japan, it is there intentionally and serving three good purposes: inspiring Shinran's followers abroad, conjoining two former enemy nations, and serving as a reminder of the horror of war.

transientandpermanent,
That sounds reasonable to me except for a religious figure being needed to remind folks of the horrors of war and wondering how difficult it was for an occupying force to obtain the statue in the name of peace.
It would still be a nice gesture for an American corporation to build a Shinran Shonin Statue and return that special item to the people of Hiroshima, I think.

We should start a petition to get the statue back to it's rightful place. I know this isn't the place for this Mike but whenever I watch anything about Hiroshima or Nagasaki it brings tears to my eyes. I just can't get my head around how they could justify dropping those bombs on innocent women and children.

Ryan,
Walking the ground at Nagasaki and Hiroshima does more than bring tears to eyes.
Now, someone going by the handle "transientandpermanent" tells me, "The statue was sent by Shinran devotees in Japan to be placed in America as a gesture of post-war healing and reconciliation."

But, it's not etched in stone, if you know what I mean.

It wouldn't surprise me if lots of folks up in the Hiroshima area where that statue was "donated" from considered it a National Treasure, or, Religious Artifact and would be pleased to have it back where it belongs.

The statue was donated by devout Japanese Shinran followers and the shipping was paid for by a Japanese businessman. It was sent in 1955, years after the American occupation was over and the Americans had nothing to do with it. 80% of the people killed in the Hiroshima blast where followers of Shinran.

You can read more about the statue at these links:

transientandpermanent,
Thank you for providing these interesting links. I have read them both. Some people would still think it'd be a nice gesture to return the Statue of Shinran Shonin to the ground it came from.

"...
In Manhattan, the one location that has memorialized its atomic connection had nothing to do with making or witnessing the bomb, but rather with managing to survive its fury.

The spot is on Riverside Drive between 105th and 106th Streets. There, in a residential neighborhood, in front of the New York Buddhist Church, is a tall statue of a Japanese Buddhist monk, Shinran Shonin, who lived in the 12th and 13th centuries. In peasant hat and sandals, holding a wooden staff, the saint peers down on the sidewalk.

The statue survived the atomic bombing of Hiroshima, standing a little more than a mile from ground zero. It was brought to New York in 1955. The plaque calls the statue “a testimonial to the atomic bomb devastation and a symbol of lasting hope for world peace.”

The statue stands a few blocks from Columbia University, where much of the bomb program began.

“I wonder how many New Yorkers know about it,” Dr. Norris said of the statue, “and know the history.”
..."

Brian,
Thanks for taking the time to comment. The link doesn't work so, I posted for you. Normally, I consider putting links here as spam. You may not have noticed.

Anyway, here you are. Not sure what point you may have been trying to make, here's all I have to say:

Places I've been and things I've seen, lead me to believe that statue is in the wrong place. Amen.