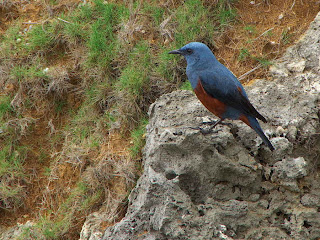 Today will be a short post; I have some quick IRS stuff to do. Waiting untill the last minute isn't such a good idea, so I make the deadline the 14th of April for my taxes !

This Blue Rockthrust is the closest thing we have to a Robin in Okinawa, only we see them year-round. This character put on a great show for me and I wished I'd have brought my 500mm lens instead of just a 250 that day. What I did have though, got the job done; it was windy and I was on the wrong side of a safety fence designed to keep tourists from falling off the cliff. I live here, so I figure the fence wasn't for me; I wanted to get closer to the bird !

Setting up a tripod helped steady the camera. He wasn't moving when I made this shot and that gave me time to move the focus point to get a good bead on his eye. Selective focus and spot metering will give you a much sharper photo, as long as your camera is steady. On a windy day even a tripod can be shaky, so two things I do to get my best shot are wrap the camera strap around something and hold the end of my telescoping lens. Then, just hope for the best! TAX TIME ! More later...
Posted by RyukyuMike at 5:33 AM No comments:

Talk While You Shoot. At the Sakura (桜) Festival 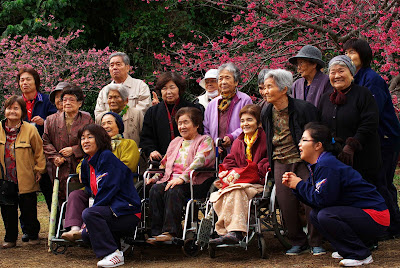 Not a big fan of people photography, I just couldn't resist taking this shot. I was in the mountains of northern Okinawa shooting Sakura (Cherry Blossoms) for a local magazine.

Along came a bus with huge handicapped symbols painted on the sides and several attendants helped the group assemble for a photo under the trees.

When I noticed the little cameras and cellphones they were using, I asked if I could shoot some photos and the attendants agreed. My next question was " Is there an email address I can send the photos to"? No one had an email address or, at least weren't going to give it out to some foreign stranger. Some of the folks in the crowd had already started smiling when they saw that the old man with the big camera, speaking Japanese was going to take their picture, so, I figured I'd better get shooting and forget about the paperwork.

The few times I do shoot photos of people, I always ask permission first and try to get a model release signed after showing the subject a preview on my LCD screen. My forms are in Japanese as well as, English and basically give me the right to have the photo published, entered in contests or anything else I want to do, within the law. In return for their signature, I promise the subject a copy of their photo.

These folks were bussed away when I got distracted and started shooting some birds in the Cherry Blossoms (桜). If only I had gotten a picture of the bus so my wife could track-down the name of the rehabilitation center they had come from ! 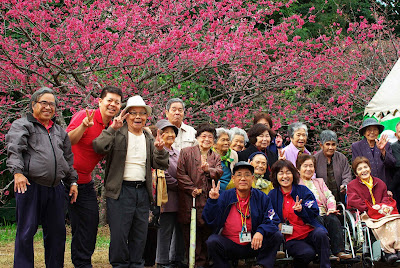 There was a series of about a dozen shots I had taken, moving from right to left and talking as I fired away. At first, not everyone was smiling. The tall gentleman standing in the left side of the first picture actually was wearing a frown as if, maybe he didn't want some foreigner snapping his picture.

By the time I shot this last picture he was having a hard time holding his smile back! How'd I do it?


There's an ancient language in Okinawa that's not Japanese: Uchinaguchi, or Okinawa Hogan that only older folks speak. For many years it was banned by the government of Japan and could not be taught in the schools. When I used the old Okinawan dialect and told everyone how young they looked and how pretty the women were, they LOVED IT !


Depending how you intend to use a photo and the laws of the land you want to use it in you may or may not need a signed release. Newspapers, being editorial in nature, may not require a release. Some places regard a crowd of 16 people or more as being a public event, and no release is required. Other places require a release form signed for every recognizable person in the photo. General rule of thumb: ALWAYS GET SIGNED RELEASES, even if you're taking a picture of someone's dog, and especially, if you're taking a picture of someone's minor child !

Okinawa is a small island, so. I will eventually track this group down, not to get a release form signed; just to present them a framed copy of their favorite photo, because, that's the way I am !
Posted by RyukyuMike at 6:17 PM 2 comments:

Even though I complain about the hours a day I spend getting my face blasted by whatever a computer monitor emits that makes me an old grouch, you just can't beat some of the great contacts you can meet online.
This butterfly photo was taken just this past Friday and I uploaded it to a website without having a clue as to what the common name of the critter might be, so I titled it "Who Knows?" and explained my predicament; Grandkids still on Spring Break and no time for research !
Wildlife Photographers are supposed to give you the names of what they shoot. common as well as the scientific name. This butterfly lives in Southeast Asia, India and maybe even in Australia. It likes pine trees and places where there's alot of rainfall. It flies fast and in a zig-zag pattern, so to get a good shot at it, you're going to have to wait until it lands. They even fly 5000-7000 feet above sea level.
There's a great website I use for identifying butterflies in Japan and I got it from a contact I met at JPG Magazine. The only problem is I'd have to squint through about 3000 postage stamp-sized images to try and find it. If you guess at a name and you're wrong when you post it, the whole world will let you know about it ! So, my plan was to wait until next week sometime and do the research when all the house guests I have are back in school.
To my surprise, this morning when I fired-up my laptops and visited the dozen or so contacts I have, "BINGO" my butterfly was named ! And this time it was another contact at JPG Magazine, living in the good ol' USA.
When you learn how to keep the amount of contacts you have on different websites down to a number you can handle, they become invaluable. You admire and comment on each other's photos and share ideas, and actually learn from each other.....