So far, I've found two scientific names for this bird.

Hypsipetes amaurotis has been used for several years as a nomenclature.

See Avibase for all the data.

Experts at analyzing bird things came up with a new Latin name for us.

These characters can screech really loud.

Being hearing impaired, they don't really bother me with the racket they make.

But, I do remember them, eating my tomatoes.

The varmints would poke holes in your food, just to steal the seeds.

And, you'd be left with a bunch of holy, rotting tomatoes.

It you grow your own veges and hear these birds coming, get some nets over the plants.

Or, do what I did. Quit gardening and, let somebody else worry about it.


More About the Brown-eared Bulbul

Posted by RyukyuMike at 3:49 AM No comments:

Anas zonorhyncha would be the scientific name for these birds.

They are migratory visitors to the Ryukyu islands.

Read more about them at South Dakota Birds and Birding.

More, in Japanese, at Wildlife Okinawa
Posted by RyukyuMike at 5:42 AM No comments: 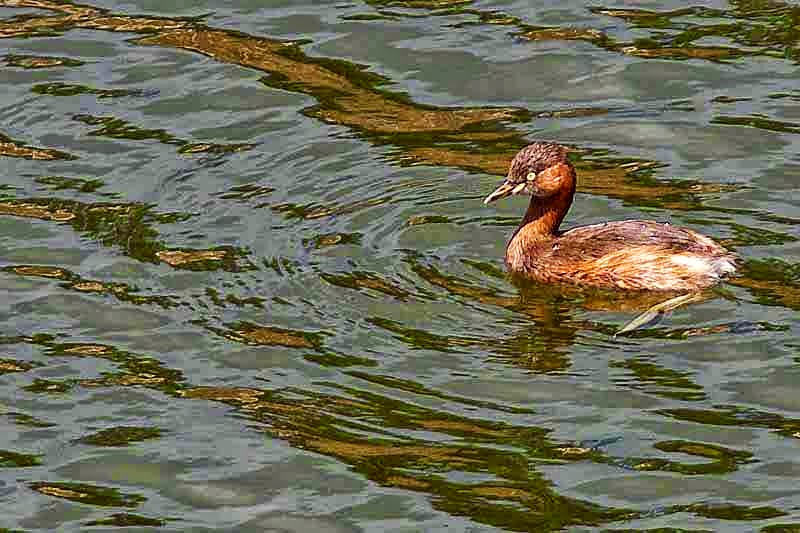 These are some tiny creatures that live on fresh water and dive for fish.

Learn more about this bird at ARKive

Posted by RyukyuMike at 3:36 AM No comments:

The Teahouse of the August Moon Arrived 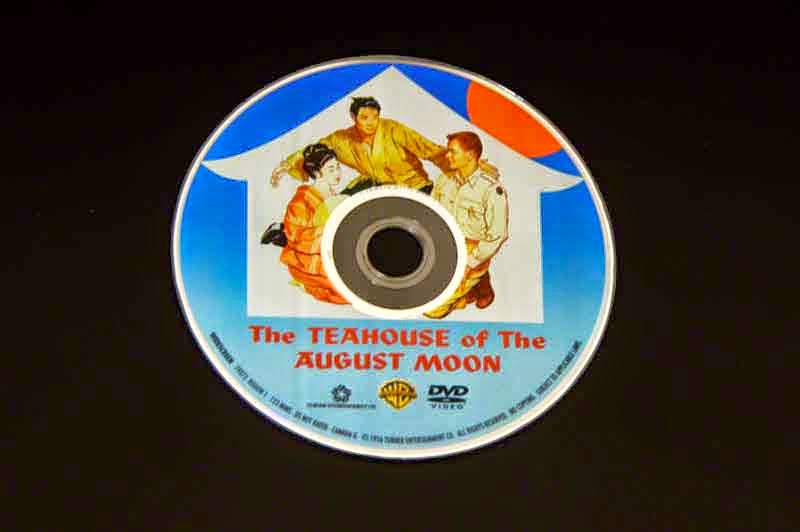 Have no fear, I'm not going into the business of doing movie reviews.

Last year,  having visited the Juri-uma Parade in Naha, I tried to order this movie.

Many times people ask if, I've ever photographed the teahouse in Naha.

Online, I tried ordering through Amazon and, they were out of stock. 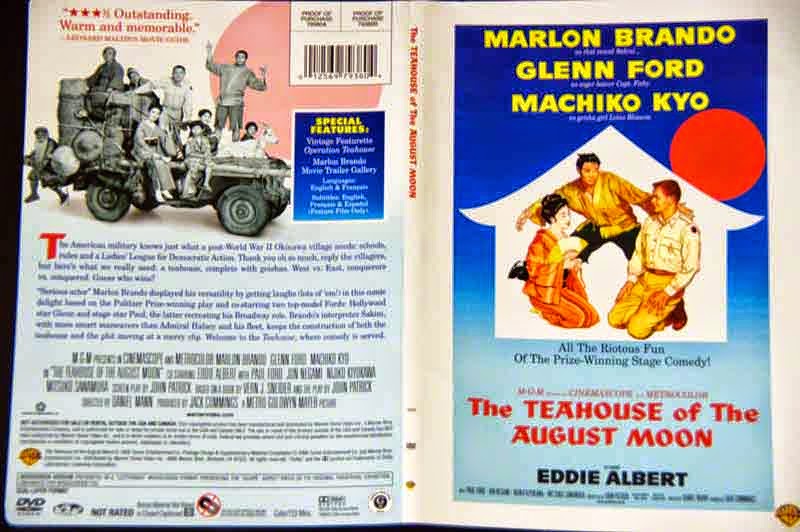 Gearing up for the festivities in Tsuji, again this year, I went to Amazon once more.

And, Bingo -- For the price of a few beers, the DVD came through.

Picturing Marlon Brando, as any kind of Asian, is a bit difficult but, he is hilarious.

The rest of the actors, playing roles of US military officers, are most excellent.

They act like something which rhymes with pampas grasses.

We still see a lot of them, proudly serving their country, over here, today.

The Movie was not Filmed in Okinawa

Eleven acres of land were used for movie set and Tea House of the August Moon.

The Teahouse of the August Moon in the Tsuji district of Naha, Okinawa wasn't in the movie. 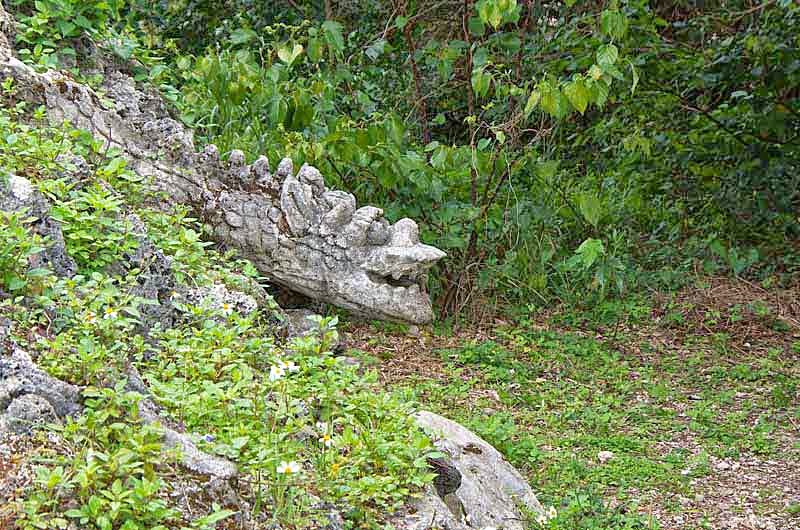 Anyone interested in finding the location of the impostor teahouse, should go here.

When composing this shot of a concrete dragon, I was standing right on the spot.

Looking at a friends photos from way back, I found it.

The Teahouse of the August Moon, in Tsuji, was right over this piece of ground.

Brilliant Colors and Dancing with Horses

Have You Ever Heard of the Parade of the Prostitutes ?

Prayer Before a Festive Occasion in the Ryukyu Islands

The Most Special Rock I've Ever Seen on Okinawa 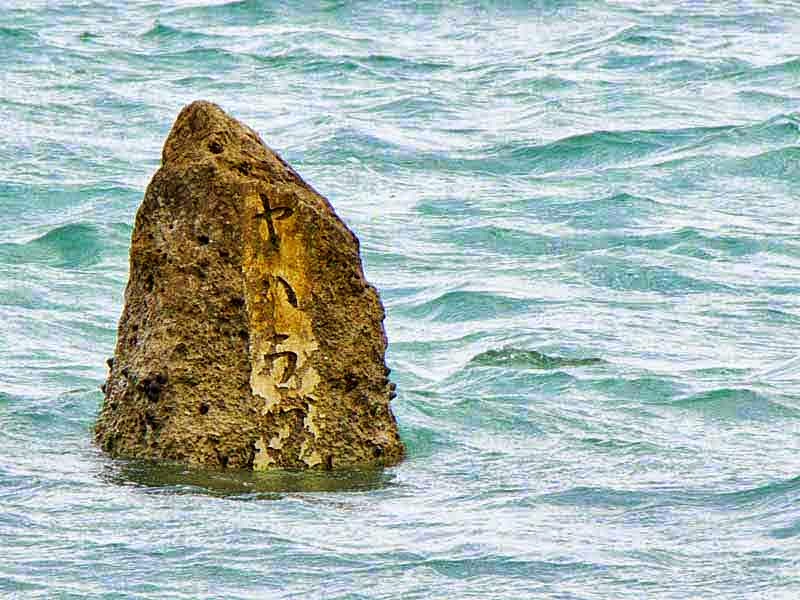 This stone is a monument, marking a spot on the east coast of Okinawa.

It is said, the creator of the Ryukyu Islands set foot on the main island, here.

Yaharazukasa is the name of this historical rock.

The tide was in when we discovered it so, I couldn't just walk over to see the whole stone.

At low tide, someday, I'll get the full picture for you.

The legendary goddess, Amamikiyo, passed through this spot, coming from Kudaka Island.

And, I have a list of all the places, she visited next.

So, some sort of pilgrimage, could be made, through this area in Nanjo City.

For those, not so interested, in pilgrim stuff, I have a surprise.

Non-pilgrims could go paragliding, right near this sacred stone !

Related Post: Paragliding in Okinawa
Posted by RyukyuMike at 3:12 AM No comments:

Freak Wildlife Photo of the Month 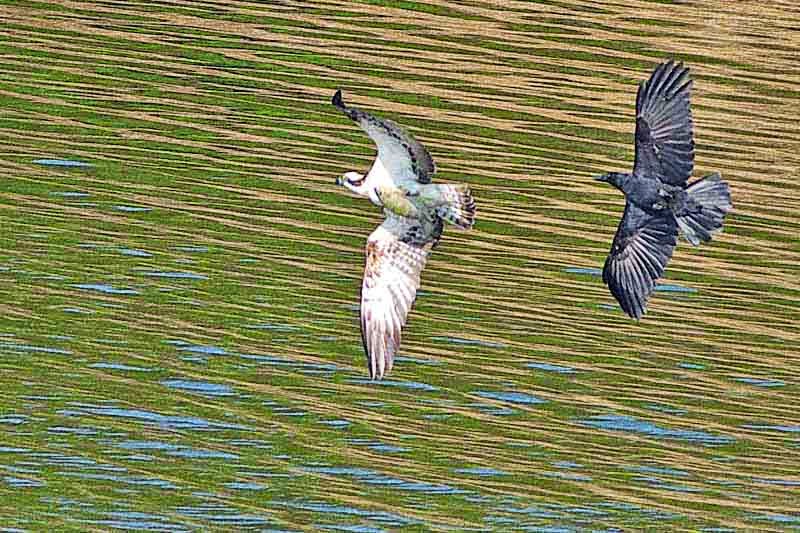 An Osprey in Flight with Fish -- Chased by a Crow

Rituals Before a Parade

The scene above occurred at the start of juri-uma in the Tsuji district of Naha, Okinawa.

Leading visits to each sacred site are these two special women.

Just being allowed to attend and, photograph these events, is enough to satisfy me.

But, some people want to know more of the mystery behind the scenes.

For those, who like to dig deeper into the rituals and culture, I find some links:

The Yuta, The Noro And The "Okinawan Witch Trials"

Enter the Yuta (Okinawa: Reports from Japan and America)


There You Have It

There's probably enough information up there to write your own dissertation.

All this research and reading is fine for most folks.

But, I prefer what, I call flip-flops on the ground-type research.

So, I plan on making a few more trips back to Tsuji, where I can talk to real people.

Wouldn't it be nice to know if the place is full of holy ladies or, hookers ?

Tamashigi (タマシギ) is What this Bird is Called in Japan

Early morning is the best time to photograph these critters.

It's a good idea to know the name of the birds, in Japanese so, I looked it up.

If some farmer, were to ask me what I was looking for, I'd tell him, Tamashigi.

They don't speak much Latin around here.

The Japanese name got memorized and, written on a note in my pocket.

Down to the marshes and farmland, I went, just as the sun was rising. 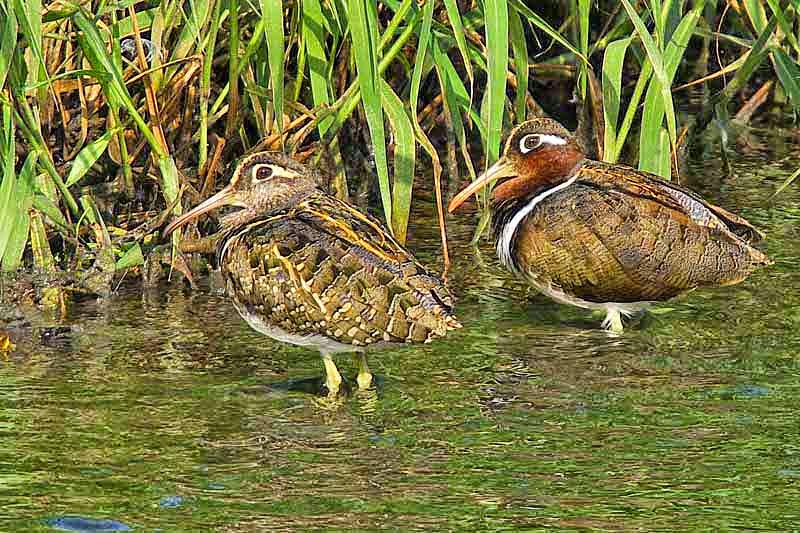 This pair of Tamashigi birds was posing for me before 9AM today.

The male must have had some work to do and, he left the scene.

The female bird, looked like she was falling asleep.

As soon as, I had my fill of photos, I packed up and hiked back to town.

While this GIF was being created, I was in the office, taking a nap !

Posted by RyukyuMike at 1:28 AM No comments:

There were a couple of  firsts, I witnessed at the sabani races, yesterday.

Once they got it up-righted, one guy started bailing water out with his hat !

This boat with twin sails also, had an outrigger.

So, it would take some fairly rough seas to tip this one over.

The yellow archway, in the background of this photo was the entrance to a festival.

That meant, after getting done with  boat races, I'd be going to the Ginoza Matsuri.

The skies went from blue to grey and, back again, throughout the event.

Even though we were in Kin Bay, the boats were rocking and rolling.

Everybody is required to wear life jackets.

Even the dog, in the back of that second sabani boat, is equipped with one.

There was a little guy on Spring vacation from grade school, in this boat.

He'll have some stories to tell his friends when he goes back to school.

We were sailing around and things seemed a bit monotonous for a minute or two.

All of a sudden, all hell broke loose, because a boat capsized.

My boat driver was on a serious mission.

He gunned the engine and almost threw everyone on his boat, over the side-rails.

Sometimes, they dump the boats over, just for practice.

They had the boat turned back up and bailed out, in just a few minutes.

Everything turned out alright and, my two biggest fears, never happened.

#1.  I didn't want to see anybody, we were supposed to rescue, whacked in the head with a propeller.

#2. They didn't run out of hamburgers at the festival before I arrived.
Posted by RyukyuMike at 5:25 AM 2 comments:

Views of the Sailing Sabani Boats in Kin Bay

The 1st sailing sabani race of 2015 was held today.

It's a blast, capturing these events with a digital camera, bouncing around on the ocean.

Out of the seven hundred and, something images, taken this morning, here are a few GIFs.

There were only five boats in the competition and, I hope, I got them all.

If I had a choice, I'd rather be shooting my camera with my feet planted on some earth.

Riding a safety/escort boat, I was out at sea, looking towards the shore.

With a combination of sails and paddles, these boats move quickly.

So, every once in awhile the safety boat dude,  guns his engines real fast.

And, the cameraman cusses, as he almost gets thrown overboard.

It got me thinking.  There must be an easier way to get these photos.


Like, couldn't they rent one of those Goodyear blimps ?

What the Heck is a Sabani ?

Okinawa's Sabani Sailing People
Posted by RyukyuMike at 4:06 AM No comments:

7 GIFs of Birds in or Near Water

In numerical order as downloaded from the camera, here they come.

The bird in lower left of the frame arrived on the scene as, I was shooting the snipe.

It appears to be a Spotted Greenshank (Tringa guttifer) but, I could be mistaken.

It upset the male, Painted Snipe and, he would soon take off.

From left to right, we have a female and male Painted Snipe, preening.

They kept popping in and out of the frames as, I was photographing the Snipes.

This rascal, appears to be a Grey-tailed Tattler.

The bird is not, standing in the water.  It kept its feet on dry land.

The Latin name for this specimen: Heteroscelus brevipes

The rain started coming down while shooting this scene.

The bird was blinking its eyes but, didn't seem to mind getting wet.

It is a Common Greenshank (Tringa nebularia) and, is a wading bird by nature.

This is the same bird as in the previous photo, shot from a different angle.

The Greenshank was the easiest bird to approach with the camera.

Either it was a photogenic or, just didn't feel like flying in the rain.

A little shower, like this, doesn't bother me, too much.

It cleans the air and, makes things smell a lot better.

It also, makes for some interesting colors, shadows, light and, reflections.

Do you ever shoot your cameras in the rain ?
Posted by RyukyuMike at 3:25 AM No comments:

Migratory visitors to the Ryukyu Islands, they sure brighten things up on a rainy day.

A little cloud burst opened, while I was out shooting the cameras.

Rather than, run for cover (like some sane person) I decided to see what the birds would do.

Just in case, you were wondering what they call these birds in French, I got it for you:

Learn more about the species at ARKive
Posted by RyukyuMike at 5:57 AM 4 comments:

10 Images of Osprey Birds in Flight

Over Kin Dam in Okinawa Japan

These photos were taken over a two hour period this morning.

The Pentax K3 and 300mm lens were used, along with a tripod. 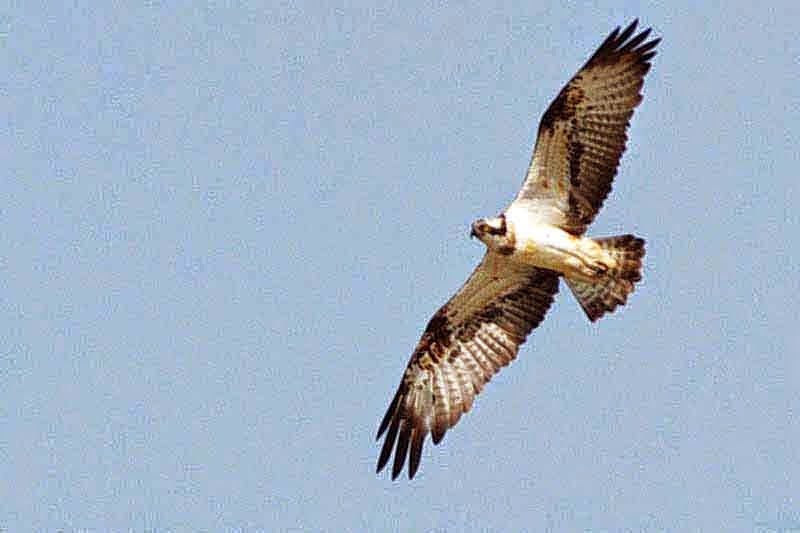 It was 9:33AM when the first subject appeared. 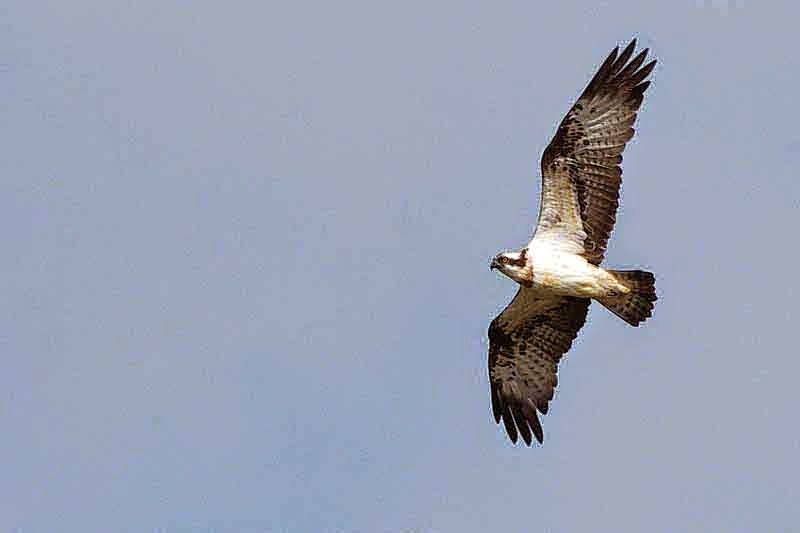 When they fly over water, they are looking for fish. 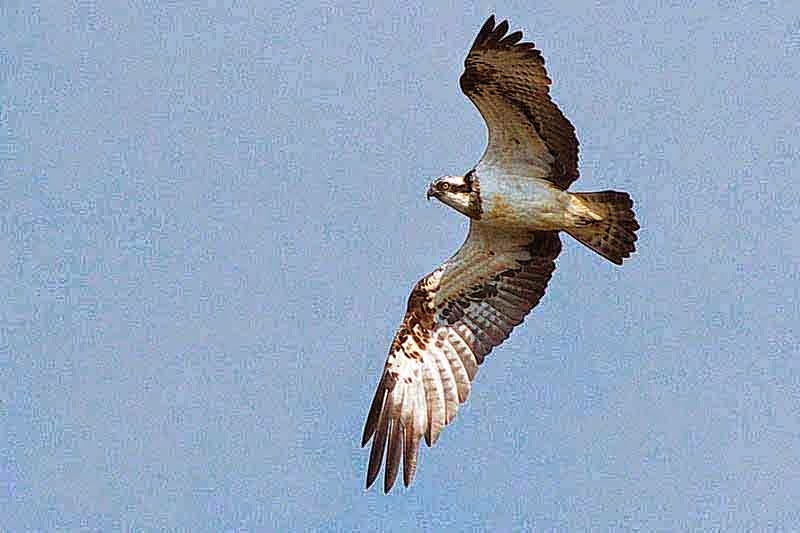 Catching them with the sun lighting up their eyes can be a challenge. 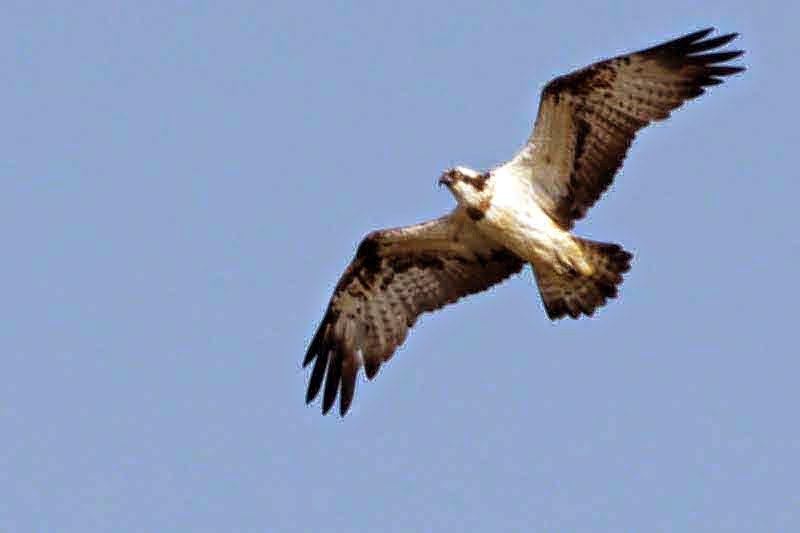 They eat fish from the ocean or, fresh water. 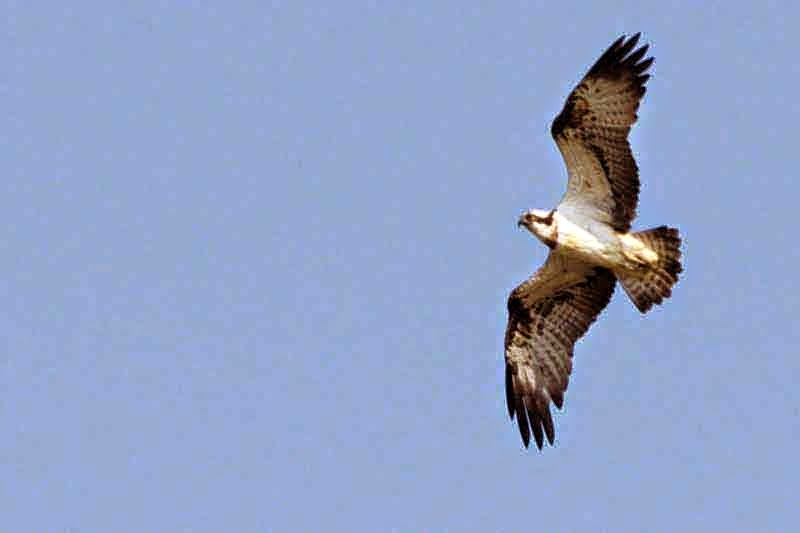 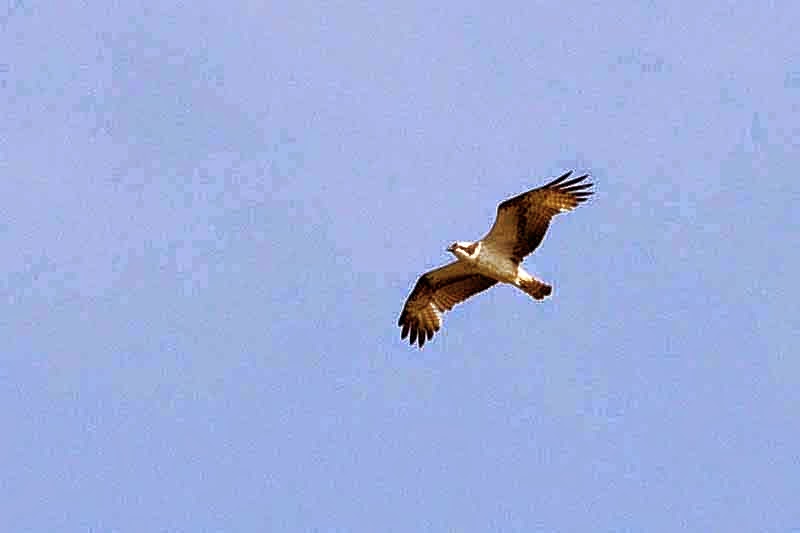 Pandion haliaetus is their scientific name. 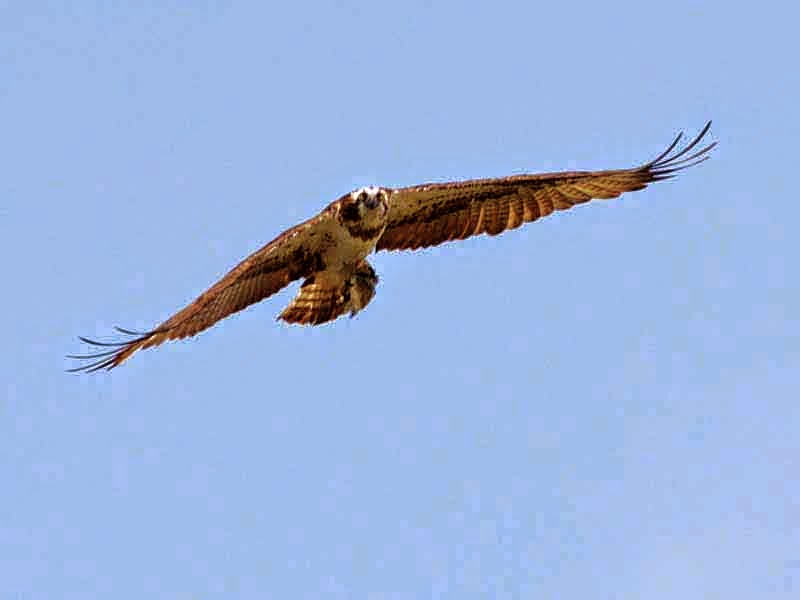 These birds are the only raptors with white bellies. 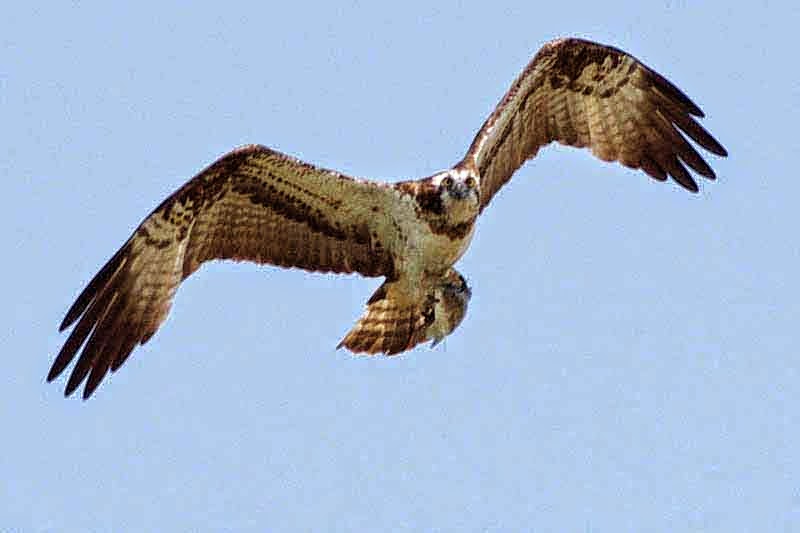 The white head and brown mask over the eyes makes identification of  this bird, easy. 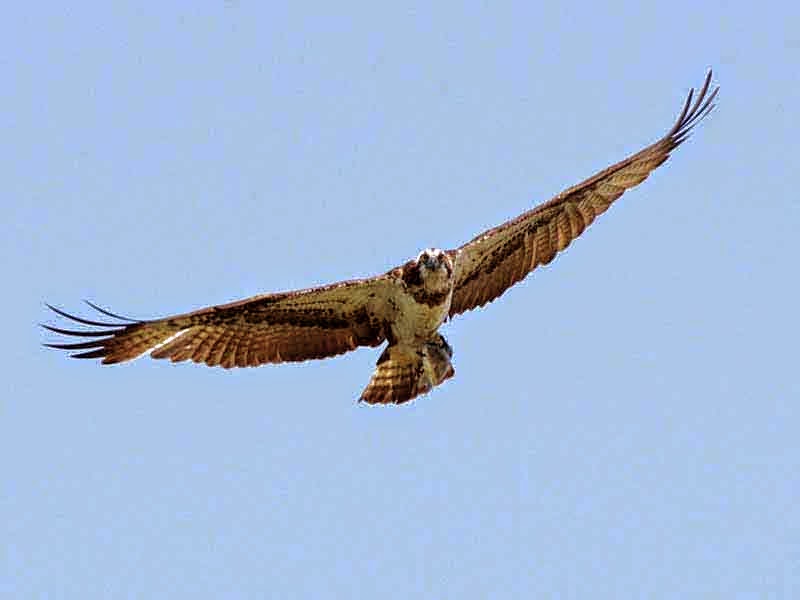 Ospreys voluntarily, close their nostrils when they dive for fish in the water. 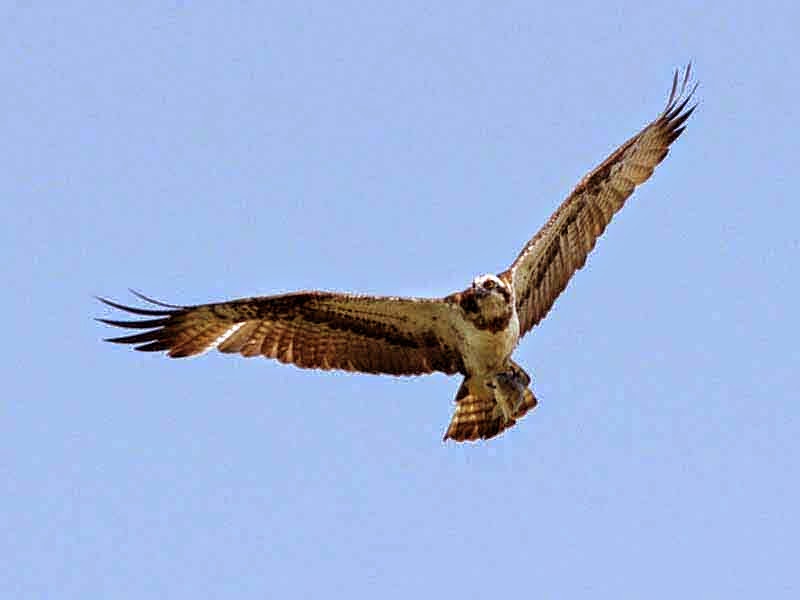 These  birds a third eyelid which is transparent.

This membrane can be closed when under water, serving as goggles, while they catch their prey.

Learn More About Ospreys at Cornell Lab of Ornithology
Posted by RyukyuMike at 4:59 AM No comments:

Entertained by a Grey-faced Buzzard Eagle 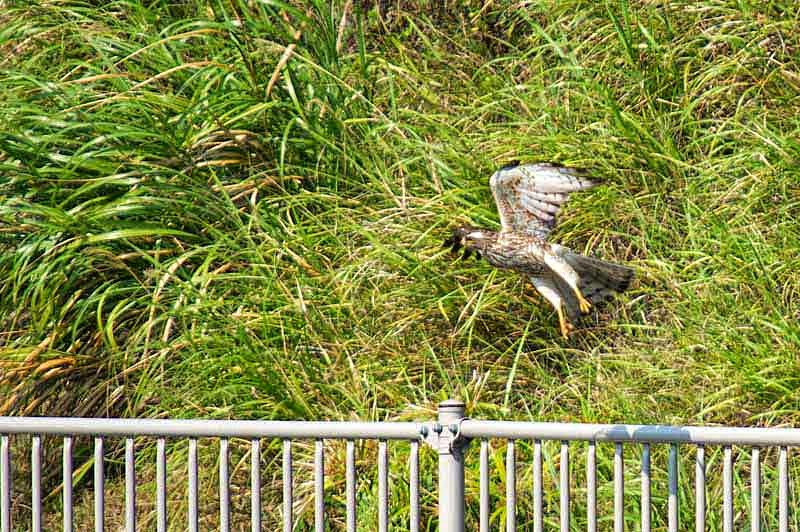 A good cure for a St. Patrick's Day hangover was discovered today. 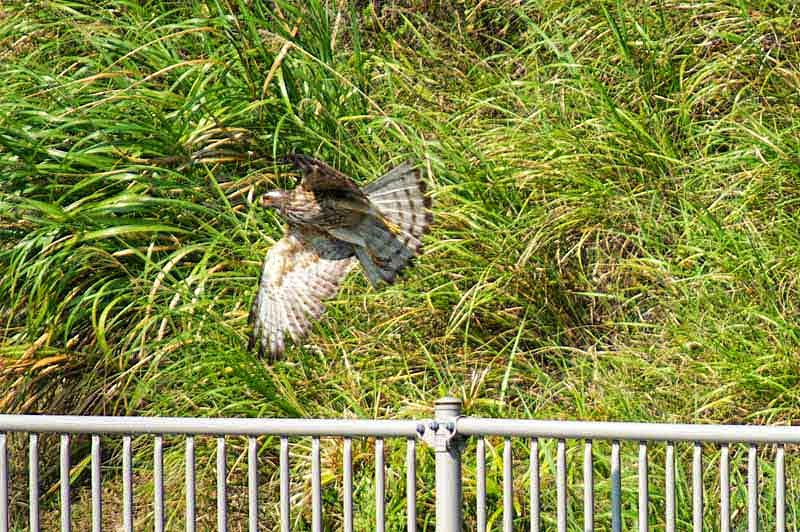 This bird of prey used a fence at the dam as a perch and lookout. 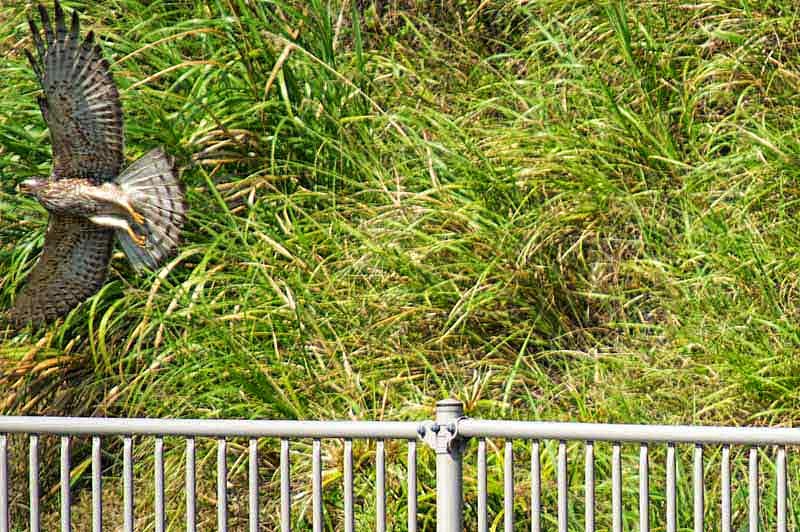 It kept launching from the fence to catch meals of insects.

After it munched on a meal, the bird would return to the fence.

On a nice day, a person could sit and watch this activity for hours.

It all took place at the Kin Dam.

So, if anybody is wondering where to find me, for the rest of this week look for this fence.

The plan is, to go back and get some more dam therapy !
Posted by RyukyuMike at 6:58 AM No comments: