The Torii Gate, Does It Lead to a Shrine or Temple?: Japan Insider's Tip 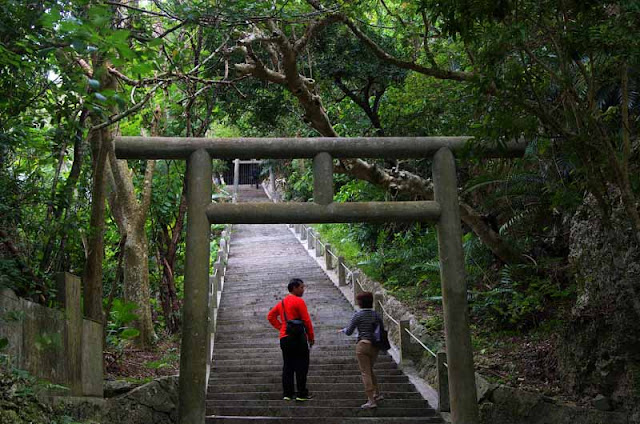 This can be a tough question to answer.

There are torii gates at hundreds maybe, thousands of locations throughout Japan.

The Torii Gate.  What does it lead to, a Shrine or a Temple ?

The simple RyukyuMike answer has always been, "It leads to a sacred site".

That way, I know I'm telling the truth.

Telling the difference between a shrine and a temple gets a little more confusing.

Just the other night, there was a discussion between a few of us on this topic.

To me, shrines and temples are both sacred places but, I never bothered to research and find out the difference between the two.

Well, a good citizen, named, Jun Ikemura must have heard me worrying about it and published an article that explains the difference between a shrine and temple.

Shrines:  There is a god, spirit, kamisama, or some sort of deity enshrined in a Shrine.

Temples:  This is Japan, I'm talking about, not Europe, USA, or the Mid East so, no hate mail.  OK?

Temples are places for Buddha.

Sounds like a simple enough explanation for me.  So, that's the story I'm sticking with, for now.

In the above photo, there is a torii at the bottom of the stairs.

After you walk up all 108 stairs, there is another torii at the top.  Passing through that torii, you come to a cave.  The cave is a shrine dedicated to the Okinawan gods, Amamichu and Shirumichu who, according to legend, lived there and took on human forms, way before Buddhism became fashionable in Japan.

Today you may pass through a torii gate and enter a place that is both, a sacred Shinto site and a place where a Buddha is present.  So, you may find both, a shrine and a temple on the same grounds.

HERE IS THE FULL ARTICLE BY JUN IKEMURA

Posted by RyukyuMike at 8:02 PM

I always thought it was towards a temple- but I like your answer better! Great shot!

Jade,
Always trying to keep the peace, I am. Thanks !

I like it when people wearing bright colours walk in front of my camera!

Thanks Mike for posting this. I think it helps settle a lot of questions at the moment.

A shrine or a temple, I love them all. Lovely shot Mike, and Happy New Year!

Excellent explanation and description plus another beautiful shot.

Never heard of this before. Thanks for the beautiful picture and educating me!

I saw these when on Okinawa over forty years ago, but never quite understood their significance until now. Thanks!

Never thought about the difference between shrines and temples before. This is really interesting. Very nice photo of the torii -- didn't know about those before either. I guess I need a trip to Japan!

RyukyuRu,
It wouldn't be my sole source of information but, it's the best I could find at the moment.

Nancie,
Thank you and a Happy, Prosperous New Year to you, too !

Leigh,
Thank you. Glad you liked it.

Jackie,
Thank you. Serene; I'll have to look that one up!

Debbie,
Thanks and you're welcome.

Dick Jordan,
Forty years ago? You may have seen me, too !

Cathy,
C'mon over. We'll find room for you somewhere !

Average Traveller,
The bright red shirt does help make the colors in that scene pop.
He's one of my Ryukyu Friends who was unaware I was shooting him !

Am I correct in assuming that most Buddhist temples are perched on the top of mountains usually preceded by thousands of stairs? You gotta be fit to be one of those Buddhist dudes.

I want to walk through that gate. Nice shot, Mike.

Denise,
Unknown to the guy in the red shirt, he provided some flashy color !

Ryan,
Around Okinawa, I'd say, the Shinto Shrines tend to be up on hills. Many Buddhist Temples are on level ground, though, some are up there aways.

Sophie,
It's kinda spooky up there. It is a shrine rather than a temple.

There. Now they can send the hate mail to me.

Paul Frank,
Ya silver-tongued devil. Hope you don't get any hate mail, either!