Flower and Seed (Photos) The Mangrove Tree of Okinawa 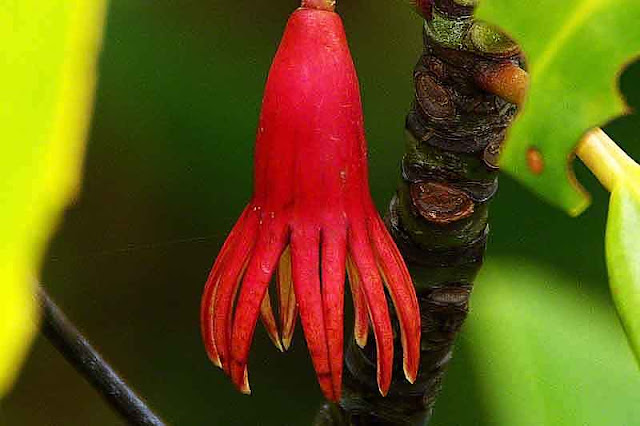 This Mangrove Flower (Bruguiera gymnorrhiza) photo was taken along the banks of the Okukubi River in Kin Cho Kin Okinawa, Japan during the month of October.

Inside the flower are what you could call little zipper bags of pollen.

When birds go poking around in the flowers, the zipper bags open and give the bird's head a good dusting.

The birds go from flower to flower pollinating without even knowing it. 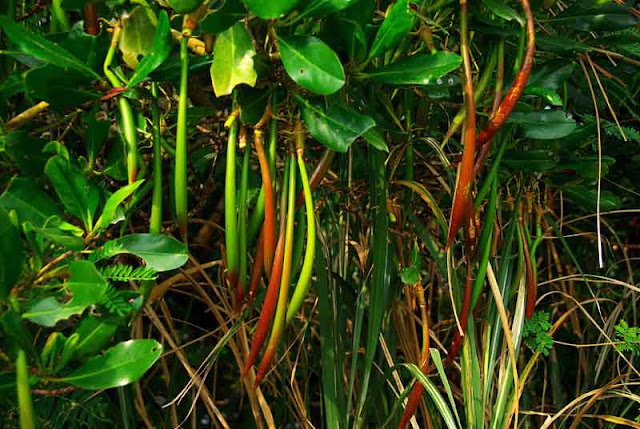 The results of all this pollinating going on back in October can be seen in this photo taken on April Fool's Day at the same location.

The seedlings look like some sort of beans and I hear some folks eat them if there isn't anything better to be found.

Not me, buddy.  I'll stick with spinach.

It's best not to fool around with these seeds because the mangroves happen to be on the IUCN Red List of Threatened Species.

They are some of the oldest mangrove trees in the world and may be found in Madagascar, Sri Lanka, the Malay Peninsula, Micronesia, Polynesia and Australia.

If you catch anybody picking the seeds, tell them to "GIT" and go buy some spinach, instead !

To read more about Mangroves visit:

Posted by RyukyuMike at 7:22 PM

That flower is pretty! I wonder if the seed tastes good... not like I would try. Spinach it is!

Alison,
Just guessing, here. I'm thinking even canned spinach would taste better, when they say people eat the things only if nothing else is available!