Here are five of the Sunday's Silly Signs that, Google Stats tell me, got the most giggles.
SMOKERS AND CHEWERS 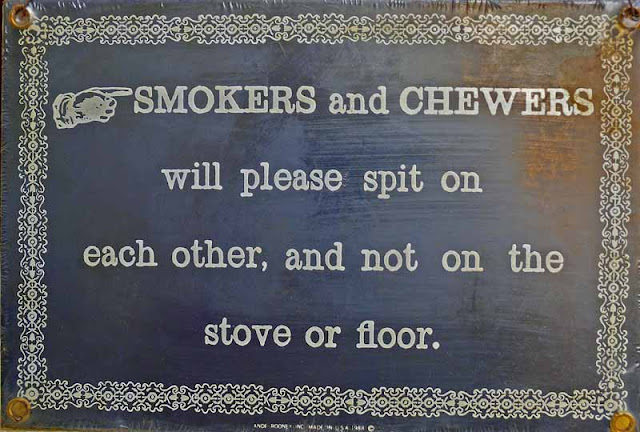 Maw, we better get a new sign or have this one repainted.
Don't want customers comin' in here and thinkin the place is tacky.
Folks, I hate to tell you but, this sign has been hanging on the wall
in my karaoke bar for, heck, I don't know
maybe ten or fifteen years !
A LIT CIGARETTE 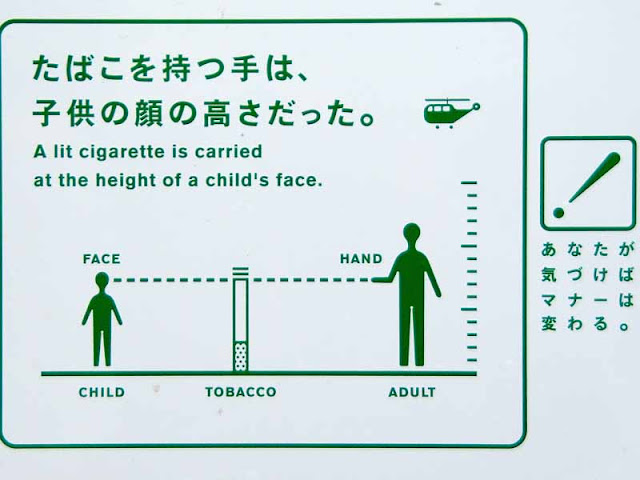 Whoa, Sunday's Silly Sign alomst slipped through the cracks on me this week.  It may already be Monday, where you are but, I haven't forgotten you.  Here's one I discovered in Naha Okinawa, Japan.

That Mayor back in New York City, I hear, is going to ban all outdoor smoking.  He's probably worried about kids gettin their faces burnt by cigarettes, too.

Now this got me wondering. Kids who aren't much taller than a cigarette probably hang around inside the house. That's the same place all the smokers will be lighting up their tobacco.

The mayor should do like us and post these signs. Let folks smoke outside.  Police flying around will catch them if they burn any little kids faces and we'll get the criminals in jail where they belong! 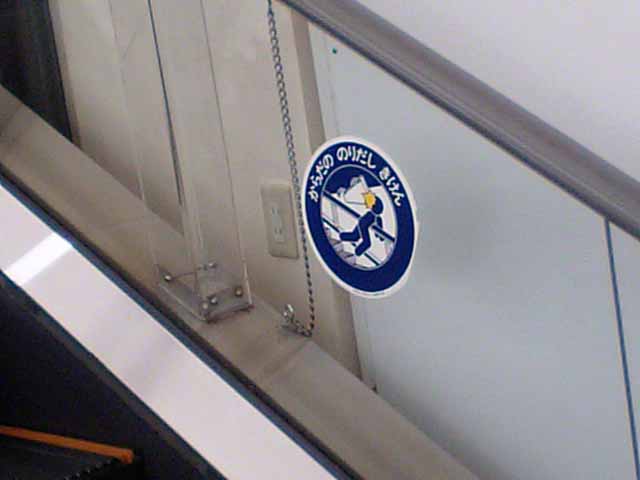 These signs may be seen in just about any store in Japan that has an escalator.  Call this a drive by shooting. RyukyuMike has been banned from taking photos with a real camera in this store so, the only option I had the other day was  do like everybody else; don't ask and just shoot with my cell phone camera. 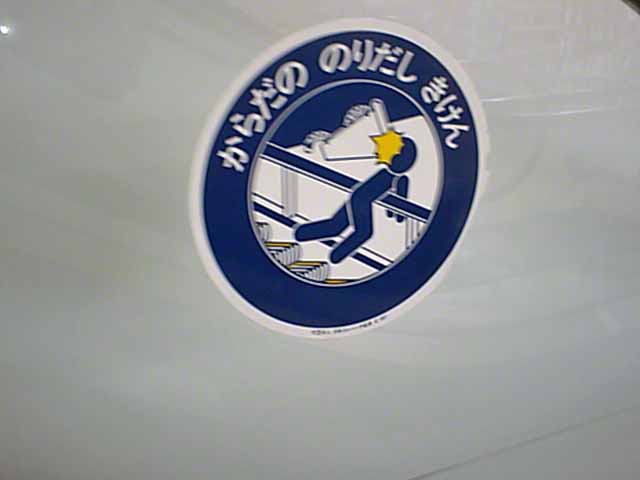 The silly sign isn't at the bottom or the top of the escalator. That would have made it easy to snap a photo.

What I had to do was send the wife up ahead of me. Then, jump on the escalator , whip out my cell phone, crouch down and make sure it was in the Photo Mode, try not to loose my balance and get the cheap camera to focus on a moving target.

Well, the danged steps on that contraption move too fast for a gentleman of my age and the stupid camera wouldn't focus fast enough. So, it took me several attempts, going up and down the escalator.

The wife wouldn't go along with my plan after the first unsuccessful attempt. Women get embarrassed, I guess, when men do stupid things.

So, I told her to just keep all the salespeople busy so they wouldn't notice me riding up and down the escalator half a dozen times. She could cause a distraction on the second floor like, pretend she had a few thousand dollars to spend on underwear and jewelry. That'd cause a distraction. I've done it before. 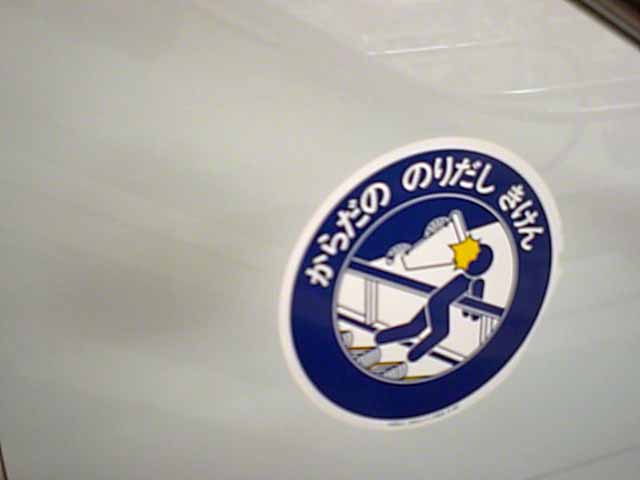 After several attempts, these drive by shooting-looking photos for this week's Sunday Silly Sign are going to have to do the trick. I deleted 10 or so worse ones than these.

One time, I was squatting on the stairs, riding on the down side and figured the camera might focus and snap the photo quicker with the flash turned on. The silly sign was near the bottom third of the ride. I was concentrating on my shooting and not paying attention to how close it was to the first floor.

You know what happens when you get to the end of the ride and forget to step off ?
The thing throws you off and you land sprawled out on the floor.

People were looking at me like I was crazy. Hah !

In case you haven't figured the sign out, yet, it warns people not to hang over the handrails while riding the thing. That's so you don't bonk your head on something like the ceiling of the second floor.

Probably, after they saw what happened to me, they should make a sign warning people to be careful while using their cell phones on the escalators. The thing could throw you off going up or down, if you're not paying attention, I bet.  Maybe, I'll just take the stairs next time.


SUNDAY'S SILLY SIGN PLUS: THE SILLY WIKI STUFF IN JAPAN 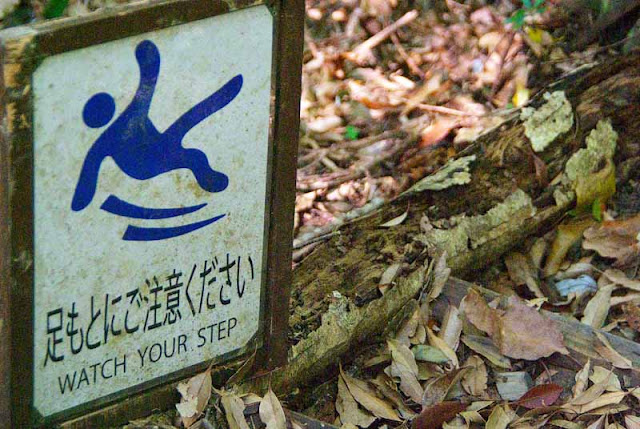 On Easter Sunday we don't really get into the Easter Bunny, eggs hunts, chocolate mess and all that stuff over here in Okinawa. Some people go to church and wear Easter Bonnets, I guess.

That'd be down around the big cities. I only know it's Easter from people online wishing me a happy one. 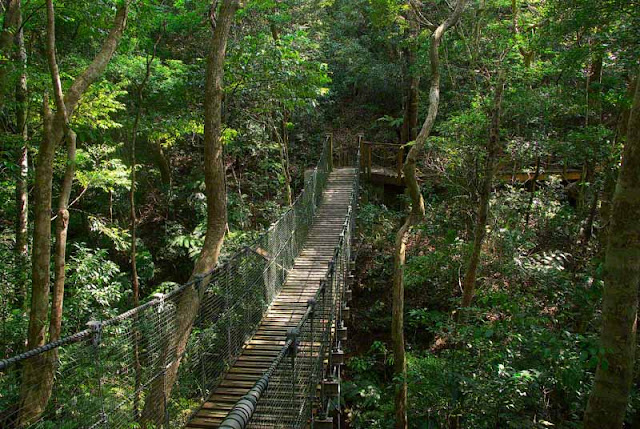 Anyway, I went back up in the northern mountains to see what I could find for today's blog and came across this sign warning you, if you don't watch your step, you might fall on your butt. 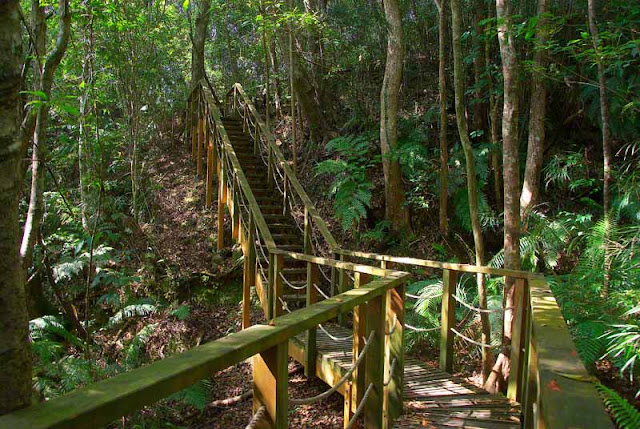 There are plenty of places along this trail where you could slip, trip, stumble or fall and plenty of these signs to warn you. The silly signs just didn't do the trick for me today.

I hiked all over the mountains and just couldn't find anything that cracked me up. 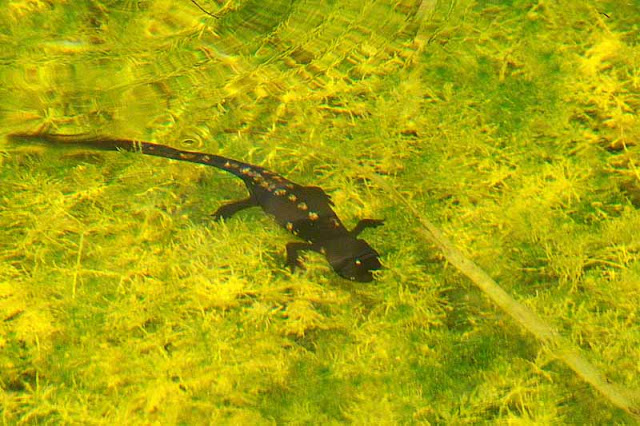 After getting out of the dark jungles and into some decent sunlight I came across a pond with these critters in it and figured, maybe, they were some kind of endangered species. 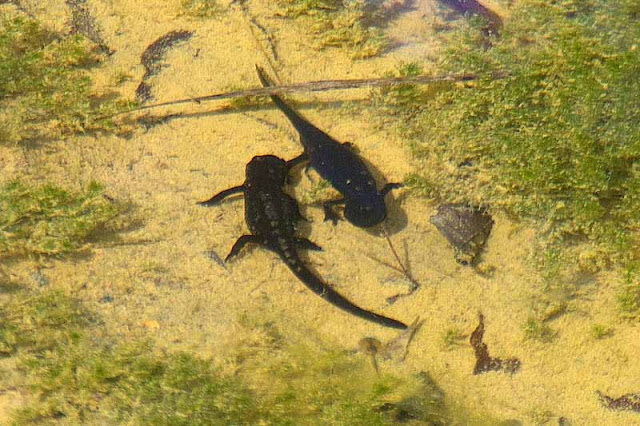 When a couple of them got real close to each other I got thinking, "Oh boy, we're gonna see some action". 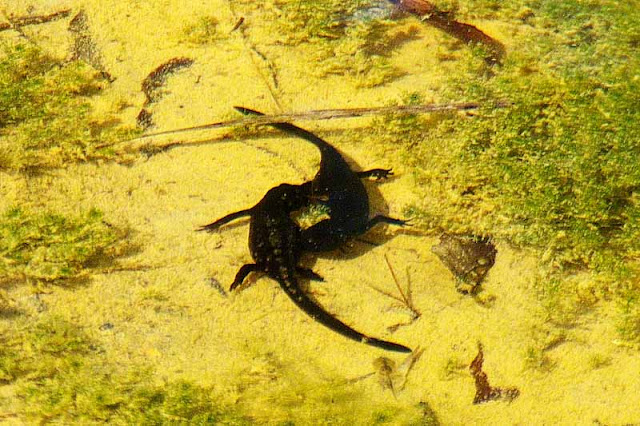 But, all they did was check each other's packages, sniff, or whatever they do and went their separate ways.

When I got out of the woods and off the nature trail I went and asked this nature dude if he could give me the name of these critters I had on my camera. I was hoping they were some kind of endangered species and I wanted a scientific name so I wouldn't have to do so much research when I got home.

"Shirikenimori", he tells me and he helped me translate it from his Japanese wildlife book into English.

Together we came up with "Shi Ri Ken I Mori" and he made sure I wrote it down in proper English.

And he made sure I returned his pencil.  It almost went in my pocket.

Nice guy, he was. He even spoke a little English and was very helpful.

But, he didn't have a scientific name for the critter. No problem, I Google stuff.

That lead me to plenty of sources but, my favorite source was Wikipedia Japan.  This just made my day because I hadn't had a good belly-laugh like this in awhile. So, I'll quote directly from the Wiki folks in Japan and post a link and hope they don't mind.  I want them to take full credit for this masterpiece:

My guess is maybe they couldn't afford an educated translator so, they just grabbed somebody out of a bar.  Like they were in a hurry to finish their Wikipedia homework.
So, they found some homeless dude or a drunk sailor and asked, "What would you call this tail sticking out of this newt ?  It looks like a sword to us."

It's all RIGHT HERE.  You can call me old-fashioned.  I would have thought something like "sword tail" would have gotten the job done.  And it wouldn't have sounded so silly.  It did CRACK ME UP !

It turns out, the Cynops ensicauda (Shirikenimori) or, Sword-tail Newt, is an endangered species found in Okinawa, Japan.  I'll be heading back up that way to try and get some better photos, now that I know where they can be found.  I'll keep my eyes open for more silly signs while I'm on the highways.

RETURN A ROAD: THIS IS FOR CITY PEOPLE 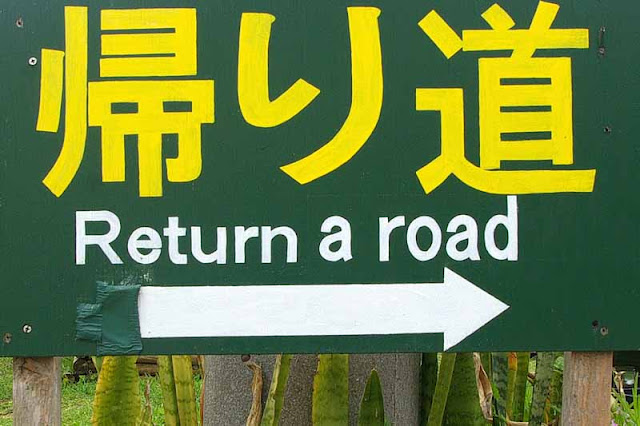 Could be they've had some sort of road rustlers up in the mountains.
You know, scoundrels who come and steal your highways in the middle of the night.
No questions asked. We'll give you amnesty. Just come clean and return a road here.
This sign is located just outside Okinawa's Quasi-National Park.
It's way up north in the mountains about as far as you can go on this island.
The sign, I think, was put there to tell city slickers how to get down off the mountain.
See, if you don't take the road that returns, living on an island, and all, you could go the wrong way.
You could wind up goin' around and around the island and keep coming back to the same place over and over again.
People who live in the country don't need silly signs telling them how to get off the mountain.
We just follow any road until we see the ocean.
Then, we turn left, or right.  It all depends on if we want to get farther or closer to home.
Shucks.   Look real close at the photo of this silly sign.
It looks like it used to have an arrow pointing both ways and somebody taped-over one end !
Maybe, next time I go up there I'll fix their sign for free.
Pull the green tape off and cover the "A" so it wouldn't be a silly sign anymore.
We could have arrows pointing both ways.
Then city people will be driving around and around the island acting like they're lost again !
MORE SILLY SIGNS IN THE DOOZIES

LOL, Saved the best for last! Got to follow this one all the way to the end and check out that last silly sign, it's a hoot!

Cathy,
That was one of my favorites, too. I didn't see the tape on that sign until after it as posted on my blog!

Doc,
We really should go back up there and see if they'll let us correct that sign!

LOL Mike, folks watching you ride the escalator up and down 10 times must've wondered what the heck you're up to ! Throw that mobile with the "cheap camera" away and grab a swanky iPhone or something, which would make you clicking job easier ! Hilarious post this :-) !!! LOL !

Sumitran,
Hah, them iPhones are way too smart for me!