Photo Essay: A Fun-filled Day at the Ginoza Museum 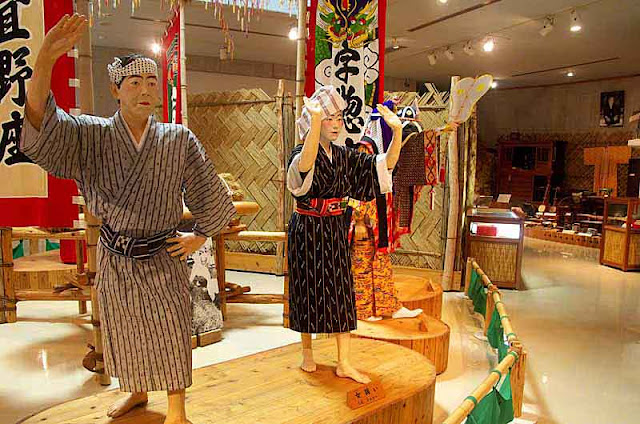 Just as soon as you walk in the door at the Ginoza Museum in Okinawa, Japan you know this isn't going to be some stuffy old place like the British Museum of Natural History. 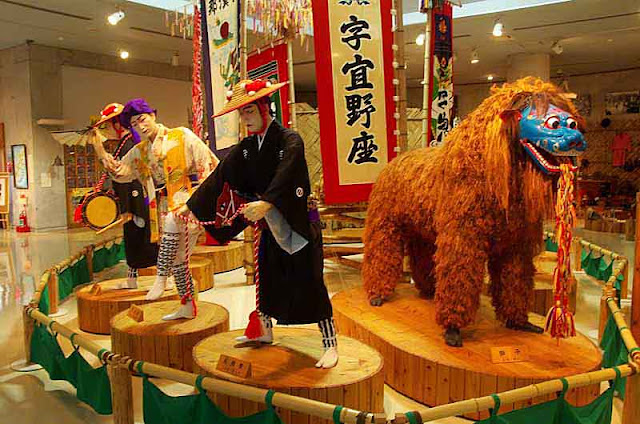 They have like, normal, everyday people statues waving at you, doing the the dance we call Eisa and a smiling, dancing lion-dog (Shishimai) is right up there on the stage with them. 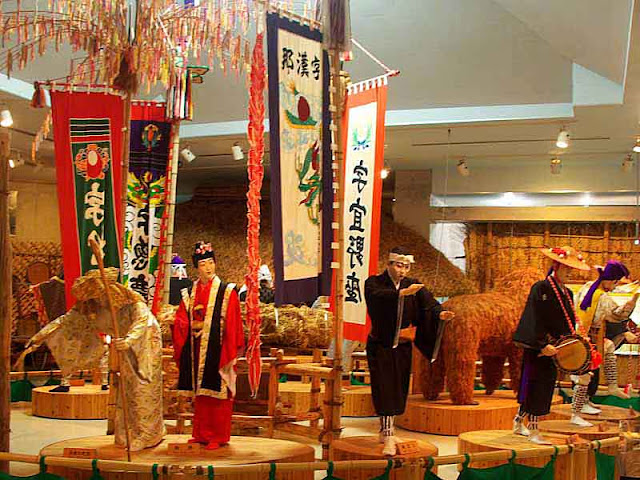 The first thing I always do is make sure it's alright to shoot my camera.  Lots of museums don't let you so, it's best to ask permission first.  When they say "OK" that's when I know I'm going to have a blast.  I'm real careful about where I set up my tripod so nobody trips over it and I like to shoot photos without any flash.
Slow and easy with whatever light is available; that's the way to have a fun-filled day of museum photography.
I shot everybody and everything. 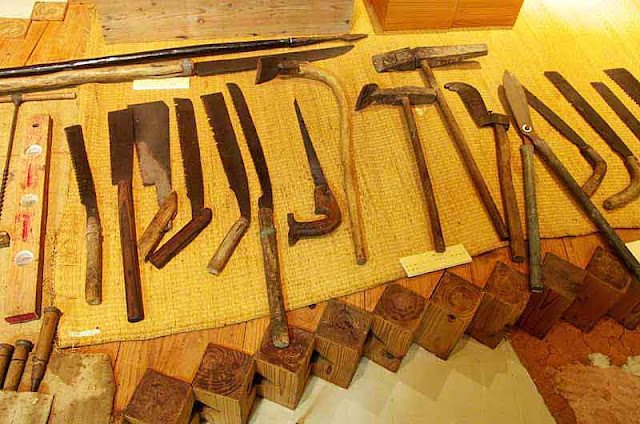 Old hand tools.  Man, what guy doesn't like them?  I bet I have some more rusty and older than these, somewhere out behind the house.  But, these guys were on display for me. 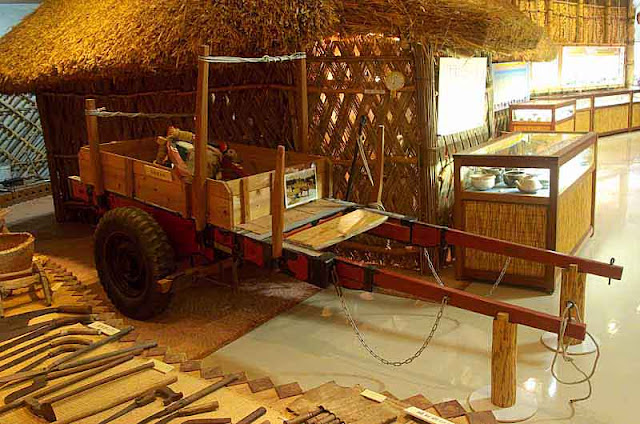 Just behind that cart I was looking at the straw-roofed house and wondering if there was a way I could get inside to have a look around.  Some museums are funny about those sort of things.

This time I figured it would be best not to ask. 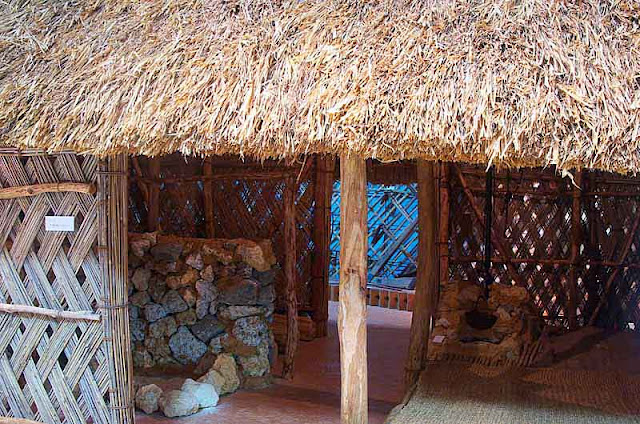 Look.  You can see right through the place and there wasn't a chain or rope across the door.

Everybody was busy doing whatever museum people do and nobody was watching me. 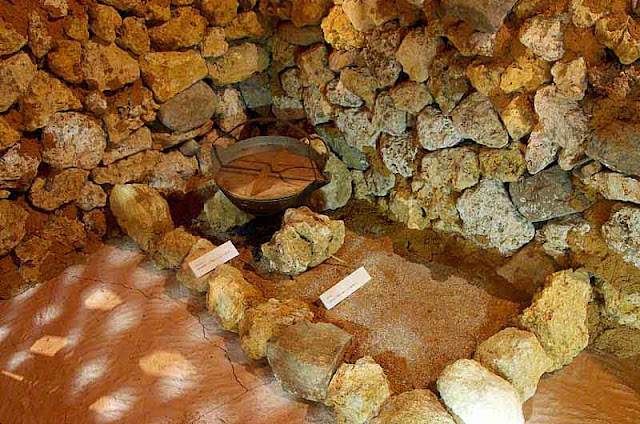 Next thing I know, there I was in the kitchen.

Those were the good old days, when you could barbecue right on the kitchen floor. 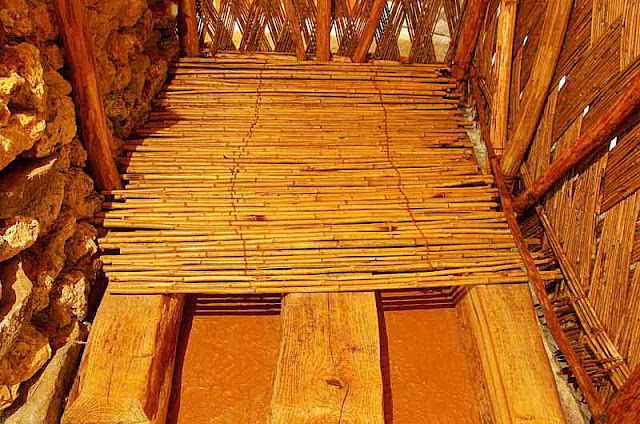 This looked like an example of how the first wooden floors were built to get folks up off the ground so they wouldn't get wet or dirty.  But, to me anyway, it looked like it might be real comfortable to lie down on.
I peeked outside to make sure the museum people kept doing whatever museum people do.
As long as they weren't watching me, that would be OK.

It felt GREAT but made a heck of a racket when all those bamboo poles started rolling around. 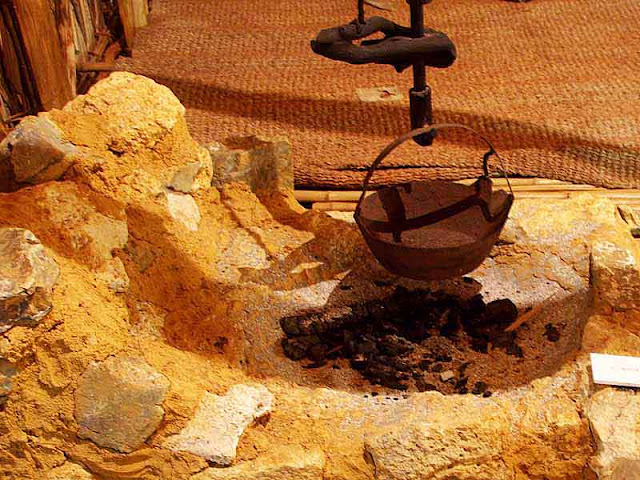 So, I jumped up quick and pretended I was taking a picture of this newer model kitchen fire thingy.
Nobody came along to yell at me so, I figured it was safe to check out some more stuff. 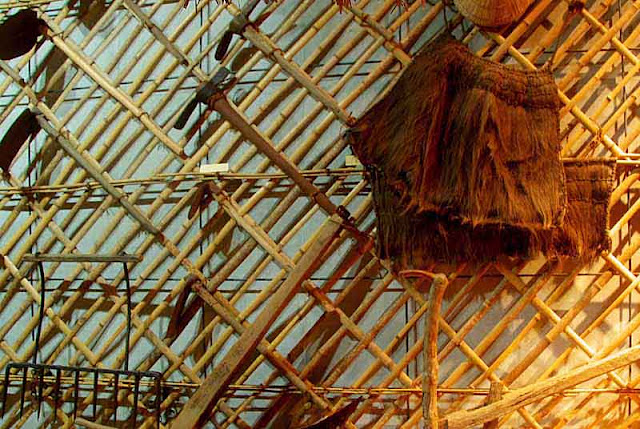 All the way out the back door of the straw-roofed house there were more tools !

Oh, and that's where some girl hung a mini skirt, or something so, I got that, too. 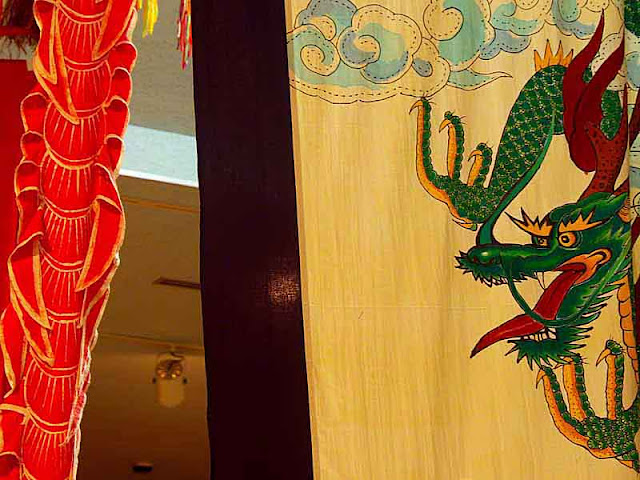 The best part of my fun-filled day at the Ginoza Museum was finding a Dragon that I had never taken a photo of before.  It's something I'll be adding to my Year of the Dragon collection.

I bet they don't have things like this in the British Museum of Natural History.  If they did, they probably wouldn't let folks like me in there to have fun with my camera !

I learn something new each time I see your photos.

Japan Australia,
Glad you visited. Are museums popular down your way?

Thanks Mike, we have a few interesting museums in Gifu. There is one right next to Gifu Koen, which is a history museum and also an insect museum.

Japan Australia,
Wow! I've never been in a bug museum. I'd enjoy that !

Excellent post! I think you've encapsulated the mission of this blog and our challenge.

Funniest. Post. Ever. I've read it twice already, because the first time tears were coming out of my eyes. I cannot BELIEVE you tried that bamboo bed. Love it!!!

Jessie,
Glad ya liked it. Man, did that bamboo feel good on the old sore back!