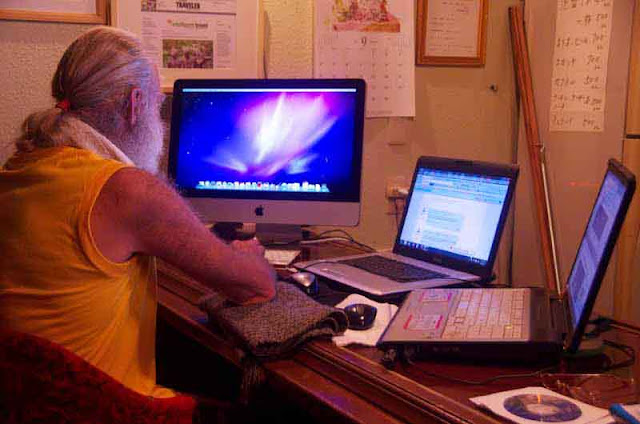 There are way too many photography programs, files and other doohickeys installed on my poor old workhorse Windows PC's for me to just throw them out in the street.

Even though I overextended myself a tad buying that Apple machine I like the way it keeps running without any interference from the Microsoft thugs.

An Apple guy, or gal, comes in every night, cleans the MAC and updates stuff while I'm sleeping.

Windows thugs are always waiting 'til I'm trying to do something important and throw stuff in my PC's to slow them down.

Then, when I decide I want to shut down and go home they say stuff like

"DO NOT TURN OFF THE POWER WE ARE INSTALLING SOMETHING".

EMPEROR BILLY GATES CAN'T TELL ME WHEN I CAN AND CAN'T GO HOME.

I DON'T WORK FOR NO DICTATORS.

Anyway, to make a long story short, I'm going to keep using the PC's I bought from the Windows thugs until they melt down because I have so much invested in software I installed on them.

In the past I have had some malware bugs, had to buy programs to gobble up worms and even did a Mad Mike's Review on REGISTRY MECHANIC.

With Registry Mechanic, Spy Doctor, and McAfee I managed to keep things running.

All of a sudden, a new year rolls around and everybody wants their annual fees.

Well, one of my PC's just locked up on me yesterday while I was trying to shut it down.

It was three hours SHUTTING DOWN and wouldn't quit.

So, I yanked out the power cord, flipped the laptop over, ripped out the battery and got it to shut off !

Have no fear.  I'm a patient sort of individual.

For the whole three hours the stupid thing wouldn't quit shutting down, I was on the MAC doing my research.

They want you to sign up, login, give your email address, try this free program so we can fix your Windows PC, install some more bugs and sell you the NEW IMPROVED VERSION OF OUR SPECIAL SUPER BUG CLEANER.

THEY WANT TO BE EMPEROR ENTREPRENEURS, TOO !

Now, the problem I linked you to was for Windows is getting stuck at "Shutting Down" screen.

But, read the whole article and you'll find FREE FIXES FOR ALL KINDS OF STUFF.

What I did was tune up both my PCs with the things I found there and they're screaming, now.


Read  Gregg's profile and email him if you'd like.

The best kind of Guru to contact is one that's free.

This Guru gets a five star Mad Mike's Review from me !