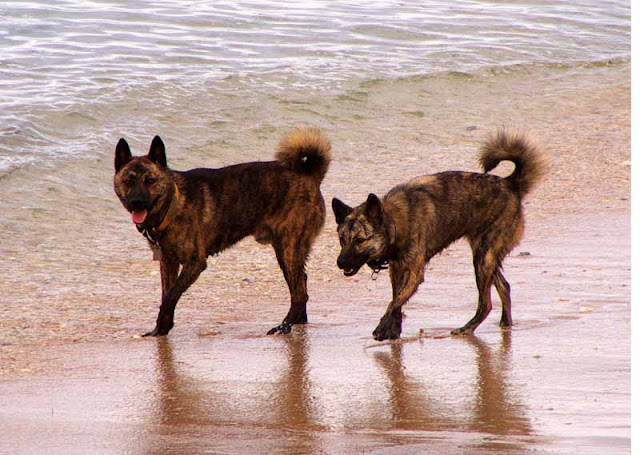 Lots of people have heard of Japan's pedigree dogs like the Akita and Shiba because they're popular up there in the mainland.  Okinawa has it's own pedigree dog, too.  It's the Ryukyu Inu.

Here are some photos of what the Okinawan's call Turra-in.  That's because they have black stripes like a tiger.  The breed was nearly wiped out during World War II and there was a lot of cross-breeding going on when foreigners brought German Shepherds, French Poodles and all kinds of non-native dogs over here.  Mostly because dogs don't need marriage licenses, I guess.

But, back in the 1980's somebody discovered a pack of these dogs up in the mountains we call Yanbaru.  Scientists grabbed a bunch of them and checked them out.  These critters were the real deal.  They didn't have any mixed blood in them and were different in genetic makeup from any other breed.  So, they became a Protected Species. There were only about 800 of them back in the 1980's but, there might be 1,000 or more on the islands these days.

There are a few other colors in the Ryukyu Inu breed.  Some don't have the tiger stripes and are red so, they call them Aka-in ( Red dog) in Okinawan dialect.

I just don't take their pictures.

When I shoot a dog and post a photo online, I want to know what it is first. 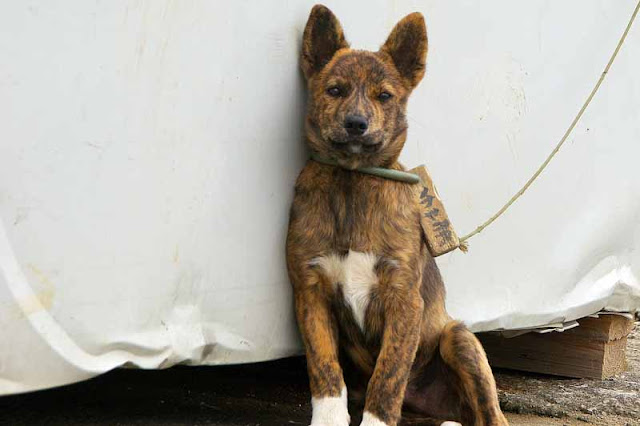 Like this guy here.  He's got the head of a Ryukyu Inu and I even talked to his master before I shot the photo.  I know a Turra-in when I see one, for sure.

This is the first time I saw one with white patches of fur.  Think maybe a Poodle got in there?

Pasikas,
Thanks for stopping by and commenting. Nice meeting you, too.
Ya got a new follower on your blog !

Can i buy a puppy to take to hawaii?

Susansato,
Tough question to answer. I'd do a Google search and see if they have any there, first. Hawaii does have a large population of immigrants from Okinawa. It wouldn't surprise me to hear the Ryukyu Inu is already on the Hawaiian islands!
Join my Facebook fan page and we'll see what we can drum up for you over there.

I have a Ryukyu inu and German Shepard mix. The story goes the mother's owner found her as a rescue dog in Okinawa. They then moved to Germany where she met the Shepard down the road. He has some features from both breeds. Whenever someone sees him for the first time they always ask, "what kind of dog is that?"

Exanimo,
Sounds like the Ryukyu Inu gets around, too!