Today's Photography Tip: When there's a sale on SD Cards is it a good deal or, no deal at all ? 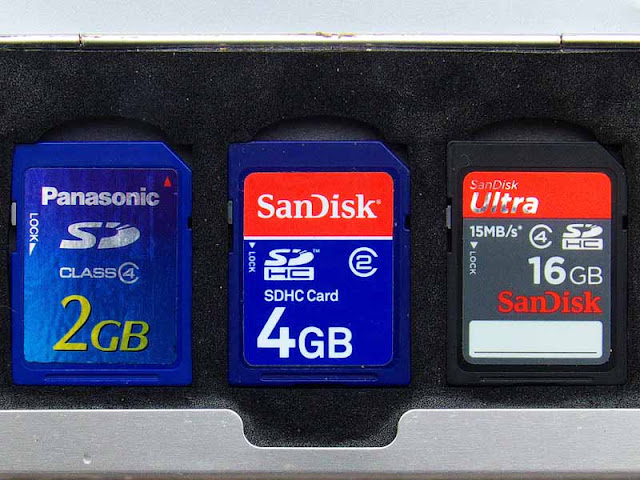 Here are some of the SD Cards I tote around with my cameras.

None of these came with any camera I ever bought.  I think the originals come equipped with enough storage space to hold less than ten of the size photos I like to shoot.

So, unless you got some package deal when you bought a new camera, you need to buy an SD Card that will handle the size and quantity of photos you plan on shooting.

Sometimes, when an SD Card is offered at a sale price, it is a good deal.  So, I'll attempt to explain in non-nerdy terms what you need to know about SD Card performance and let you decide what to buy.

SD stands for Secure Digital.  And I don't think one brand of SD Card is any more secure than another.

GB means Gigabytes.  Just figure a gigabyte is a million bytes and you won't go crazy.

Back in the days before digital you had people like me stuffing all their photos in shoe boxes.  Think of the 2GB, 4GB and 16GB as shoe sizes.  I could stuff a lot more pictures in a size 16 shoebox than I could in some little kid's size 2 shoebox.  Right?

Now, let a little two year old kid play with those shoeboxes full of photos and dump them out all over the floor.  How much time you have on your hands and how much patience you have getting everything organized and back into the shoeboxes will determine what kind of deal you want on SD Cards.

The speed that an SD Card reads and writes, or transfers digital information, is what you want to know.

The digital camera's computer captures an image. The SD Card reads and writes the information, or transfers the photo from the computer to the card.  When you download the photos to a computer reading and writing, digital-style is going on again.

This is where all SD Cards are not created equal. You want to know the Transfer Speed or Rate.

Look for the Class Number in a big "C" on the card or the packaging it comes in.

The faster they transfer Megabytes, the more SD Cards will cost you, generally speaking.

The type of shooting you do would determine what kind of card is best for you.

If I was working in studio or landscape photography, I wouldn't be too concerned with a card's speed.

Shooting wildlife and much of the time doing rapid fire in Burst Mode, I need some speed.

People who like to shoot video with their digital cameras need higher speed SD Cards.

Something you'll want to be aware of is the writing speed your camera.  It wouldn't make any sense for you to buy SD Cards rated as Class 10 if the camera only has a writing speed of Four Megabytes per second.  Check your manual or manufacturer's specifications.

There are often bargains available so, know your camera and when you see SD Cards on sale ask yourself, "Deal or No Deal"?

For more information check these sources:

Thank You Mike. Love the way you explain the different sizes as "shoe boxes" I did not know about the "C" rating or even about the different speeds of the disk to what my camera could read. I've put this in my Diigo Bookmarks file "Photography, Photos & Manipulation." Thanks again.

Kathleen,
Glad to be of some service. I hope you share this with friends.
It took me awhile to commit to memory which "C" ratings in want when I'm out shopping and see a deal !