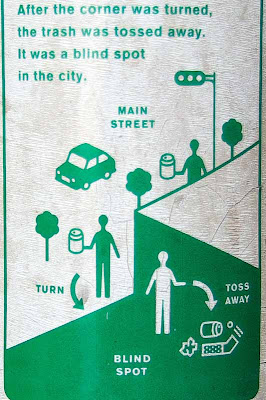 First, I just realized, the world forgot to end, yesterday.
The doom and gloom prophets blew it, again.  Hah !

Today's silly sign I found in a remote location but, don't want to tell you where in Okinawa, Japan I found it.

These signs really were intended for city people, I think.

Look how big their beer cans are. They must be rich folks if they can afford to throw those things away.

Just walk downtown with an open alcohol container and on Main Street they have an arrow telling you to turn so you can throw the cans in a blind spot. They toss them away like they never heard of the word recycle.

Country folks don't do stuff like that. Did you know, you can build a house with beer cans, if you put your mind to it ?


Once I built a dog house and a mailbox from the same kind of cans.  Whenever a new mailman or newspaper delivery lady got assigned to my neck of the woods they didn't have any trouble finding me because everything was covered with Georgia Coffee cans, the Original Version. They'd paste a label, over the address, saying,"Georgia Coffee House" on everything so the new delivery person could find me easy.  All they had to do then, was look for my fancy decorations.
I was like redneck celebrity !

When I was young, I'd go there to look for girls.  That's what lots of country boys do, ya know.

Once, this pretty girl in the city was dancing with a fireman's pole and wearing just her underwear.
She knew I was concerned, probably from the look on my face.

She pulled some money from somewhere down there and said, "Here Sunnyboy, go buy a hamburger".

So, I did because I figured she must be hungry.

But, when I got back with her hamburger, she was gone.  Well, I'm no dummy. I ate the burger.

To make a long story short, some city folks ain't that smart, if you know what I mean.

That's why the government posts silly signs showing them blind spots for their beer cans.

My friend has one of these city-people's signs on his country store and I snapped this photo of it to show you but, I think he may have just borrowed it from one of the big towns to impress visitors.

We don't want anybody snooping around, like, G-men so, I promised not to reveal the location.

Maybe we'll save up all our beer cans and someday, start up our own Silly Sign Business.

If the government ever decides to quit wasting paper, they could buy metallic signs from us.

They could rivet them to stuff and they'd last forever,  I bet !

Posted by RyukyuMike at 7:41 AM

Funny sign and I do like these little insights into your past! BTW, it looks like you're getting close to the half million mark -- special plans?

Cathy,
Shucks. I hope my mom and elder sister don't start reading this blog. I could get spanked!
Special plans? I really haven't come up with anything, yet and this blog thing is so unpredictable, you never know what it'll do next.
We should get a buncha people over on that Facebook thing and talk about it. I don't know how to use the blasted thing. It's supposed to be all the rage, these days.
I should pay somebody a coupla hundred bucks and let them run a contest for me. That way, I could spend more time with my cameras and dogs!