Photo Essay: Why Is It Called The Valley Of Gangala ? 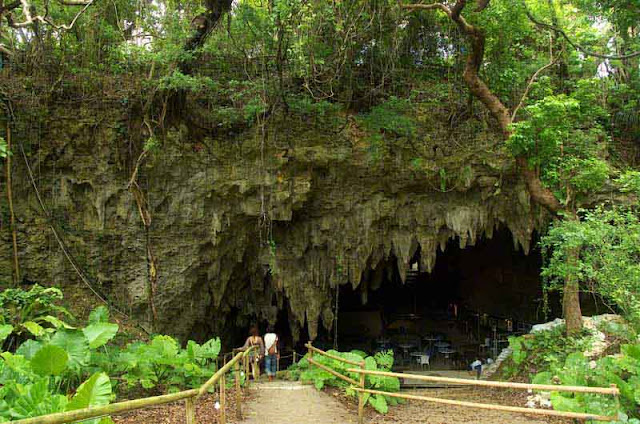 Let me warn readers in advance you may experience mild shock. 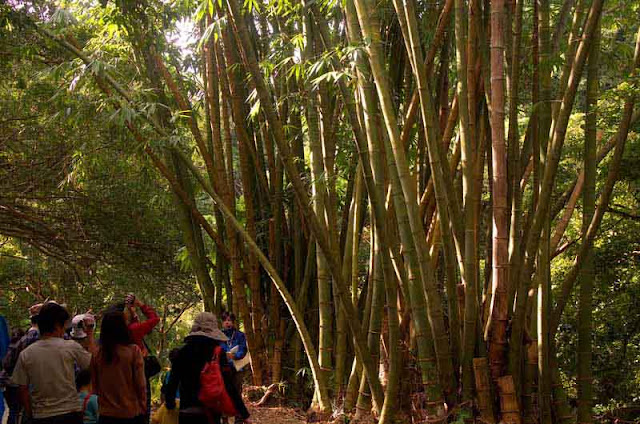 The Valley of Gangala is within walking distance of Gyokusendo Cave. 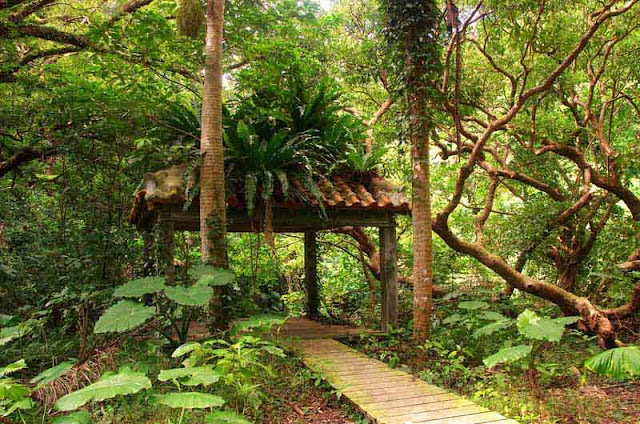 Yesterday was the first time I paid for a guided tour through the place. 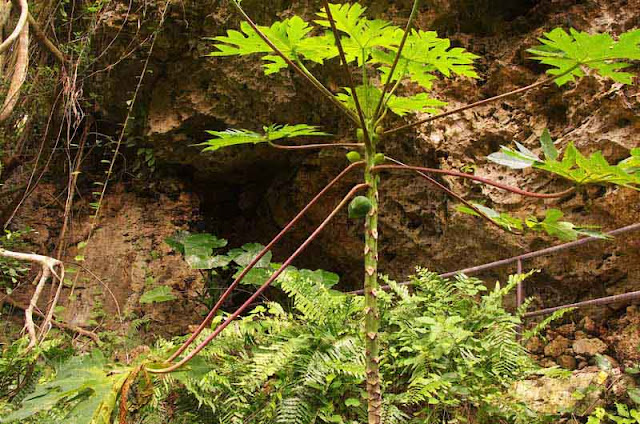 It was sort of an educational experience combined with a hike down a nature trail. 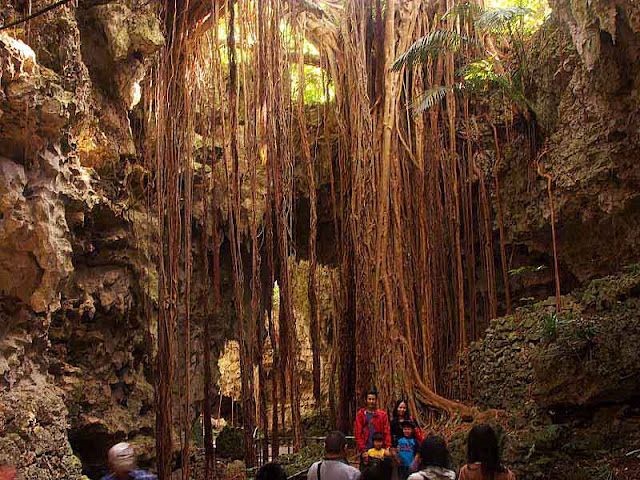 The tour stops at several places to allow visitors a chance to take photos. 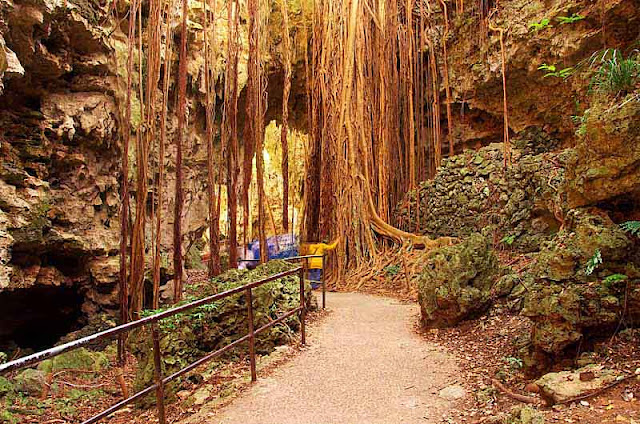 Sometimes you are outdoors in the sun. 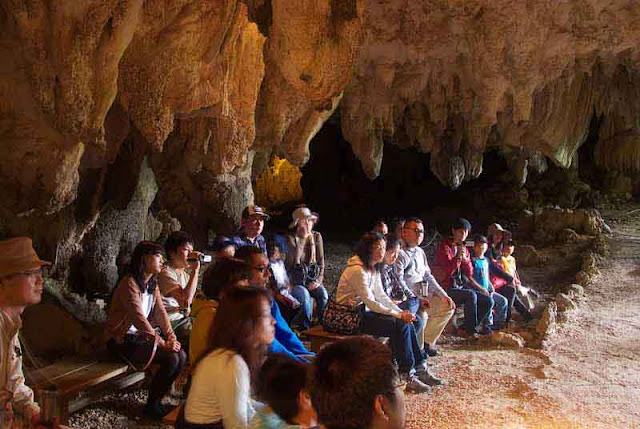 And sometimes you wind up in caves.

In this photo the guide is telling everyone about some of the pre-historic bones they have discovered in the Gangala Valley caves.

There seems to be some confusion as to where the word "gangala" originated.

Some people say it came from an orchid or a species of butterfly.

The pamphlet, a guide gave us, says that "gangala" is the sound you hear if you throw a stone in one of the caves. 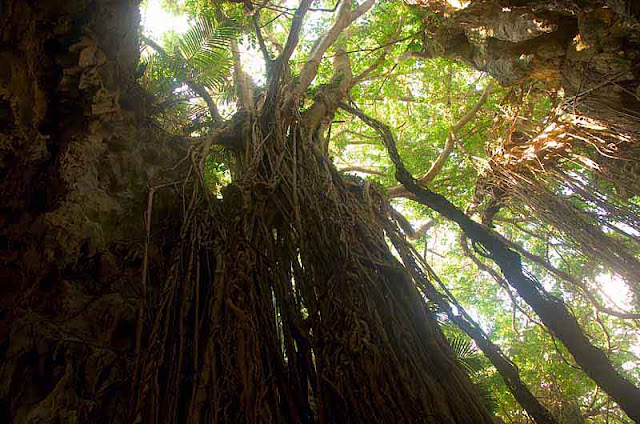 It makes you wonder who's telling the truth.

Why would anyone want to go throwing rocks in a place this beautiful ? 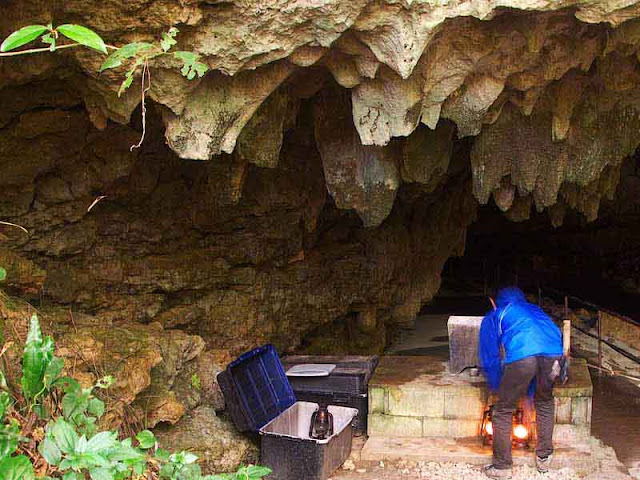 The staff members who take you on the tour teach you everything about the history of the place.

And they don't want anybody to get lost or hurt while on the tour.

That's my guide in the photo above.  He lights up a bunch of kerosene lanterns and passes them out just before we go into the darkest part of the Gangala Valley.

IF YOU HAVE A WEAK HEART, CHILDREN WATCHING YOUR COMPUTER, OR YOUR RELIGION HAS BANNED LOOKING AT STUFF MADE BY MOTHER NATURE STOP RIGHT HERE AND DON'T LOOK AT THE NEXT PHOTO ! 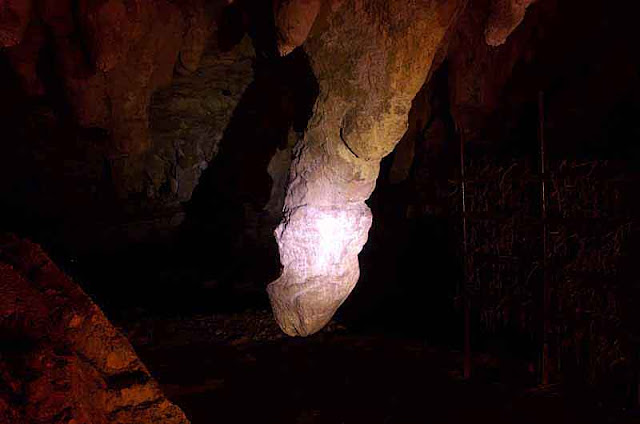 My ears don't work very well these days so, I'm not sure what the guide told everybody.

He must have said something about this being a pet rock, I think.

Everybody walked over to it and was touching it.  Not me.

Why they call this place the Valley of Gangala beats me.

They should consider changing the name of the place.

Call it The Valley of KingKongala !

Might need a Japanese Language Sensei's advice on this but, this could be one of them phonetic changes that takes place in the Japanese language, depending on how you use the word or where it appears in the sentence. I think in certain contexts, in particular how it relates to that so called (Pet Rock), "Danglia" might be the correct pronunciation!

Doc,
There's no way I'd argue with a wordsmith such as you. Let's see if we can go down there and convince them!

An interesting place, Mike. Looks like an enchanted forest those first few shots.

Sophie,
Yup, I have to get back in there someday when we have nice clear, blue skies and do that place up properly with my camera.
The guide remembers me well. That's from the other two times I tried to weasel my way in, without paying !

Terrific. I've heard of the Valley, but never visited. Now I really want to, having seen your pix.

Will wait for your PhD research on the name.

Nancie,
It may take a few more afternoons to get the kind of photos I really want but, one of these days I'll getterdun.

Waltmanokinawa,
Not a good idea; waiting for my PhD research. I'll be providing some further links in the future, though.Standby...

Hihihih, this post made me smile because my sister and her husband recently spent a good 5 minutes taking photos of a protrusion on a tree which looked like...well...you get the idea

What a fabulous series, Mike... and that last one sure is strange!

Love the photos and the last one seems a perfect climax! I am still chuckling.

Thanks for the warning, Mike, so that I was prepared for the shock! :) Gangala Valley and the caves are very cool -- love the pics.

Denise,
Bein' the shy guy I am, I hesitated to post that last photo. But, it could be the biggest attraction in the place!

Andrew,
Strange, isn't what I'd call the last one. It's humongous. Like, longer than a stretch limo!

Jackie,
LOL One of the photos I didn't post was where someone walked through the scene with a lantern. Made the thing look like it was spitting fire!

Cathy,
Thanks. Whenever I shoot something like this site, I figure it's best to be down to earth when it's presented.

Hahahaha, The Valley of KingKongala is the perfect name for it! Nature does have a lovely sense of humor. Thanks for sharing. Best for 2012!

InsideJourneys,
Thanks and may you have a Happy, Prosperous New Year, too!

This looks like a wonderful place to visit. It looks very mystical. Beautiful pictures! Thanks for giving me a chuckle this afternoon. Maybe one of these days you can post the pictures with people touching the pet rock =) Happy New Year!

Muza-chan and Mary,
Happy New Years to you, too!

You have such an imagination! What's wrong with the last photo of the rock formation? Hmmmm :)

Sherry,
My bust. I should have posted some photos with people in them petting the rock, larger than a stretch limo !

Thanks for your information!

Anonymous,
You are welcome!