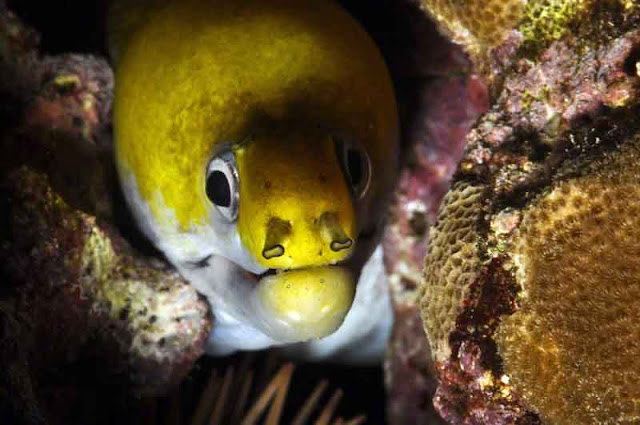 Moray Eels may be found hiding in rocks and coral reefs throughout most of the tropics and there about 200 different species ranging in size from 4.5 inches (11.5cm) all the way up to 9.8 feet (3 meters) of the Giant Moray.

This character, photographed by Shawn Miller, was at a depth of 15 feet shortly after 7PM on Dec 14, 2001.
He took the shot using a Nikon D90 with an Ikelite housing and strobe light.

Check out this photo and all of Shawn's photorgaphy at

Moray Eels get a bad rap because the film industry likes to portray them as viscious man eating animals.  The truth is they are really timid and would rather hide from you than chew your arms and legs off.

They are carnivorous, eating mostly other fish, crustaceans and mollusks but, if you go poking around in their house, they might decide to bite you.

They really have poor eyesite and find their food by sense of smell.

To attract tourists some geniouses set up operations where people could hand feed Moray Eels in different locations around the world.  Well, some people feeding the eels happened to loose their fingers after they ran out of fish and Moray Eel feeding had to be banned.

DON'T GO FOOLIN' AROUND WITH MORAY EELS IF

YOU HAVE STINKY FINGERS !

WOW the Moray eel shares an uncanny resemblance with my mother in law Mike.

These guys are so scary! We saw them all the time when I was learning to scuba dive in Honduras.

Stephanie-The Travel Chica,
It's nice to know, though, they really don't want to bite you.