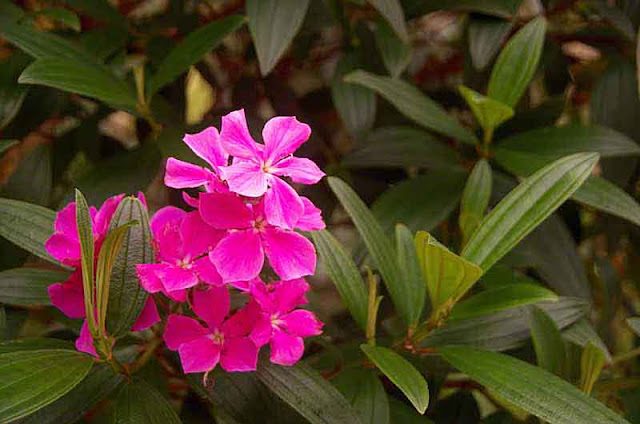 Here is a new flower, to me, anyway.

At a museum up north in Okinawa, Japan on a cold and windy February day is where I found this.  See, I get tired of hanging around inside museums trying to make photos under the harsh indoor lighting. So, I step outside a lot.  That gives me a chance to see what's worth shooting outdoors, get some fresh air and a l'il bit of nicotine in my body.  So, that's what I do a lot.

The museum photos, I'll get around to developing and posting later.  There may even be some great shots.  There was this sweetheart of a gal at the place.  She turned off lights for me when I asked.  You don't find many museums like that these days.

Well, this gal showed me this tree thing with pink flowers growing on it and she told me they are called "Nobotan".

The research I did online didn't help much but, I came to the conclusion they are some kind of Melastoma.

People call them invasive.  And, they call them weeds.


But, this sweetheart of a gal was real proud of the pretty pink flowers and they don't seem like weeds to me.

One of the names Wikipedia had listed was Forest Starr.

Not sure if that's a person or a flower name.  They're asking for help expanding everybody's knowledge about flowers, too.

What the heck.  The flowers in Okinawa aren't weeds.

That's what I'm gonna do.

I love the colors!

Muza-chan,
Can you believe anybody would call this a weed?

A weed to some - a thing of beauty to others. Love your description Mike. Interesting how I am running across a flower theme in the Travel Thursday photos today. I guess we all need some colour in our life.

What intense colors. Really beautiful! Can't believe they gave it such a weird name. Forest Star is much better :)

Hi Mike, second time trying to leave a comment. Your security is getting tighter and tighter :)

Lovely shot, and I would never call this a weed!

HikeBikeTravel, Sabrina, Man and LadyE,
Thank y'all and sorry about any inconvenience commenting; things just got a little out of hand with spam.

The definition of "weed" is a plant growing where someone would prefer it did not. One person's "weed" as another person's "flower."

Dick,
That's what I tought, too. I bet the folks who call these, invasive weeds, just planted them once because they looked pretty. Then, got lazy and let them run wild !

Some people call dandelions weeds too and I think there couldn't be a more entertaining plant. I like the name Forest Star better. Melastoma sounds very medical. :)

People call them weeds?? It's an outrage! It's the same with our state flower, the California Poppy -- they're gorgeous to me, but others think they're too prolific.

This flower is way too pretty to be classified as a weed!

Lovely little flower. I guess they would be weeds because they are non native?

Strux and aay,
Thanks. The flower actually is native to Okinawa. I think someone from Hawaii maybe, sneaked some in over there and the things went wild.

Becca,
The gal who showed me them was mighty proud of, what some people call weeds, too!