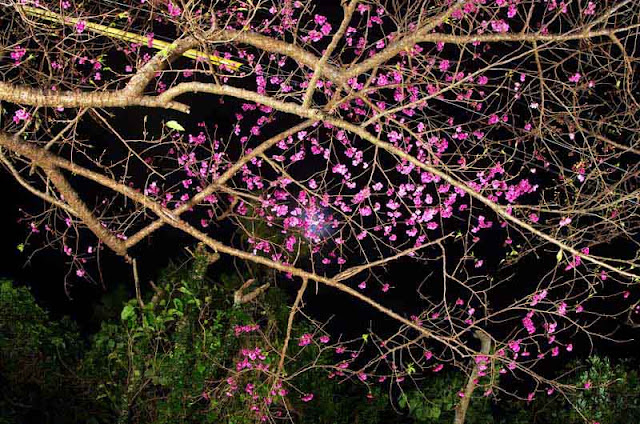 Sakura (桜) for those who don't already know, are Cherry Blossoms.

And, January-February is when they bloom all over the island of Okinawa, Japan. 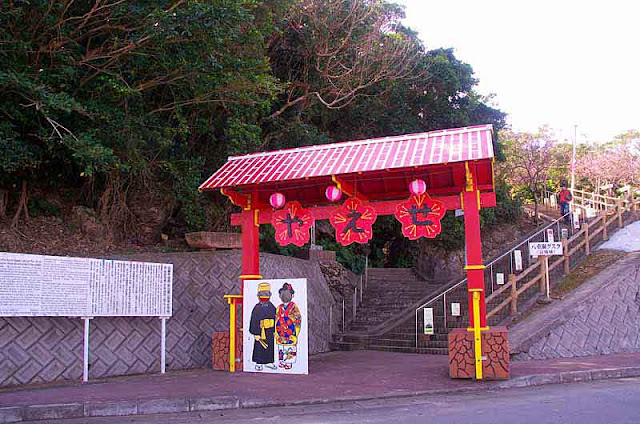 Yesterday, I wasn't planning on chasing Sakura (桜) in the daytime.

But, I was down in the town named Yaese when I discovered a Sakura Festival that I had just missed.  So, I climbed the stairs to the park it was held in and had a look around. 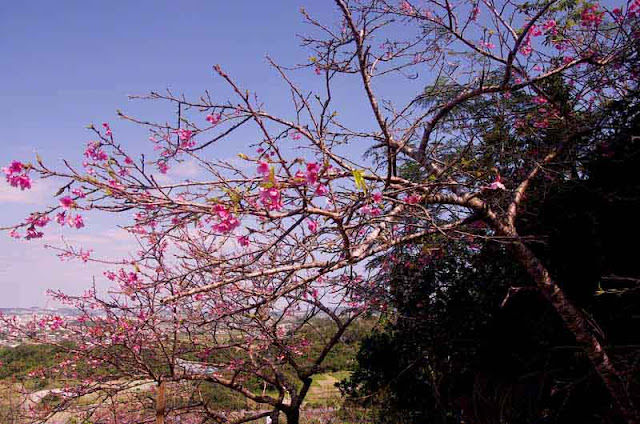 Now, I'm no flower expert, or anything like that but, I think these cherry blossoms are just getting started. 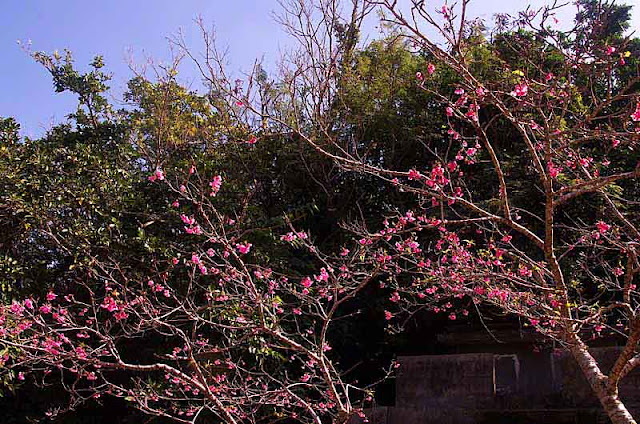 It sure would be nice if they could extend the Sakura Festivals and keep them going as long as these pink flowers keep popping out all over the island. 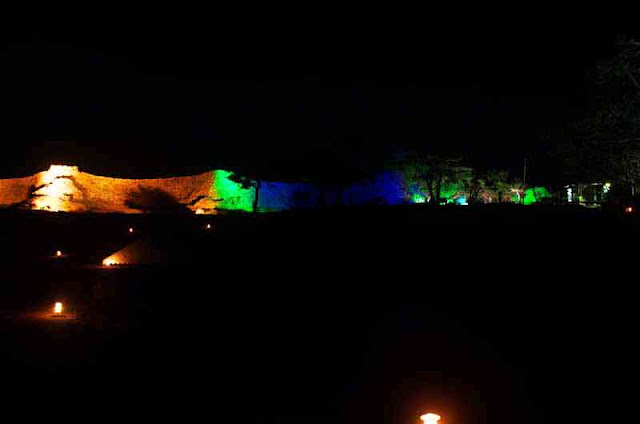 The Sakura chase, for me, continued into the night.  This was the first time I had ever seen UNESCO World Heritage Site, Nakajin Castle, lit up at night. 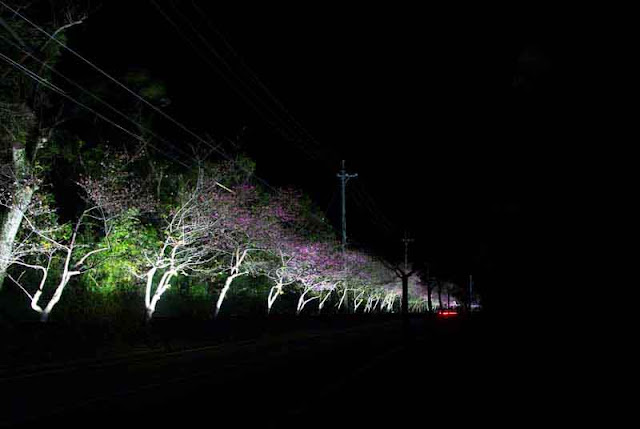 It was after 9PM when I got there and the Castle was closed but, that didn't stop me from shooting the cherry trees lit up along the highway. 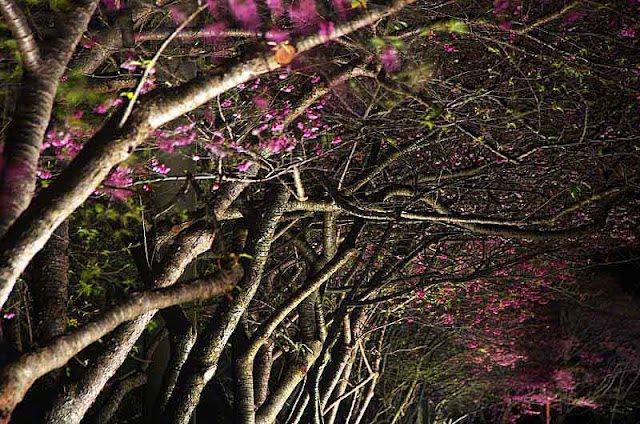 If I wind up going back up there tonight,  I think I might wear a white jacket.

People driving down the hill must be staring at the flowers, or the lights are blinding them.

It's easy to get run over when you set up a camera and tripod in the middle of the street at night. 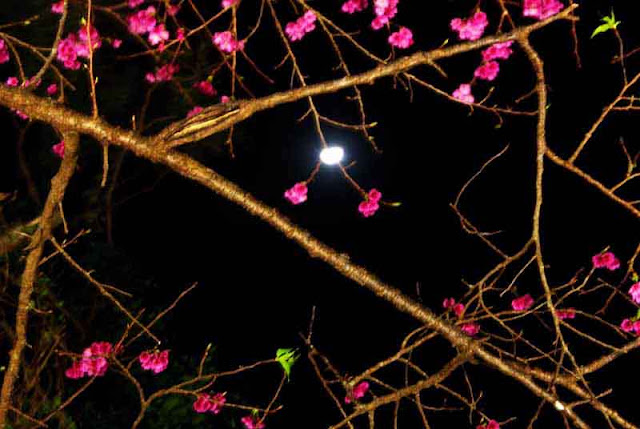 There wasn't a full moon out but, I figured I'd practice with what they had and go back when the real deal happens, someday.
Like, how many people do you know who have a full moon photo framed with cherry blossoms ? 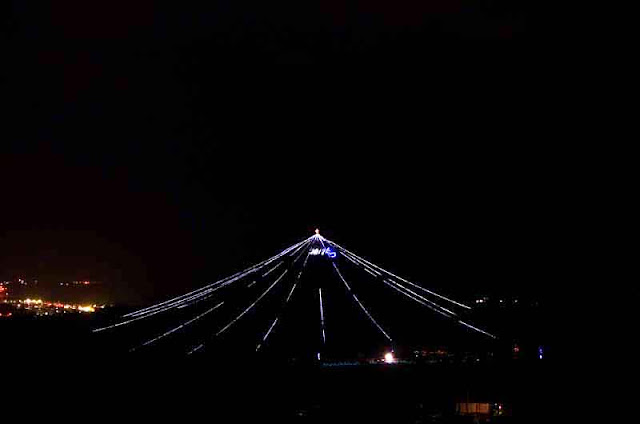 Going from Nakajin Castle to Mt. Yaedake this 2012 Year of the Dragon scene caught my eye.

It could be some Chinese people live over on that hill, or something, and they are still celebrating the Lunar New Year.  Beats me.  I only got 3 shots and the lights went out. 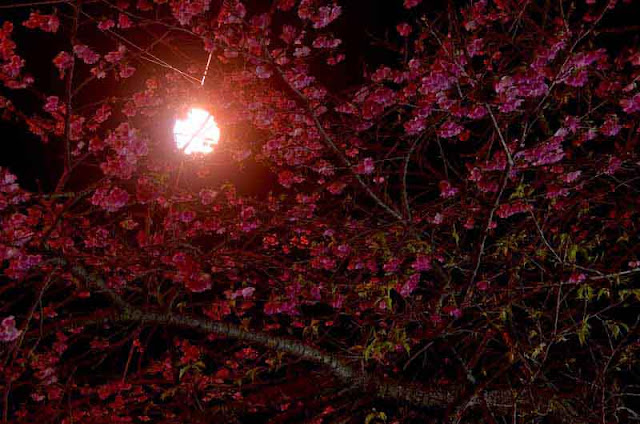 Mt. Yaedake was pretty well deserted when I got there after ten.  The wind was picking up and it started getting colder.  So, I only shot a few Sakura (桜) and..... 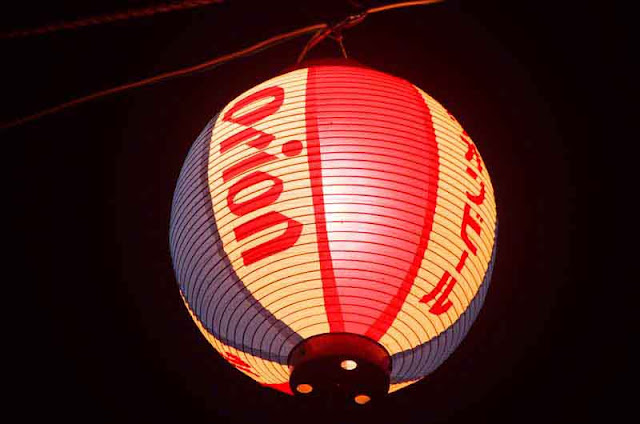 .....this illumination from my favorite beer company.

Then I quit chasing Sakura for the day.  Dropped my camera gear off at the office.
And had a few Orion Beers.

Don't you think it would give a boost to the travel and tourism industries,  if they extended all the festivals during Cherry Blossom Season ?

Heck, I'd be out there chasing Sakura (桜) all over Okinawa, day and night !