Travel Photos: It's No Bull. This Bull Didn't Want To Fight

Sometimes this Travel Photo Thursday thing sneaks up on me and catches me off guard,

Like, today.  I had no idea what kind of photos to dig up for everybody to see.

So, I decided to look through the files and see what I was doing back in February 2009.

Here you go.  I was shooting bullfights.  Only, this bull didn't want to fight. 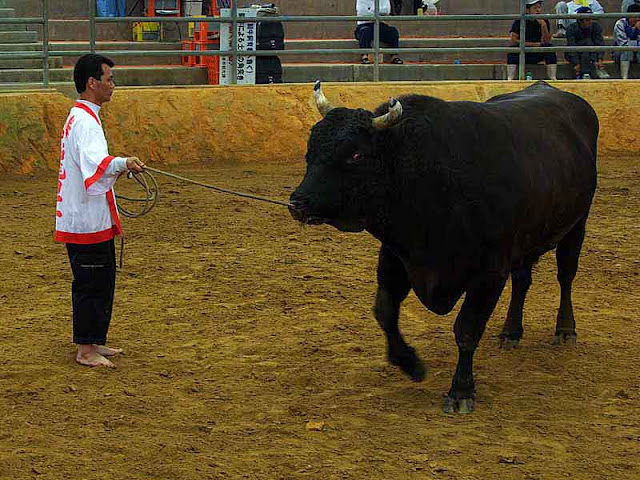 The bull is a little bit nervous because he's new at this sort of thing.


The handler isn't.  Look.  He didn't even wear his flip flops. 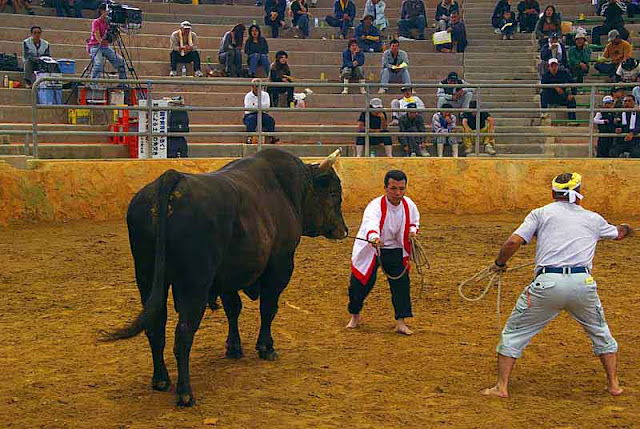 The black bull saw his competition being led into the ring.

If you've never seen an apprehensive bullseye before, you're looking at one now. 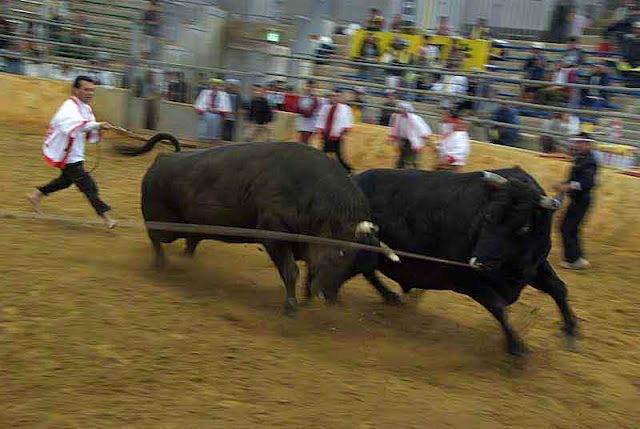 All you gotta do, if you are a bull in an Okinawan bullfight and don't really want to participate

is run out of the ring.

Being an animal lover, Bull fights pull me in opposite directions. I respect the traditions of bull fighting but I don't really like them nowadays. Great photos though!

Jade,
Trust me. I spent months with the fighting bulls in Okinawa, documenting the sport. These animals are like household pets to their owners. It should be called bull wrestling. That would more accurately describe what takes place.

Nice set of shots Mike. I went to a bull fighting festival here in Korea a couple of years ago. Like the Japanese bull fighting, no blood shed. I enjoyed listening to the crowd more than watching the bulls; go figure!

I'm with Jade - even though I'm sure it looks much worse than it is. Never actually been to a bull fight, so thanks for sharing these pics. As usual, I am living through others on these Travel Photo Thursdays :)

Bull wrestling sounds better than fighting. Love the shots - especially the first one of the reticent bull.

LadyE,
Much different from the Spanish bullfights so many folks complain about, I really think this sort of bullfighting is practiced around the globe, just not advertised as much.
And, I enjoyed watching the crowd's reactions, when I had time, as well.
With the c amera, I'm so busyfocusing on the bulls' eyes, I don't see much of the bullfight !

Sabrina and HikeBikeTravel,
Myself,an animal lover, as well, wouldn't publish, or even take, photos of the event if I thought it was some cruel bloodsport.
Someday, I may do an article on the care and feeding of these big, one ton babies!

Never heard of a reluctant bull in a bull fight. Cool pics, Mike.

Lisa @ Gone with the Family said...

I had no idea that bullfighting took place in Japan so I've learned something today. I feel a bit bad for the passive bull that just wants out of the ring though!

Lisa,
This type bullfight is probably practiced in more places around the world than the matador and sword stuff.