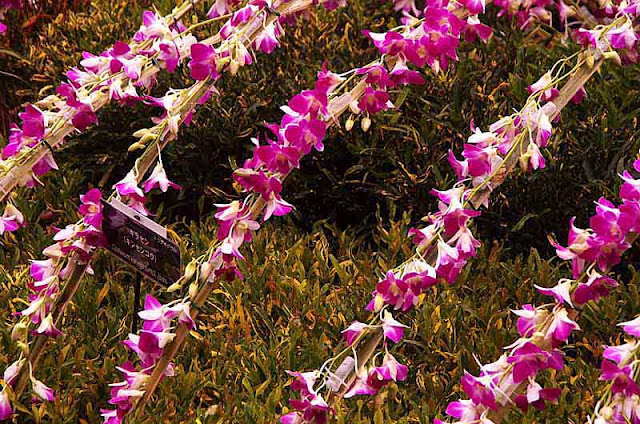 Here it is ten days later and I just finished developing all the flower photos from the 2012 Okinawa International Orchid (蘭) Show. 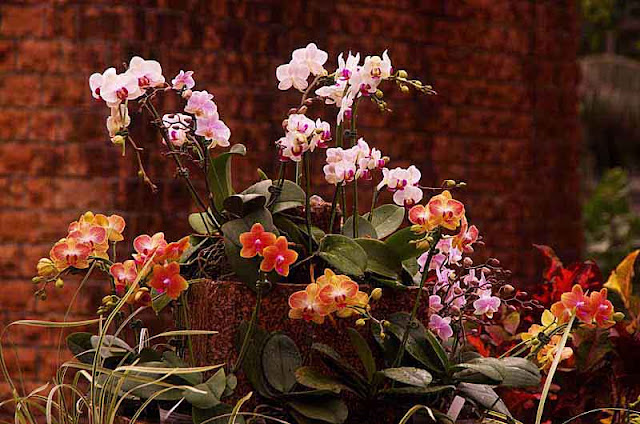 Ten more, never seen before, orchid photos that I'm posting on the blog because I said I would.

These photos are in the sequence I shot them as I was going through the place.  Normally,  you'd put your best shot first in the series to attract visitors.  But, I'm tired of looking at flowers right now so, I'll just throw them on here and let you tell me which photo you think is the best.  Hah ! 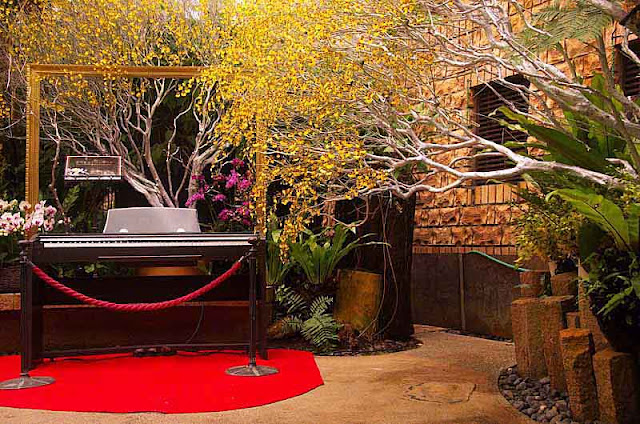 It was hard to believe, they had a piano in the place.  I figured out why that red rope was there, too.

When this gal that worked there saw me sneaking around, they sent a staff person to tail me wherever I went the rest of the day.

All I was gonna do was take off my flip flops and stand on top of the thing to compose a shot like nobody else would get.

What'd they think I was, some sort of animal ?

Anyway, I guess you aren't supposed to play the piano, or stand on top of it, either. 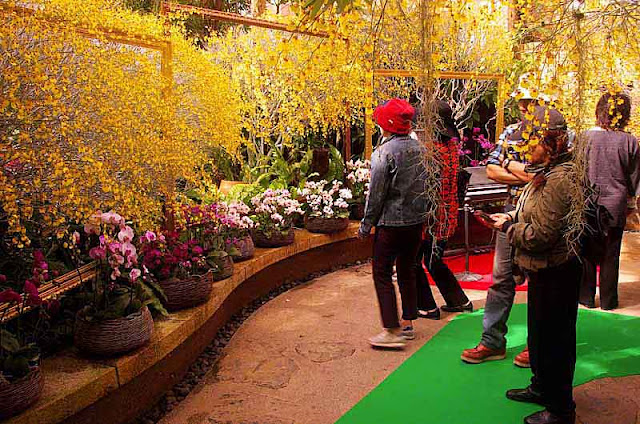 Just to prove I'm a regular guy, I let some people appear in my photos. 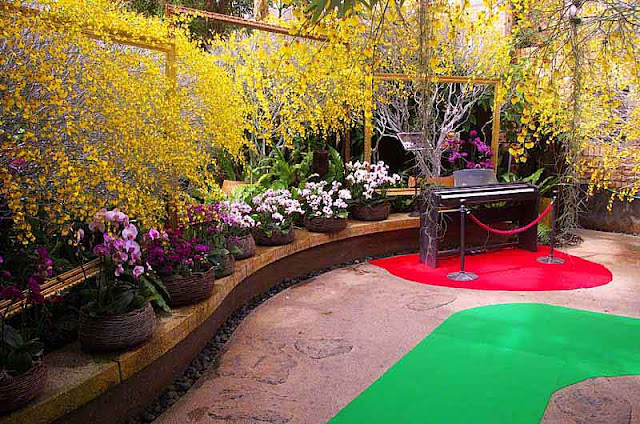 Then, when they got out of the scene, I quit biting my tongue and shot the photos they way I wanted to. Do you like peope in your pictures ? 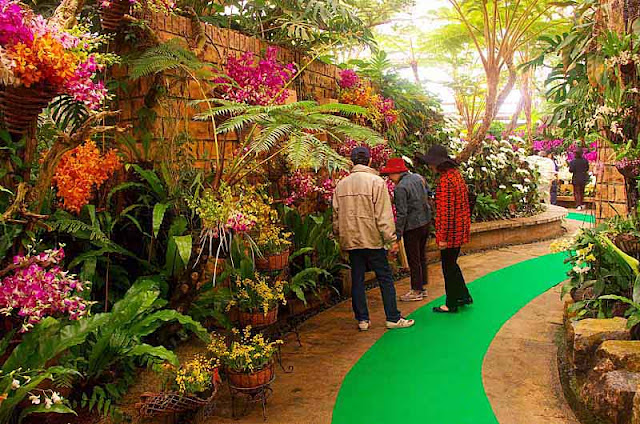 Here you go, another flowers and people photo. 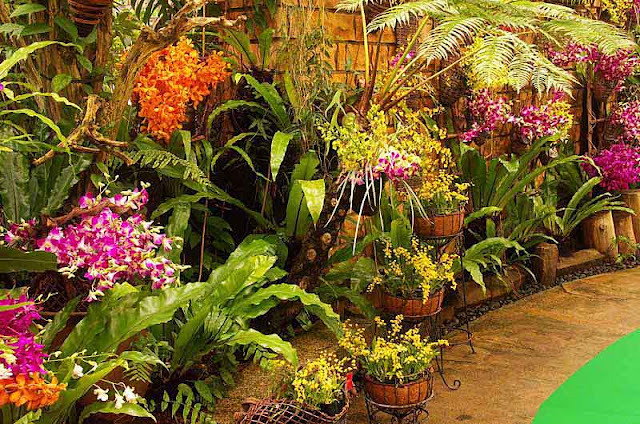 The lighting inside these buildings is a bit challenging but, it sure beats being outdoors on a cold and windy February day. 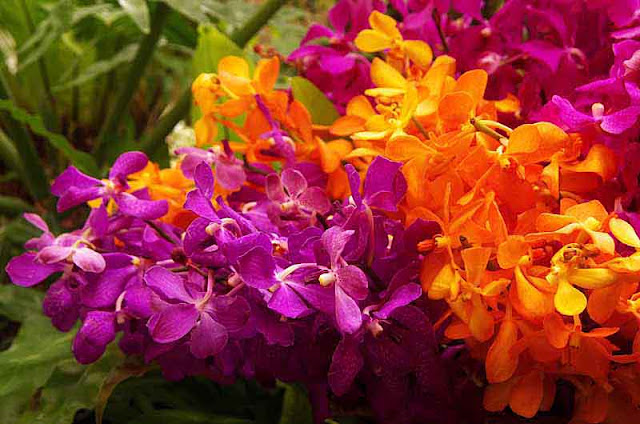 Just when I thought no one was looking, I managed to climb up on something for this shot.

But, I got caught and apologized.  And, put my flip flops back on again. 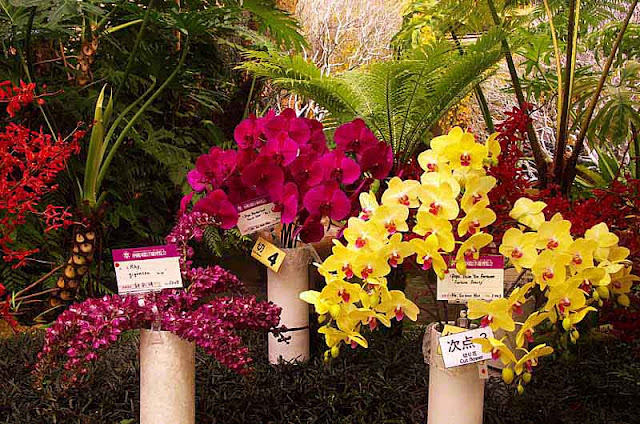 The rest of the day, I stayed on the ground. 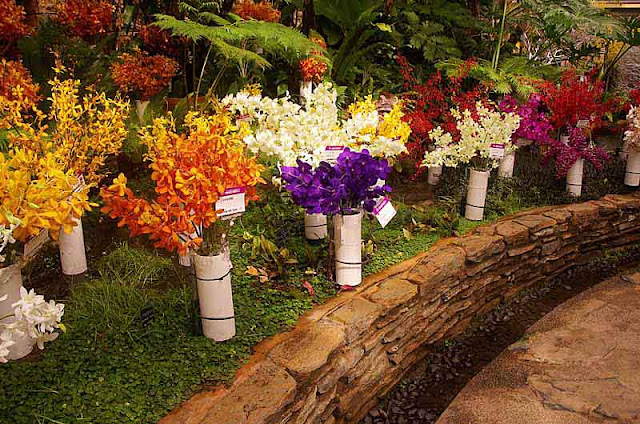 I'll let that gal pick out her favorite photo and print one for her.

Who knows ?  Maybe she'll let me stand on the piano, next year !


ORCHID LOVERS A PHOTO ESSAY FOR YOU !

All I can say is WOW! Gorgeous orchids... gorgeous shots.

Sounds to me like you're a bad ass at heart Mike - but the good kind of bad ass. I love the humour that comes across in your posts.
And the orange and pink - very striking combo - is my fave of the bunch.
Guess we won't be seeing flowers for awhile on your posts.

They look great, Mike and such amazing colours!

Wow! Definitely no shortage of flowers....

Dick, Cathy,HikeBikeTravel and Japan-Australia,
Thanks, to all. The weather over here just took a turn for the colder. Maybe, I'll sneak back up there and do some more indoor shooting this week.

aay,
Oh, there's plenty more up there to be photographed. In fact, I may go next time, when it isn't so busy and take my time shooting the non-contestant orchids.

You are funny!! I don't like people in my photos either - unless they are my kids :)

Becca,
Oh, sometimes people are OK when you're trying to show perspective and for travel magazines, of course but, I was busting my fanny trying to show off, just the orchids.

Second time trying to leave a comment...sigh. Why do I have such trouble commenting on your blog?

Anyway, lovely flowers. Orchids are among my favorites and you have captured them beautifully :)

LadyE,
Sorry for any difficulty commenting. Your same comment came through twice.
Glad you were persistent. I'll always enjoy your compliments.

Wow, so beautiful! Love orchids and it's a pleasure to see so many in one place :)