Photo of the Week: It Really Is A Small World After All ! 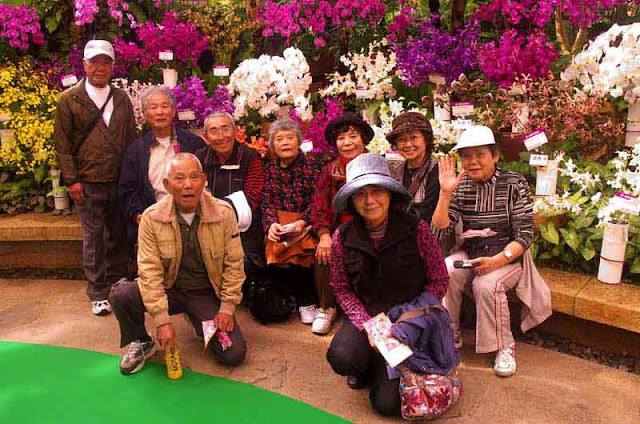 Crazy things happen to me all the time.
Like yesterday,  I was taking photos at the International Orchid Show.
This guy come up and taps me on the shoulder and says, "Mikesan."
Well, I looked at him and said, " Sashiburi.".
Don't worry.  I wasn't cussin'.  That's short for "Long time-no see."
Talk about a small world.  Sometime, last century,  I was the best man at his sister's wedding.
That was in California, USA.
When he found out I was a cameraman, everyone in his group wanted pictures.
Well, some gal handed me one of those throw-away film cameras and I told her I forgot how to operate them.  So,  I took a few photos with the newfangled thing for them.
Folks, over here, of a certain age, don't have internet and email.  That's the easiest way for me to send them printable photo files.  Email is kinda scary, ya know and computers even worse.
Dang,  I wish I could remember that gal's name from the wedding thing, I did.
Maybe, she has a computer back in California and will recognize her brother.
That way,  I could get an address and mail a photo to the guy and his friends.
IT'S A SMALL WORLD AFTER ALL !

Posted by RyukyuMike at 4:02 AM

Email ThisBlogThis!Share to TwitterShare to FacebookShare to Pinterest
Labels: Best Man, California, Humor, Photo of the Week, Small World After All, Wedding