Four of the Guinness World Records Held in Okinawa, Japan 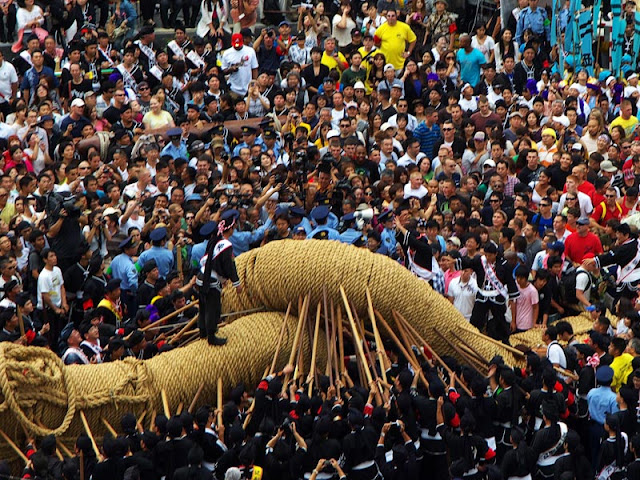 Guinness World Records come and go because people around the globe are
CONSTANTLY TRYING TO BEAT THEM.
Take this Naha Tsunahiki (Tug O War) for example.
The thing weighs over 40 tons and is made out of all natural fibers.  Somebody in China might make a longer rope, get more people to tug on it, or even make one that's heavier.
But, I bet they can't afford to weave the required amount of rice straw, used in this rope, together to break the world record.  People would be starving to death.
Ain't that the stuff they use to make Kellogg's ® Rice Krispies ® ? 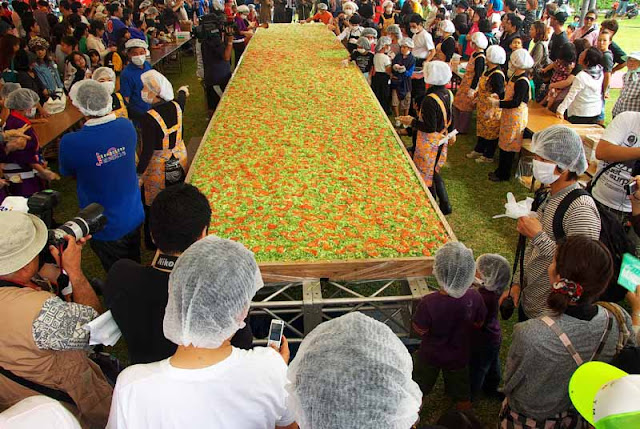 The Guinness World Record for the largest Taco, Rice, Cheese on the planet happens to be held by my hometown, Kin Cho Kin in Okinawa, Japan.
This worries me.  You just know somebody, somewhere is plotting to take the title away from us.
Probably some chefs in Mexico or Argentina are conspiring at this moment.
Don't hold your breath waiting. Because 746 kg is a lot of food to cook, all in one place.

NOW HERE'S ONE THAT REALLY HAS ME WORRIED ! 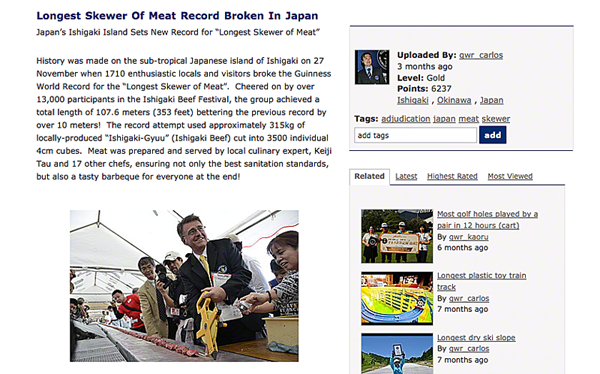 In November of 2011 the island of Ishigaki Okinawa, Japan made the
GUINNESS WORLD RECORD for the biggest kebab on Planet Earth !
They put together over 100 meters of Ishigaki beef on a metal rod and grilled it.
Guaranteed, folks in Turkey are going to try and break that record.
Don't they consider themselves the Kebab Capital of the World ?

The fourth and final Guinness World Record in Okinawa, Japan is this one held by an American. 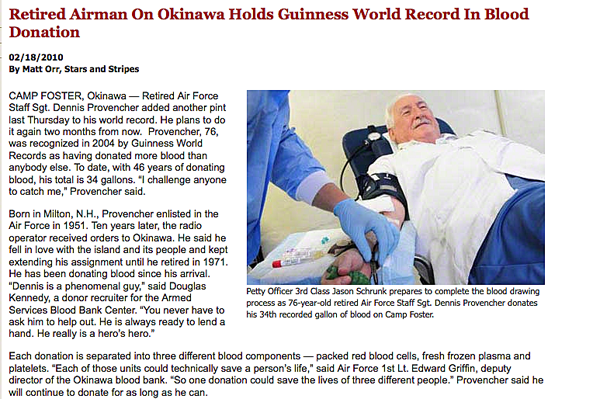 Dennis Provencher, retired from the US Air Force, holds the
Guinness World Record for Blood Donation.
He has donated over 34 gallons (128+ liters) of his blood to help others in his lifetime.
This is the only Guinness World Record in Okinawa, Japan that I don't worry about.
If someone is plotting to take this record away, go ahead, I dare ya.
Here's what Dennis says: "I challenge anyone to catch me."
And to Dennis, I have to say:
Buddy, they just don't make people like you, anymore.
And, I salute you.

Mike, that’s quite an eclectic collection of world records indeed !
Bravo and well done to your kind neighbours and country mates of Kin Cho Kin in Okinawa, Japan, and thereabouts !
Trust the retired sergeant is going strong and is still saving lives. I see from the post that it’s now a couple of years old.
One suggestion for your consideration please. I think centre aligning your comments would make it a wee bit easier to read (than centre aligning it the way it is now) ! But then you’re the author and you get to decide the way it gets published !

Sumitran,
Thanks. I never know if people come here to read or just look at photos.
Maybe, once I learn how to do this stuff like a real editor, I'll give your suggestion a try !

Great shots Mike! I had no idea that Okinawa held all these records.

LadyE,
Thank you. You'd be surprised at the things you can find a Guinness. Bet there are a bunch of records over your way, too.
Once, I was even going to become a Guinness Official. But, then, I learned it wasn't owned by the beer brewing people anymore. So, I gave up on the idea!

That's quite a collection of records for one city :) Very interesting!

Enjoyed reading this post. It's pretty interesting how much time people spend trying to get into the Guinness Book of Records - with just such weird things.

Hats off to your home town.

Lisa @ Gone with the Family said...

The Guiness food records never cease to amaze me - there always seems to be a story in the news about somebody somewhere trying to break the record for some huge food item or another. Hopefully the food doesn't get wasted after the record is broken! Great post - I never would have guessed that Okinawa had such a diverse collection of Guiness records!

Can't say I've even heard of these off-beat world records, but they do seem very Japanese.

Interesting records in Okinawa. Surprised about the taco, though. Is Mexcan food common in Okinawa?

Jackie and Joel,
Glad you enjoyed!
Sabrina,
Thanks. These records aren't just one city, though. Okinawa is a whole bunch of islands stretching from the south of Japan, all the way to Taiwan.
HikeBikeTravel,
Glad to hear you enjoyed, too!
Lisa,
Not to worry. None of the food goes to waste. We eat it all !
Expat in Germany,
Not sure what "very Japanese" means but, OK !
Sophie,
You'd be awed by all the different foreign foods this culture has adopted/adapted. Once, when I was preparing to BBQ some lasagna my grandson asked me (in Japanese) if I was an Italian !

aay,
Check it out sometime. You may have some Guinness records near by your town, too.

Strux,
Fun? Well, maybe the first 3 events. Last one, would be more of a drianing experience but, the guy is a real hero!