Cool and Crazy Stuff at an Okinawan Museum (Photo Essay) 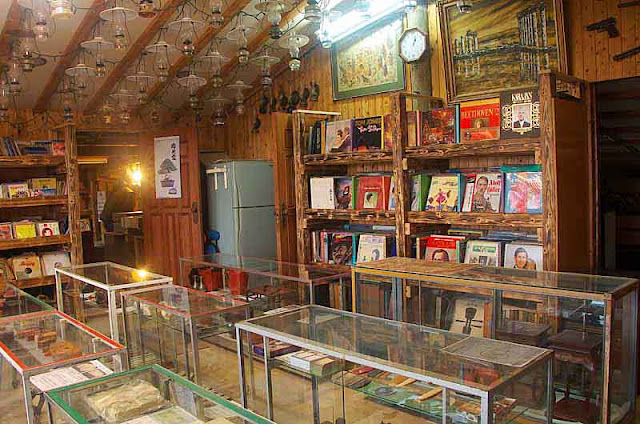 Most of the time the great outdoors is where photography takes me, not into museums.

But, when the weather isn't right and Doc Graff or the Mapitokinawa guy, I call RyukyuRu, decide indoors is the best place to be on a cold day in February, we do museums.

These photos were taken Feb 8, 2012 and I just got around to developing them because, ahem-ahum, indoor photography just isn't my priority.

Now, that I've looked at the photos, I want to go back to that museum, mostly because I realize they have some cool and crazy stuff up there. Plus, you can learn things from museums. 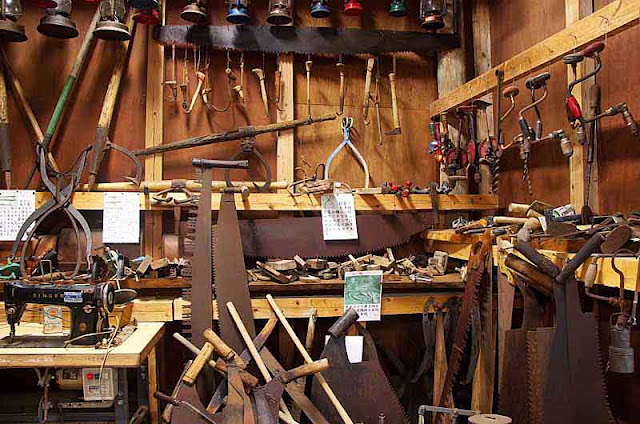 The curator of the museum (if they have such a thing) probably thinks like me.

There's plenty enough hand tools to go around so, why worry about inventories. 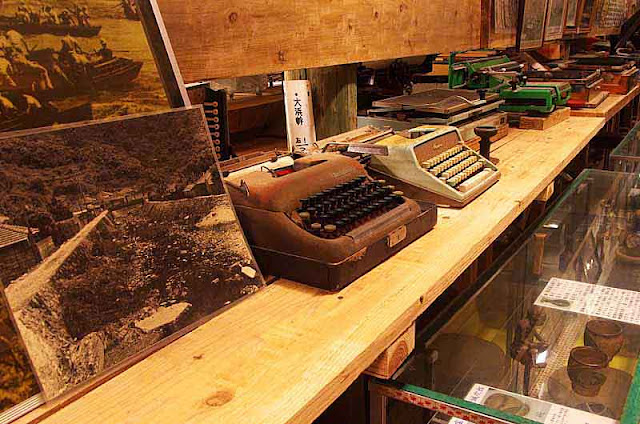 They had real cool typing machines back in the good old days.

Those babies didn't melt down or burn if you dropped some cigarette ashes on them. 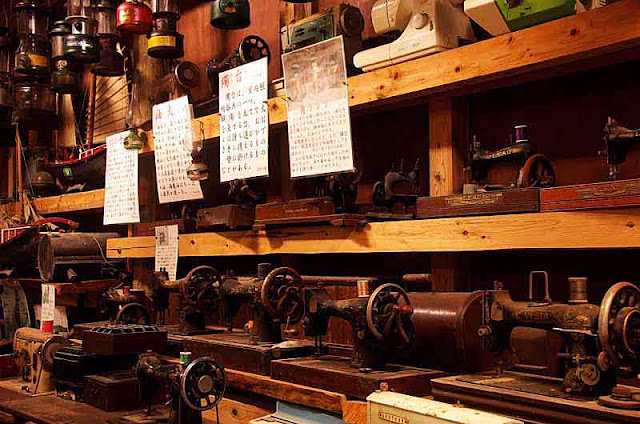 Some of these old sewing machines didn't even need electricity; they were people-powered. 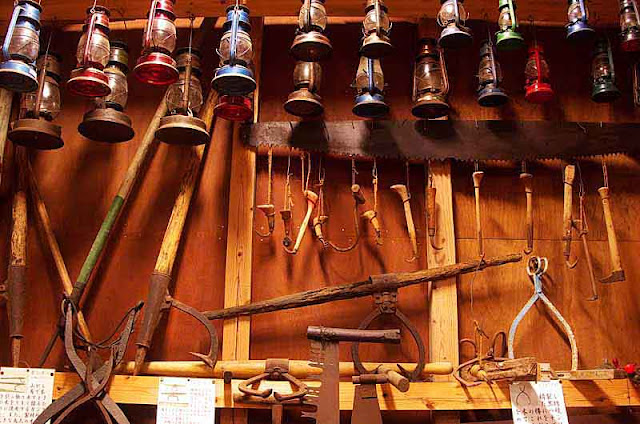 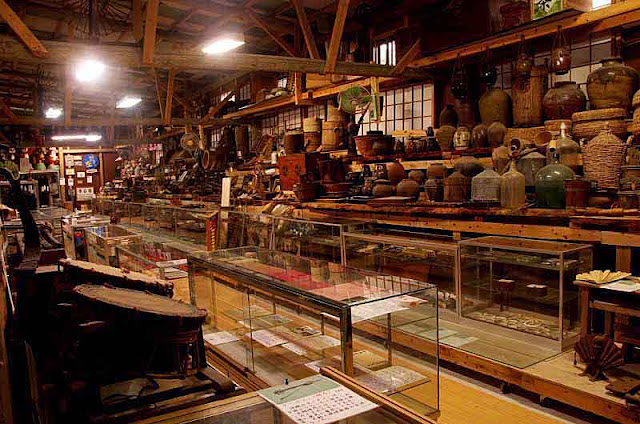 Those florescent lights are one of the things that make photographers in museums go crazy.

They probably cause problems for postal workers, too.

Somebody should look into that. Doncha think ? 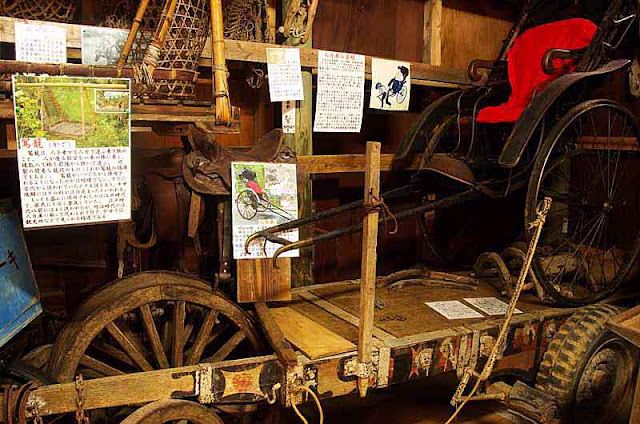 The rickshaw is one of the crazy inventions, I never understood.

Why the heck would anyone want to ride around in something with a Chinese guy pulling it ?

So, I researched.  And I found out the machine was invented in Japan. 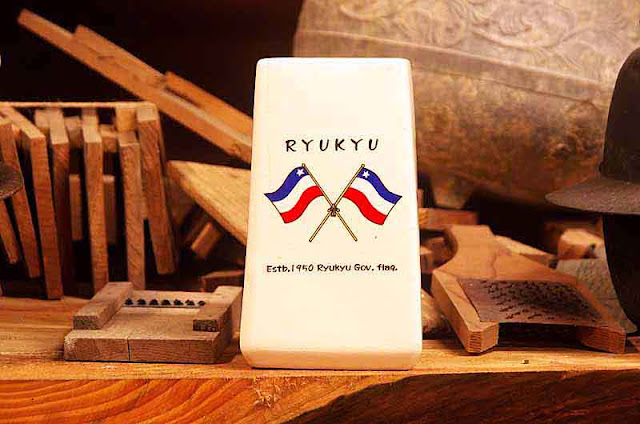 There was a Ryukyu flag, I never knew about, on some sort of pencil holder.

It wasn't clear to me at the time whether or not stuff could be moved around to better light for photography.
I figured, if I asked, they might say "No".

Got my photo and put everything back where I found it. 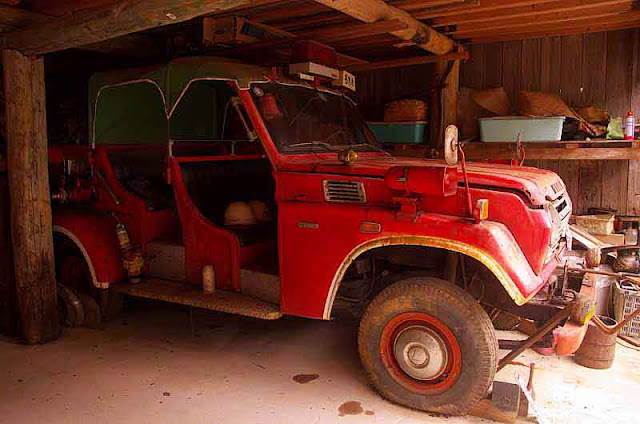 The coolest thing I found at that museum was this old rag-top Toyota Firetruck. 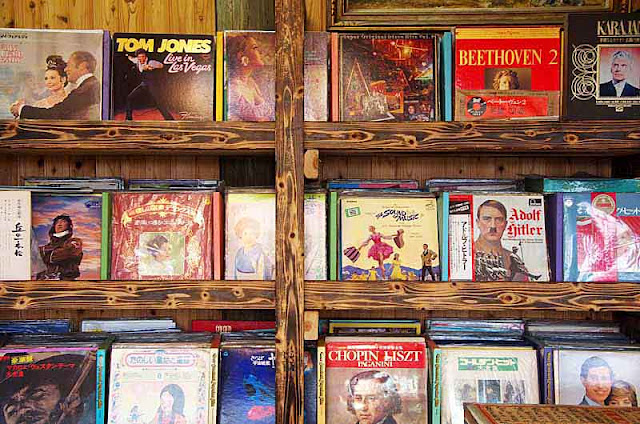 The craziest thing had to be this collection of record albums.

There are some real classics there.

What the heck is Adolf Hitler doing on an album cover ?

NOTE TO LOCALS: FOR DIRECTIONS VISIT MAP IT OKINAWA

That looks like a cool museum. Allsorts to keep you interested! I love the old typewriters and sewing machines - and the Ryukyu flag of course. ;)

Julia,
Aw, I loved the original Ryukyu flag from back in the days when this place was a Kingdom.

That Toyota Firetruck would look amazing restored and brought back to its former glory :)

Japan-Australia,
Yes Sir! I want one, too!

Will you please tell us the name of the museum or provide a google maps link?

HyperMinimalism,
We'll have to yell at that dude over on MapitOkinawa. He's the Google Maps expert on these sorts of things.
To be honest with you, I don't know the name of the place and would get lost trying to find it again. It was somewhere in the hills above Nago and difficult for the guy driving to even find. LOL And he's from that neck of the woods !