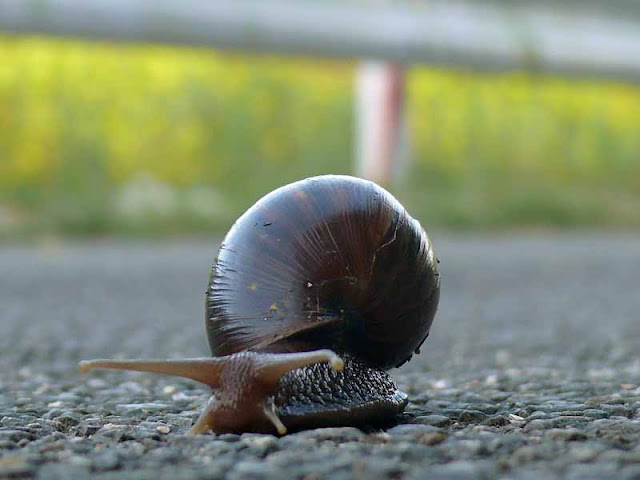 This isn't something I just made up. There's a guy somewhere in California suing a restaurant because a snail exploded and squirted sizzling hot butter in his face. A lawsuit over a hot snail exploding in your face?  Gimmie a break. I'll get to the Theraflu stuff later. I just feel like ranting about exploding snails awhile longer.

What kinda knucklehead thinks he should get money for biting into a hot snail?  Where's Judge Judy when we need her?  Is she still on TV these days?  I haven't tuned in for a few years. But, when I used to watch TV, I always thought she'd make a great President. She would tell it like it is. Once she told this gal, "You're too stupid to have babies. Don't have any more!"  Man, what an ideal Presidential Candidate she'd make. I'd vote !

Back to the snails. Could this be something, maybe the TSA should get involved in?  Possibly the snails got wind of that guy with the exploding underwear. We are all gonna suffer slow, painful, hot-buttered deaths.

But, that's not all. The guy is only suing for $7,500 due to his pain and suffering. How about the poor freakin' snail who got thrown in to boiling-hot butter, somewhere in California? Where do these people who ask for hot-buttered snails think they are, in France?

Wait !  It gets even better. This case has a precedence. It happened in upstate New York, way back in 1988. A woman got her eye burned from one of those evil, hot-buttered critters. This was way before exploding underpants ever came into vogue (That's French, ain't it ?) and she brought a lawsuit against that restaurant.

Hang-in, this gets even better.

In both cases, the sales of exploding escargo (snails) skyrocketed.   More knuckleheads want to go to the restaurants and try their luck with hot-buttered, American-style, exploding snails. I'm not kidding !

This is a story worth following. Keep up to date on it right HERE. It's all true; I double check everything.

NOW FOR THE THERAFLU PART OF THIS POST, I PRESENT YOU THIS: 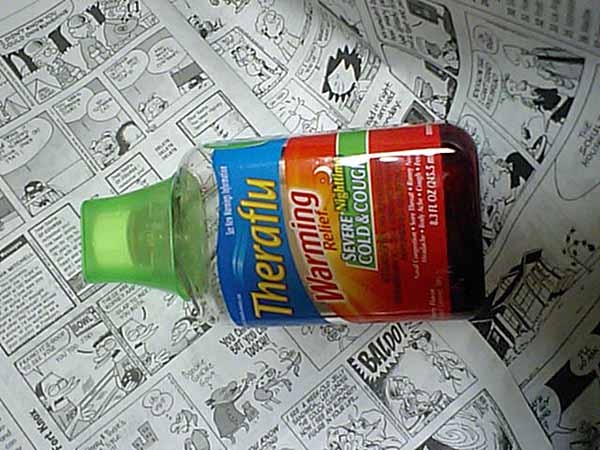 Theraflu is some real powerful stuff. I never had it before this past Sunday. Now, I have no idea what day it is and don't really care to find out. I took this photo with my cell phone camera just after reading about the exploding snails and just before gulping down my two tablespoons (or was it teaspoons?) of the stuff. Woo!

That Theraflu stuff makes you feel good. It stopped my runny nose, uncongested my congestion, made me quit coughing, numbed my headache and even made me turn the dogs loose to walk by themselves. And the best part of the deal; it's nightime medicine.

I took some for breakfast and will have two more doses before the sun even thinks about setting tonight.

My recommendation to those people in New York and California would be:
QUIT TRYING TO ACT LIKE YOU'RE IN FRANCE. QUIT EATING EXPLODING SNAILS.
QUIT FILING LAWSUITS AGAINST RESTAURANTS. DRINK THERAFLU AND CHILL-OUT !

Posted by RyukyuMike at 3:43 PM

Grog, Drowse, Groan is Springtime coming soon?
Oh, LadyE, I just noticed you up there. C'mon in and have some of this cough syrup !

You "took some for breakfast"? Did you pour some instant coffee in it before you swallowed it-haha! You are neverendingly entertaining, Mike. Thank you. And I'm glad you're feeling better. I hope it lasts :)

Sabina,
Usually I won't take anything stronger that Aspirin but, I was really run-down with this cold. Theraflu knocks me for a loop; it's scary so I'll be weaning myself off of it as quick as I can. I think it's probably stronger than Scotch. Hafta ask that guy over at Scotlandhereandnow. What's his name ryanrob?

Of course - it's mostly about the danger factor... sort of like the whole fugu attraction. And maybe after downing a mouthful of Theraflu (unfortunately not sold here in Australia) it might be even more reason to have a devil-may-care attitude when it comes to crazy and potentially life-threatening gastropods.

Wasn't that a Seinfeld episode? I think that was too-tightly-rolled crepes :)

Adelaide&Truckmount,
It's insanity but worth a chuckle or two. What ever happened to Judge Judy, I wonder?

awesome post, snails should not be eaten period the French well they are just French and we should look the other way. Now the Theraflu thing that could be interesting in a You-Tube sort away ---- very entertaining Mike :)

Greg,
Hah, you'll have to find another volunteer for the Theraflu video. I'm gettin off it as quick as I can !

Theraflu or Niquill are great before a long haul flight. You sleep like a baby :)

Myscrapbook,
Whoa, that stuff is too powerful for me. It should only be perscribed by a Doctor, I think !

Nice to see snails fighting back...they'll be strapping gelignite to their bodies soon hoping to go chasing after 70 snail virgins at top speed!

Jim,
Whoa, what an imigination! You been nippin' on a bottle of that Theraflu stuff, too? LOL!
Thanks for stopping by and leaving a comment.

You just cracked my up and I laughed all the way through your post. Now, before you sew me, take an other sip of that theraflu ;)

Fida,
Glad you enjoyed my rant. I try to stay away from those sorta things but, just can't help myself sometimes.
Nice meeting you. I looked at your site and you now have a new follower. 1st class page you have there.