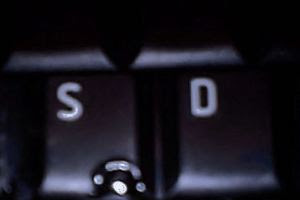 Today I want to bring up a rant from the past. It was posted on one of my other blogs and now is probably a good time to do some editing and bring it here. That's just in case someone is planning on buying a loved one, or me, a brand new computer for Christmas. It's important to know:

PLASTIC TYPING KEYS AND BURNING CIGARETTES DON'T MIX AND THIS PHOTO IS PROOF!
Original Post Dated April 6, 2010 over on my WordPress blog but, I like blogging here.

This was a brand new laptop, just last month. I'm probably still paying for it. Haven't even figured all this Window 7 stuff out yet and my "S" key is already melted!

They just don't make machines like they used to. I bet Mark Twain didn't have half the problems we do nowadays with all this junk technology. He probably had a real typewriter, one with wrought iron, metal keys; something you could leave a lit cigarette on, go get a cup of coffee and not have to worry about your whole house burning down and toxic fumes, stinkin' burning plastic and all kinda pollution coming outa the machine.

Now, I know somebody's probably going to try and tell me I should quit smoking. And I probably should but, it probably won't happen, at least not in this lifetime. If you think I'm a miserable old goat now, you should see me when I try to quit smoking.

Smoking is good for some people and I'm one of them. It drives the Doctors nuts when they give me physicals, stress tests and all those wierd examinations. One time they stuck me in some contraption that looked like a glass helicopter with a breathalyzer and a bunch of computer wires hooked up to me. The technician had to leave the door open and wave his arms while he was screaming, "Inhale hard, exhale harder, longer, more, more , more, harder, a little bit more, more, more"!  That's 'cause I don't hear well.

When I flopped outa the bubble, all sweaty from huffin' and puffin' on his silly air tube he showed me the ticker tape with the results and said I did amazingly well. I must have been 100% recovered.

He wanted to know how long ago it was since I had my last smoke.
He figured I'd quit 30 years ago, or something and the Doctor sent me in for a follow up, I guess.

When I told the guy I had my last smoke about 15 minutes ago, before I came in his office, he almost choked !

And all the stories you hear about bartenders and airline stewardesses croaking from second hand smoke, hah!

They're making it up.

I have proof.
Just go and read the Obituary Column in your newspaper. Not one pet caught cancer from secondhand smoke.
I check everyday

Have your ever heard of a dog or cat catching cancer from people smoking cigarettes around them?

Now, I try and be polite and don't smoke around non-smokers but, I won't let them kiss me, either, at least not on the lips, anyway.

The Doctors tell me I should quit because if I don't, I'll die,

I inform them that the odds are, they'll probably die someday, too.

Anyway, the laptop is fine. I put the fire out and turned it upside down to shake all the ashes outa the keyboard and everything seems to be working perfectly.

I'm wondering now if I shoulda spent the extra grand and bought a Mac. Do they have metal typing keys?

Why would I want to spend an extra $1,000 if they don't?
Plastic Typing Keys and Cigarettes Don't Mix.
I have proof !

Hahahehehehawhahaw.... I seriously love this post. It's just so ludicrously non-PC that it most probably deserves some sort of "stick-it-up-ya" internet award.

I should say that both my wife and I are ex-smokers... we gave up at finding out we were pregnant... and that's our choice. However, having said that we used to smoke happily. We enjoyed it and got totally p_____d off when people would give us those speeches.

That's not to say that ultimately we're happier as non-smokers (our wallets definitely are happier that we don't pay about 11USD per packet of 25 cigarettes that is the price in Australia these days (about 900 yen).

At the end of the day it's still your personal choice... especially in your own home and you should do what you want. If you want to quit you will (most smokers apparently try to give up something like 12 times before it sticks... coz they don't really want to).

And if you don't, then please enjoy every last inhalation for those of us that still remember the joy of smoking (and in the quiet of our own hearts, occassionally, in moments of weakness still think about it with some fondness).

PS - sorry about the keyboard. If it makes you feel better I recently spilled a glass of red on my laptop... this also has a rather deleterious effect on keyboard functioning. Damn keyboards.

AdelaideBen,
Thanks. They probably don't have any awards for this sorta thing. The laptop is fine, so far. I moved the ashtray a few inches farther away so I don't get the two confused anymore.
Now spillin drinks on a laptop, that'd be a different story. I've seen some places where they just put a sheet of Saran Wrap over the keyboard to protect it from spills.
There was this time I went to a party and these gals had Saran Wrap and...um, that's a different story, too.

Okay.........I feel sorry for your poor computer. Your lungs are your business :)

I quit smoking ten years ago, and APPARENTLY failed my recent lung test. I think the hospital is just trying to get money out of me for more tests. No more money to the Koren doctors, I'll get a second opinion in Thailand. I'm convinced that there is nothing wrong with my breathing....that my story........and I'm sticking to it :)

LadyE,
Good for you. I do remember some places in Korea though, where the air was so thick with pollution you didn't need to be a smoker to ruin your lungs. Get that second opinion and I hope you're all clear.
When I croak, sometime after my 100th birthday, I'll be donating whatever parts they want to salvage. Just hang in there and when they sift through the pile, if you see something you need, grab it and run!