Unidentified Fruit (Photos) and a Girl with Muscular Arms (Unexplainable)

Normally, I would just delete photos of this low quality to save space for the ones I consider worth keeping.
This unidentified fruit keeps popping up in my files and I've got to do something about it before it drives me nuts. Maybe, it is a nut. Who knows?
The girl with the muscular arms, she wants to know what this fruit or nut, growing on the island of Okinawa is, too. She's from here and she's never seen anything like it. 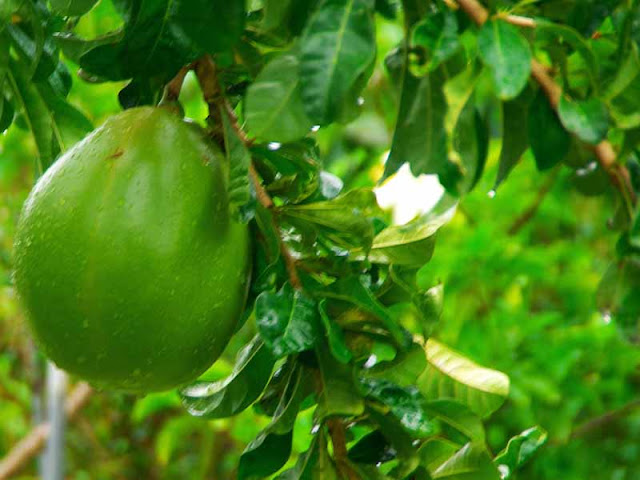 The reason we have such low quality photos is the shot was taken through an open car window. The engine was running and I had to tell the driver ( Dude I call Ryukyu Rusty ) to lean back so I could snap the shot without getting his ears or nose in the picture. It was raining, a little, and the place we were at looked like some kinda sacred site so, I wasn't getting out and setting up my tripod and all that fancy stuff I usually do.

Just in case we had to make a fast getaway, he kept the engine running.
Rusty, he's one of those good old boys from Texas. He has his machine tuned to where it sounds and acts just like one of those GMC pickup trucks with dual exhausts, quadruple carburetors, an over-sized cam and makes a low growl, vibrating and straining against the brakes while it waits to make a quick getaway.

The only thing is it's a Nissan with half a GMCs cylinders. 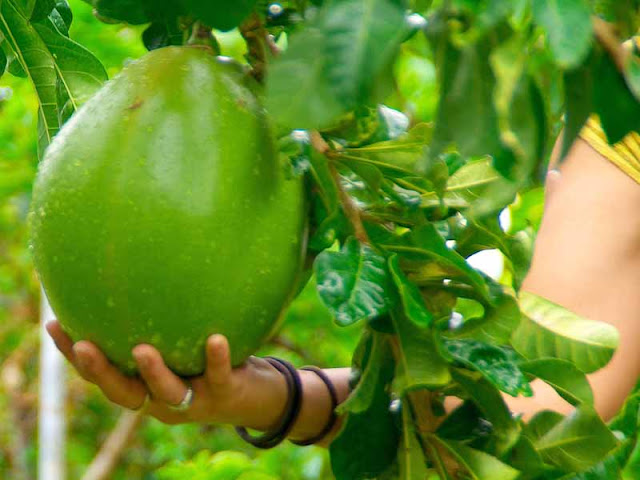 Then, I got the idea it'd be lots easier to identify an unidentified fruit, or whatever is, if we had someone to stick a hand in the picture. That would give it a sense of scale.
Well, like I said, I wasn't dragging all my camera stuff out of the car to shoot some fruit in the rain.
Rusty, he was the driver. He had to keep the engine running, just in case we had to make a fast getaway.
His fiance was sitting in the back seat. She got volunteered. That's her hand under the fruit.
It gives the picture some scale. That fruit isn't a pear. We can't figure out what it is.
The arm is hers, too. It doesn't look much different that any other arm I've seen on a young girl anywhere else in my travels. I found out about the muscular arms about a month later.
We were all sitting at the bar one Friday night and I pulled up the photos we took that day. Everyone snapped shots of the fruits with their cell phone cameras to show them around and see if we can get a name for the strange thing.
When the PRETTY GIRLS and UGLY GIRLS and the Unidentified Fruit came up, Rusty kept talking about the muscular arm in the picture.
Well, I'm still trying to figure out why he keeps picking on her about the muscular arms when just the right amount of beer kicked in for all of us to start flexing muscles and groping each other like we were working at the TSA (bicep gropes only) and now I know. This girl has arms as hard as a rock!
She can't explain why. It's not from her mother or father. She doesn't pump iron, work in the fields, practice karate and brick smashing with her bare hands. She doesn't do any exercise harder then operating the TV remote control. It's unexplainable, if even she can't explain it !
Today I spent way too much time Googling unidentified fruits and came up more confused than when I started. I have some deadlines to meet and just don't have time to research this fruit any longer. Maybe someone will see the photos and have the answer. The girl with the muscular arms, I wouldn't mess with her. They're heading back to Texas to meet Rusty's family. I know what his grandpa will say when he meets her.

"Keep that one; good breedin' stock".

That's what he'll say when he sees the photo of the unidentified fruit !
Posted by RyukyuMike at 12:02 AM

LadyE,
Wasn't plannin a contest but, come on over and arm wrestle that gal and if ya win......!

Neva,
This gets better all the time.....

This post reminds me of the song by the Bacon Brothers: "I got it bad for an arm wrestling woman..."

Crisa,
Thank you ! We were just talking about this post yesterday. Me, the Guy from Texas and The Girl with the Muscular Arms; still haven't figured out what that fruit is !