How I Became Santa, Forever 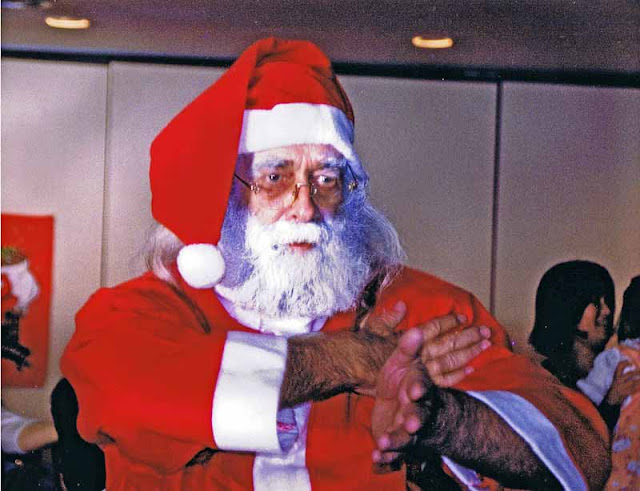 A Volunteer gig as Santa for some handicapped children made me become Santa, forever.

The Santa photo is actually me (1994-1995ish), back in the days when I had to run around a few months before Xmas trying to find White Hair Coloring. Not many folks in Japan, or anywhere else, I suppose are in the market for spray that makes them look older. It was impossible to find. I'd usually end-up using spray snowflakes or white shoe polish. Now, when I play Santa, I just go natural.


The Santa gig was a thing I volunteered for at an Okinawan school for handicapped children. They provided the uniform and said they even had the wig and beard. I figured if the kids were gonna be pulling Santa's beard to see if it was real, I'd grow a real one; grew long hair and a ponytail, too.

That first year playing Santa, I had no idea what I'd gotten myself into. I bought around $100 worth of candy and dumped it in a white pillowcase. The PTA folks who asked me to be Santa had me show up 4 hours before their Xmas party was to start. They didn't want the children to see me arrive. They'd never had a foreign Santa before.

They had me go backstage in the school auditorium. They had me hide in a closet so none of the kids who came along with parents doing decorating and party preparations would discover me. And they kept bringing me ice-cold beers. I like my beer and I like it cold. I'm really not wild about being stuffed in a closet for a four hour party, though. But there wasn't anything else to do, so, I drank the damn beer.

The cue for Santa to come out on stage was the kids and parents would shout "Santasan". They'd do it and the MC would tell them it wasn't loud enough and have them yell "Santasan" again louder and louder until Santa could hear them. That was kinda cool, since I'm deaf in one ear and don't hear so well outa the other one.

Anyway, I came out onstage doing the Ho Ho Ho Merry Christmas bit with a sack of candy slung over my shoulder. There must have been 300 kids and parents sitting around the edges of what looked like a basketball court. I jumped off the stage and started to go pass candies out. Then, I remembered the boots. Old black, steel-toed boots from the engineer days. This is Japan; ya take yer shoes off. I said "Uh oh" and turned around, ran back to sit on the edge of the stage and unlace the boots. Everyone laughed and I felt better.

Next, I went around the auditorium passing out candies and wishing everyone a Merry Christmas. I'd reach in my sack and grab whatever. Some kids may have gotten 6 candies, others 3 or 4; no way I could take time to count. I was just worried I wouldn't have enough to go around. I figured I'd pace myself. Try and ration the stuff so there'd be a little extra left to give the PTA folks, who worked so hard, something to take home afterwards.

When I finished my rounds, I went back and sat in a chair in front of the stage. I passed the little candy I had left to one of the teachers. There was a program for events like, games, skits, Santa passing out gifts provided by the PTA, even dancing to a Japanese Macerana Xmas CD with Santa, if you can believe that !

But, like most events, programmed in Okinawa, nothing seems to go according to plans. Things just happen when they happen. So, I'm sitting there wishing I had about four more bladders and getting my first look at the crowd where I'm not trying to focus through sweat-steamed, rimless eyeglasses. The children are maybe a mixture of mentally and physically handicapped. They start milling around the gym, some still munching candy but, they're a little afraid of this foreign Santa; none of them come near me. Good. All I want to do is get their gifts passed out, take a piss and go home. I did my volunteer Santa gig. Keep smiling. Hang-in. Never do Santa again. As long as I live.

Then, one little girl, maybe five years old, autistic, started limping towards Santa. I figured, since it had been ten minutes, all the candy was gone; gobbled up. Maybe she was gonna complain because her brother got five candies and she only got three. I'm thinking, she's gonna ask for more candy.

She's about a foot away. I glance around quick. I want a teacher/parent/translator/anybody to help me. They're all busy; nobody available. I'm on my own. Just keep the phony smile on your face Santa. You've lived through worse than this. You can do it. Another hour at the max and you'll never have to be Santa again, ever.

The little girl extended her hand towards me. Great, I'll shake her little hand and say "Merry Christmas" one more time. I reached out to her.

She said "Santasan" and put a piece of candy, she had saved, in my hand ! I was struck. I said "Domo arigato gozaimusu". I'm loud. Everyone heard me thank the little girl. Every child there swarmed the stage. Their parents couldn't hold them back.

They all wanted to give Santa a piece of candy. It made me cry. To those kids I’m Santa. To those special kids I’ll always be Santa, forever !

Awesome Heart you have there, Mike. Your story would make Dickens snicker. Beautiful Spirit! Going to ruin your Image. LoL.. Love the site Thanks for Sharing.

Gene,
Thanks. I think all old geezers develop a soft spot for little ones but, these kids really got to me.

A really lovely story, Mike. The boots detail especially got me; of course. In Japan, Santa has to take off his boots!

It's The Pigeon Lady !
I was starting to think ya got angry with me over my pigeon post. Thanks for dropping in and hope to see you again, real soon !