What's Wrong With That Picture? Mayor in NJ Picks on Chickens 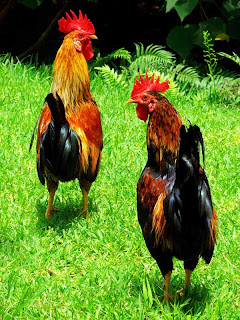 Today the Mayor of Hopewell Township in New Jersey gets his 15 minutes of attention on my blog.  When I browsed through AOL News of the Weird today, this gem was discovered and it only took me a few minutes to dig up something out of my files.  I knew if I hung on to this photo, with a couple of suspicious-looking roosters running around at the edge of town in Okinawa, Japan it would come in handy someday.  Now, I'm not asking anyone to tell me what's wrong with this picture.  What I'd like you to do is imagine some Mayor passing a law telling chickens when they can and can't mate. Roosters in the Township of Hopewell, NJ have to prove that they are free of disease and are forbidden from crowing about their escapades with the chicks. If they get caught bragging too loudly, they can even get kicked out of town for two years.  They are permitted to date chicks only for ten days out of the year.
Mayor Jim Burd must have way too much time on his hands or be really, really afraid of big roosters.

Mature, male roosters are not allowed because they are too noisy. The immature guys have to do the breeding ( I guess) in his neck of the woods. HAVE A LOOK if you think I make this stuff up.

Then, you tell me.  What's wrong with that picture?

Posted by RyukyuMike at 9:01 AM

Is the Mayor protecting the hens or his own sleep time? Waste of money just the time spent writing the ordinance in the 1st place. Make you go Hhmmm #$%#&*: Thanks Mike.

Gene,
The guy just has is own idea of what a boneless chicken should be!

Maybe this is his weird sense of humor peeking through. :)

LadyE,
That could be it. Now, I'm wondering. I have a weird sense of humor. Maybe, I could become a Mayor, too!