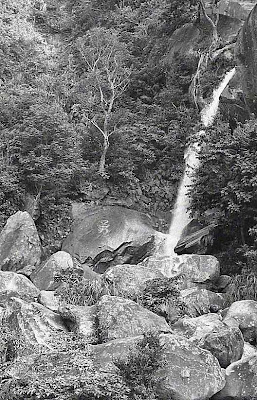 This photo of Todoroki Waterfall (轟の滝) in Nago Okinawa, Japan was taken sometime around 1966 or 67 by a photographer I recently became acquainted with through the miracle we call the Worldwide Web.


If you like good old fashioned film photography, as much as I do, you'll be able to enjoy hours upon hours seeing what Okinawa looked like back in the years 1945 through 1972 on his website.


Donn, has given his consent to allow me the use of his photos for a project I've been wanting to do for a very long time.


It will be a series of Then and Now Photos  taken on the island of Okinawa, Japan.

Here is a an example of what I plan on doing. 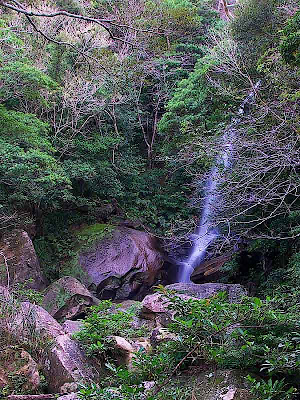 That would be some 45 years later.

Over the years, naturally, erosion has occurred.

The Kanji character ( 勇) for Brave or
Courageous has disappeared from the large boulder at the base of the falls.

Vegetation changes with the seasons and typhoons may move some trees around.

Moss grows on the boulders and stones.

But one thing never changes.

Please share this informative, historical site with anyone you know who has spent time on Okinawa, lives here now, or is preparing to visit.

They will better understand why Okinawa and it's people should be considered treasures.

Posted by RyukyuMike at 9:37 PM

Muza-chan, Just hope I can do those old film photos justice.

What a great project you're starting! Beautiful photos. I'm looking forward to this series.

Mary,
Thank you. It'll take me awhile.
I want to do a BangUp job of it and got a tad banged up falling at the falls. LOL !

Love old photographs and comparing them with today (especially of places I know well).

Sophie,
Same here. Things have changed so much over the years, any of the old places are unrecognizable, today.

What a fantastic project. I lived on Okinawa 1963-1966 so I can't wait to see some of the old/new comparison shots. Good luck with this project!

Deb,
Thanks for your support. I hope to, not disappoint you !

I remember in 1997or 1998 I was told the birds were coming back to the Island. They were chased away by the bombings during WWII and had never returned. I hadn't thought about it until then but form 1971 until that time I had never seen a bird on Okinawa.
BTW love you photos.

Mike W,
Huh ? They must have kept you underground somewhere.