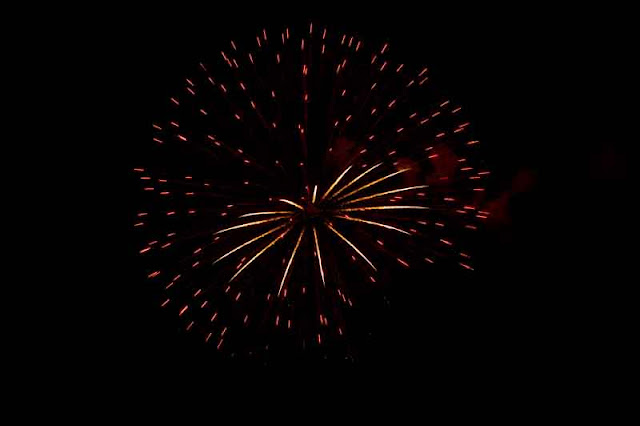 OK this isn't exactly how it went.
Last night I was having way too much fun to be fooling around with my camera.
So I dug this kaboom photo up from my stockpiles.
To the best of my recollections the sayonara party for 2011 was a blast.
People were singing, drinking, dancing, laughing and running to the powder room.
There was one guy I hadn't seen in years, an old friend, who showed up.
Once, after a barroom brawl, he sewed this man's finger back together while we were sitting at the bar drinking.  I can't tell you his name because he's a dentist.  They're probably not supposed to do those sort of things and I'd hate to see him get in trouble.  Don't you think the dentist or finger-sewing union would have something to say about that ?
The Old Year left.  The New Year showed up, right on time.
We didn't have any fireworks because somebody forgot to buy them.  I think it was me.
So, everybody just said, Happy New Year.
Then, started singing, drinking, dancing, laughing, maybe, some kissing and running to the powder room, again.
Around 4 in the morning I sneaked off to a dark corner of the bar to make sure nobody was sleeping on the sofa.  Then, that's what I did.
Somebody woke me up when it was closing time.  There were five or six of us left in the bar. 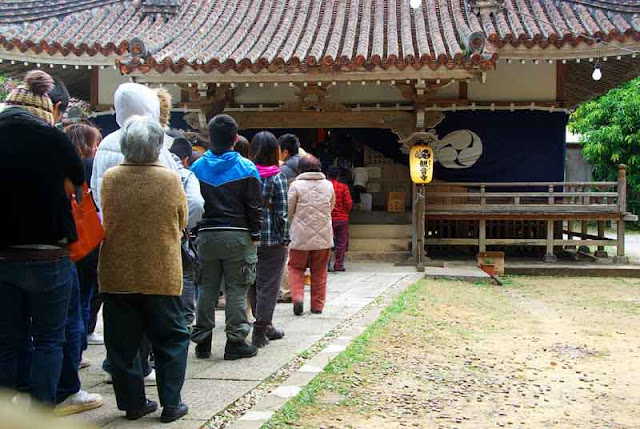 New Year's Day is when we make our visit to the temple.
We have a routine.  Everybody, who can walk, goes to the temple when we close the bar on New Year's day.
The photo above was taken New Year's Day of 2011.
There wasn't any crowd trying to get in at 6:30 this morning.
Only four people were ahead of us this year so, we got right up there.
Mr. T, my old friend who would make a superb emergency medical technician but became a dentist instead, was fumbling around in his wallet.  I think he was looking for coins.
So, I gave him some pocket change.  He stopped fumbling.
When you go up the temple stairs, you don't really go inside the place.
On the front porch you stop.
People pray or make wishes for the New Year.
There are boxes you toss coins into and boxes full of paper fortunes.
We tossed our coins, grabbed our fortunes and got off the temple porch to read them.
Everybody got good ones this year, I think.
If you get a bad one, you tie it to a tree.  Some people go back and try to get a better fortune and keep tossing coins until they do.  I think they are nuts.  Slot machine owners and temple keepers probably love those kinds of people.  Hah !
My fortune for 2012 is excellent so I stuck it in my wallet.   I'll read it later, whenever I find my wallet. 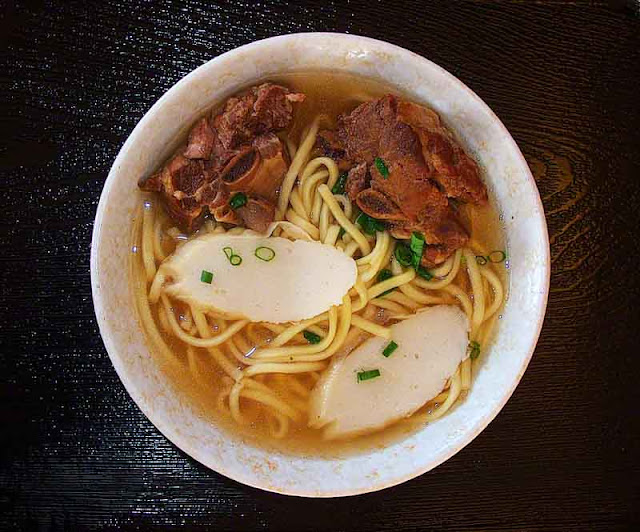 We went across the street from the temple to sit in a tent and eat some soba.
OKINAWA SOBA is some great food.
Sometimes, I call it Okinawa Sober 'cuz that's what it does for me.
It was daylight before we got home.  The dogs were jumping around at the door.
They helped me put their harnesses on and they took me for our first 2012 walk on the beach.
We had to hurry back up the hill to the house because I forgot to turn off the porch light and I had to use the powder room so bad, I almost went KABOOM.
HAPPY NEW YEAR !
VISIT MY HOMEPAGE FOR THE PHOTO OF THE DAY

Since you are a day ahead there, do you get to celebrate twice?

Jerry,
The calendar New Year, we only celebrate once. But, we observe the Lunar New Year when that comes around so, we do have two New Years Days over here !

Ryan,
A Happy New Years to you and yours !

Paul,
Happy New Year to you and yours, as well!