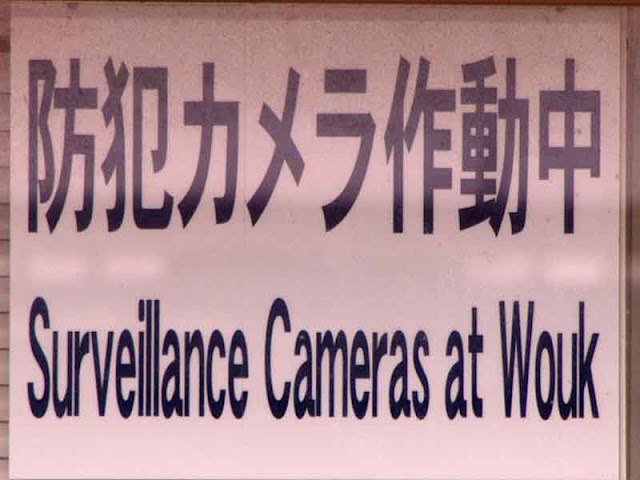 Surveillance Cameras at Wouk
The Sunday's Silly Sign business is getting a bit too risky for this old boy.
If it weren't for some of the leftover spirits hanging around under my skin from last night's
Year of the Dragon party, I'd probably have been afraid to try sneaking up on this one.
A good-sized zoom lens on my camera made it possible.
This sign is on City Property, not much more than a good spittin' distance from my office.
For those of you who don't know me very well, my office happens to be in a bar.
That's why, I really don't mind going to work, most of the time, anyway.
Well, I been thinking about taking a photo of this sign for quite a while, now.
Only, the Mayor of our town and every City Counsilman around here knows me.
They might not take too kindly to some foreigner shootin' pictures of this sign.
So, I had to come up with some sort of disguise, or something.
Not a problem.
The Chinese Year of the Dragon Party lasted 'til about 4 o'clock this morning.
There were pink, yellow, blue, purple and red paper streamers all over the place from these non-explosive, noise-making, exploding things everybody was shootin off at each other when the clock struck New Year's, last night.  Sorry, no photos.
That mess of streamers gave me the idea and enough courage to go out and nab a picture of this sign.
What I did was set my alarm to wake up real early this morning.
The dogs got walked quick.
Then, I hurried over to the office.
With a pile of those streamers on my head and my camera tucked under my jacket,  I planned to sneak over to the park where this warning sign is posted.
It was daylight but, with the decorations hanging off me, I figured nobody would recognize me.
I looked sort of like a crazy person.
As an extra precaution,  I took my yellow flip flops off and left them behind.
Then,  I traveled in not-so-straight-a-line to trick anyone who might be watching.
To my surprise, there was a cleaning lady, or somebody, in the building.
Why anybody would be working in a City Office building on Chinese New Year's Day beats me.
That's crazy.
Anyway, the camera went SNAP, SNAP, SNAP.
The Sunday's Silly Sign photo was done and I got the heck out of there.
Ran straight back to the office, got my socks and flip flops on because I was wet and freezing.
Took those stupid decorations off my head and threw them in the trash.
Now I don't look so crazy anymore.
The words in silly signs, I always like to run a check on them before publishing.
Surveillance, that checked out alright with the Google thing that checks words.
Anybody know what a WOUK might be ?
Hope I didn't step on one with my bare feet while I was in the stealth mode.
I'm gonna go home now.  Take a hot shower and rest up awhile.  Head hurts.....
Happy Chinese New Year !