Before and After (Photos) 2d Annual Trip to the Barbershop 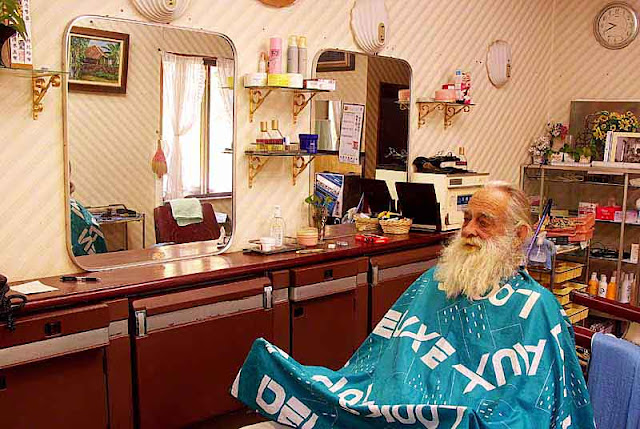 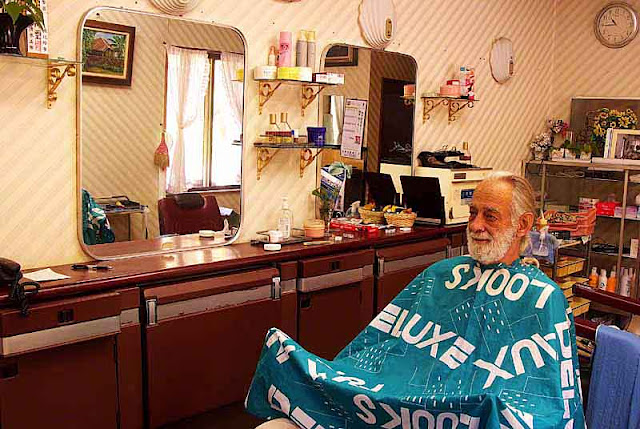 Today's photos were taken by a Guest Photographer, Ryukyu Rusty.

This would be my 2d annual trip to the barbershop because I believe in energy conservation.

So, I get my hair and beard trimmed, only once a year, whether I need it or not.

That helps keep the electric bill down and I save a few bucks on shaving stuff.

It keeps young girls from running up trying to smooch on me but, that ain't the only reason for

See, I play Santa Claus every year and don't want to wear one of those fake beards.

The downside to having a beard that long is, it gets tangled up in my tripod sometimes when I'm shooting on a windy day.  And, plenty of times throughout the year, I get my whiskers stuck when someone closes their electric windows while I'm hanging out sniffing the countryside.

Used to be, I would cut and trim the beard every year after the Santa Claus gigs were done and the Missus would cut my hair.  But she always gets carried away and was clipping all the fur off my back.  So, she ain't my barber no more.  The fur is on my back for a reason and  think I it should stay there.  So, I found a professional barber lady.  One who listens to me.  Hah !

Last year, Ryukyu Rusty and I found this barber who let us set up tripods and cameras and shoot the whole process of getting a haircut in a Japanese barbershop.

Well, everybody was a little nervous, I guess.  Especially me.  I went through two hours or more sitting in that chair.  You get cut, snipped, dunked, scraped, spun around, shampooed, rinsed, lathered, hot and cold toweled and, I can't remember all the whatnots done.

When it was time for the AFTER photo all I wanted to do was get out of the barber chair and run.

We were in such a rush to get out of there, we didn't notice the DELUXE LOOKS thingy I was wrapped in was on backwards when we took the second photo.

We got the gal to do the 2d annual haircut and beard trimming on a day the barbershop was supposed to be closed.

Then, we set up a tripod and camera and took the BEFORE shot.

All we had to do was remember not to move anything and make sure the drape, or whatever you call those things, was positioned the same way for the AFTER photo.

The dunking, shampooing and conditioning,  I told the gal save that for somebody else.

I just wanted a trim so we could get out of there with our BEFORE and AFTER.

All was going well.

The only thing that could have kept us from having the exact same position on the camera frame would be if someone moved the tripod or the camera lens.

One time, the gal spinned the chair around and I looked over to see what Rusty was doing.

Rusty and the camera were gone.

A green bird flew by across the highway.

RUSTY RAN OUT WITH MY CAMERA AND TRIPOD TO SHOOT IT !

WTF (Wed/Thu/Fri) ain't that what it means ?

Here I was on my 2d annual trip to the barbershop to get the exact same BEFORE and AFTER pictures taken and the photographer runs out the door with my camera to shoot a green bird !

Can't blame the guy.  I'd have done the same thing.

It can't be helped.  We're rednecks.  Wildlife is more important.  Ya know ?

Rusty and I are real good friends.

He even wants me to be the photographer at his wedding.

It's going to be outdoors, too.

Be best if no green birds fly by.

Posted by RyukyuMike at 6:35 PM

Well, I would like to say that you look plumb purty after you got your hedge trimmed, but I just can't bring myself to actually do it. Sorry.

Jerry,
That's 'cuz I left the massage part out of the story!

You know - this could also be turned around... as the after will be the next before (if you get my drift). What I really loved was the clock in the background... that's over 1 hour of hard work. And that hard work paid off.

AdilaideBen,
Yep, that was over an hour. Last year it was over two hours. Guess my hair's thinning out !

I'd be more than happy to visit the barbers twice a year, however the wife nips my ears if I don't keep the mop short and I'd rather have a peaceful life...

Ryan,
The wife usd to nip my ears 'til I learned to bite back!

I love the Santa Claus's with real beards! Boy you clean up good! ;)

Alison,
Aw, Santa loves you, too!

That was a good read !