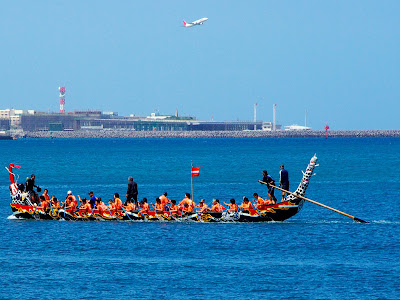 Sometimes a wildlife photographer shouldn't be allowed to go to the big city. This past weekend I shot everything but wlidlife, but sometimes other missions take priority; like trying to earn a living.
Saturday was a Mud Festival shoot and Sunday was Dragonboat Races, all part of the weeklong holiday called Dragon Week in Japan.
For the past week, I've been trying to figure out some Word 2007 program to make my life easier and Billybob Gates and the Microsoft heathens have been installing all kinds of Explorer stuff to make my PC run faster and the print on the screen smaller to make me stay up later at night squinting at the screen.
So, staying up late and waking up early to go shoot festivals got the better of me and my cameras. I should have known better, no, I DO KNOW BETTER; I just got stupid.
Wildlife photographers always keep their lenses clean and make sure there's no dust on their sensor. As a force of habit, I always clean my sensor ecerytime I change lenses-ALWAYS!!!
Well, I went to switch lenses the day of the mud fest and it was around 4AM. I took out my cleaning kit and removed my big zoom to replace it with a smaller zoom. Covered the lens I removed and grabbed my mini-turkey baster to blast air on my sensor. Turned the power switch on my camera to raise the mirror and the dang thing tells me there's no battery in it !
My batteries were charging for the busy weekend. So, I figure it won't hurt to skip cleaning the sensor (just this one time) and slapped the lens in.
Two great days of bright, sunny weather. I had plenty of spare batteries and Gigabytes of extra SD cards. Lots of action and hundreds of great shots. I kept the same lens in the camera all weekend and just made sure the outside of the lens stayed clean. Still have lots of photos to process on a rainy day, but, it didn't take long to discover: I HAD DUST ON MY SENSOR ALL WEEKEND !
The photo above was easy to fix. I cropped it so the dust didn't show. Some of the other photos won't be so easy to fix. Dust can be removed by cloning it out. That means buying another progam and spending more time squinting at a computer monitor !
I SHOULD HAVE KNOWN BETTER !!!!!!!!!
Posted by RyukyuMike at 3:09 AM

Easy fix, buy one of those 54 inch plasma T V's and use it as a monitor. It makes everything bigger.
MARIO

I discovered dust on mine, after shooting an awesome tree...I saw dust against the sky. I was mad. Oh well. Great entry!