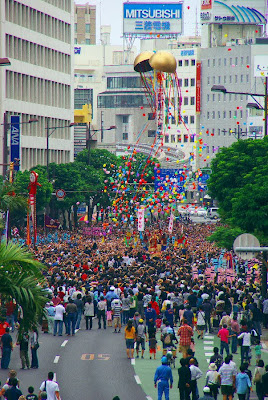 This year I swore I'd get some wide-angle shots of the Guiness World Record Tug-O-War in Naha. Magazine editors are always asking for shots that show the whole scene. They weren't too wild about my photos last year where I got in the middle of the crowd and attempted close-up shots.

What you see here is a shot I made from a pedestrian overpass a few hundred yards up the highway. It was kinda cool being able to set up a tripod, tweak exposure settings, adjust focus and zoom without being bumped around in the crowd below.

PLUS, you can get ARRESTED for smoking DOWN THERE. Whatever happened to SMOKER'S RIGHTS ANYWAY! Presidents, kings and even some queens and dictators smoke. So why'n hell can't I ?

This scene doesn't capture the whole 15,000 people pulling on the 40 something ton rope, in fact, I doubt you can see a thousand folks down there. The idea here was to capture some sight of the rope, crowd at the start of the event and the golden ball opening, showering balloons , confetti and streamers on them as the signal to PULL.

Maybe you can enlarge this shot on your screen and see more details. The reason I'm late updating here and on my website this week: I had a few hundred more shots to develop and still have to sort them out for publication. Not here, of course; this blog doesn't pay me!

If you absolutely want to see more now, visit my shootin' pardner, Doc, over at:

http://goyarepublic.blogspot.com/2009/10/great-tsunahiki.html he's got the whole story and probably doesn't say anything about SMOKER's RIGHTS, either !

To be continued...
Posted by RyukyuMike at 5:31 PM

smoker's rights?! pff ;) i never think to get away and capture the while scene..thanks for the tips!

Bec,
Thanks for dropping-in. Had to change my security settings and start moderating because of Spammers.Hope it wasn't a hassle commenting.