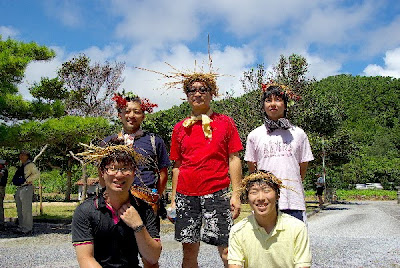 Here's a shot of Masateru Yamamoto (Center) surrounded by Tatsuya Taujino, Hideyuki Kurasawa, Norimasa Tanaka and Yoshimitsu Shinkawa a fine group of folks I met in the village of Ada Kunigami Okinawa, Japan when I was getting ready to climb the mountain just before the Shinugu Matsuri. They were visitors to Okinawa from somewhere up in the mainland and I got the big fellow to sign a release form in exchange for a promise to email him a copy of the photo.

My wife made me these neat Model Release Forms (In Japanese Kanji). They say something like "Put your name, address, email, phone number HERE and the guy with the camera will give you a FREE PHOTO. In exchange for that you give him permission to enter your photo in contests, have it published in magazines, sold in his gallery, or anything else that ain't against the law, like printed on Madonna's underwear she keeps forgettin' to wear.

Anyhow, after emailing the big guy the photo and finding out he wanted a larger size, I asked him if he'd like to have it published in a magazine. The only catch being, everybody in the photo would have to give me their names and consent to be published. Some magazines are picky about things like that, so, I have to make sure I do the stuff legal-like; magazines don't want to get sued and neither do I, over a picture I took.

Well, a few days later Masateru emailed me with everybody's names and not only permission to have the photo published, they asked to be published and wanted me to tell them where and when they'd be published. So, I stuck the photo on flickr and emailed them a LINK to show them their photo with names in the caption and everything. Then, I went about trying to REALLY GET THEM PUBLISHED. I could tell they had been looking and showing their girlfriends, or somebody, because as of yesterday the photo IMGP4586 had EIGHT VIEWS !!!

Last night the photo was REALLY PUBLISHED and I StumbledUpon, Tweeted, Delicious Bookmarked and FaceBooked it. Then, went back and added
my magic to the photo on Flickr.

Them Dudes got A HUNDRED AND TWENTY-FOUR HITS, OVERNIGHT !

That's the magic of using Model Releases, your social networks and Flickr, properly and legally. They get their names and faces in print and all kinda folks hittin' on them and I can't get sued.

Gotta run now, though. I think Madonna's lookin' for me!
Posted by RyukyuMike at 4:50 PM