Who is Rose Witmer ? 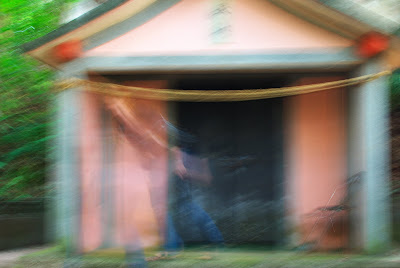 Well, I promised I'd introduce the new writer as soon as she got published. I also promised her I wouldn't post a photo of her until she got to see it and approve. Haven't been able to catch uo with her for her approval so, I did a little compromise, here. She's a busy gal, always on the go and I just can't keep up with her but, I can't keep letting my blog sit here with no photos on it, either. So, here's Rose Witmer, on the go.
She got published in the same magazine I did, my first time, Apogee Photo Magazine
Then, a few days later, hit Romar Traveler Magazineand she's chomping at the bit to hit every magazine she can. If I ever catch up with her and get a chance to have her select a photo she wants the world to see, I'll post it here. Until then, you'll just have to keep on guessing: Who is Rose Witmer ?
Posted by RyukyuMike at 3:33 AM

Who is Rose Witmer?
Rose Witmer is a normal human being that tries to perfect the art of time travel and dublication, being everywhere and doing everything at once.
She's not very good at it, but it keeps her on the run.

Who is Rose Witmer. The best daughter in the world. Keep up the great work. I look forward to seeing more articles and photos.

Anonymous Dad,
Ya done a good job raising that daughter.