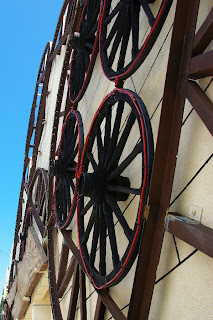 A shot like this is one I rarely take in the form I used to get it. The light was just right for what I wanted to do; clear blue skies and it was a photo I'd seen done before only, I wanted to do it better.

No tripod, no LCD screen and no way to look through my camera's viewfinder, it was a cameraman's worst nightmare. Probably, about three feet from the wall were a bunch of telephone and electrical wires to mess up the wide angle shot, as well.

Here's how it was done. With my Pentax, equipped with an 18-250mm lens, I laid it on the ground and propped the lens up with my cell phone, a pack of smokes and a lighter. I set the 10 second timer.  In fully Manual Mode and Auto Focus, I read the lightmeter on the outside of the camera body. From perfect exposure, at f/8, I stopped down on the shutter to minus one (underexposing) because I knew it was a high contrast shot.

The angle I aimed the lens at was just pure guesswork. The shutter button was pressed and I leaned back and waited 10 seconds. The camera fired and I packed up and went home figuring if nothing else, at least I'd have a nice patch of blue sky with some wires in it to analyze and I could always use the shot to try and figure out how to do it better, next time around.

See, I figured the photographer who shot the original scene (I'd seen in a brochure) used PhotoShop or something to clone the wires out of his picture. I'm not into doing that sort of thing.

But, to my surprise, when I processed the RAW file, I discovered the wires could be cropped out of the picture. With a little tweaking in my RAW developer, I can take the lens distortion out of the wall, put the color and contrast (I removed to post this online) and I'll have as good, or better photo than the last cameraman that made this shot.

The other option, I've been thinking over is using a camera with a rotating LCD screen. Canon's got one of those little cameras that's a Point and Shoot.  It'd fit in my pocket, shoot RAW, it can fire fully Manual, I'd never be without a camera, even when I'm walking three dogs and It would help me explain how to shoot little cameras better. Hmm.... Canon G11's lookin' better every day....

Posted by RyukyuMike at 7:43 AM