What the Heck Is a Horohoro Forest?

12 Photos from a Nature Hike

There were three of us, long-term Okinawa residents, on this excursion.

With a grand total of almost a century on the island, we've never been here before. 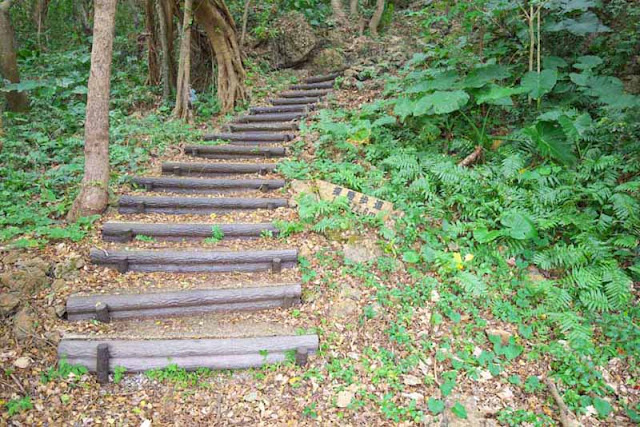 One of the things I love about the Ryukyu Island Chain is the discoveries to be made.

Just when you think you've seen it all, something else will pop up. 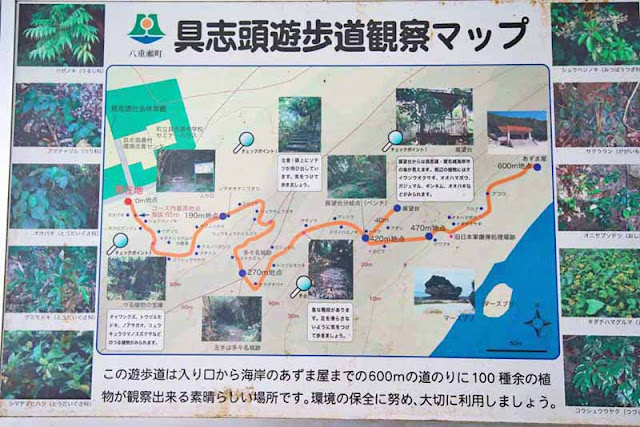 Fooling Around in the Travel Industry

Over the years we learned to make use of the travel information offices.

People become great friends when they see a couple of foreigners promoting travel and tourism. 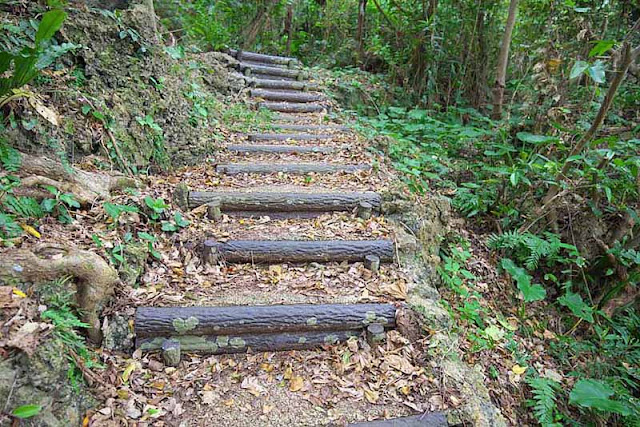 Dozens of times, we had traveled through this area and never noticed the Horohoro Forest.

Last year, we promised to take a girl named Yuka out for lunch.

Her 28th birthday was in October. She's always helpful. We owe her a steak dinner.

Well, a typhoon or something happened and, we missed the date! 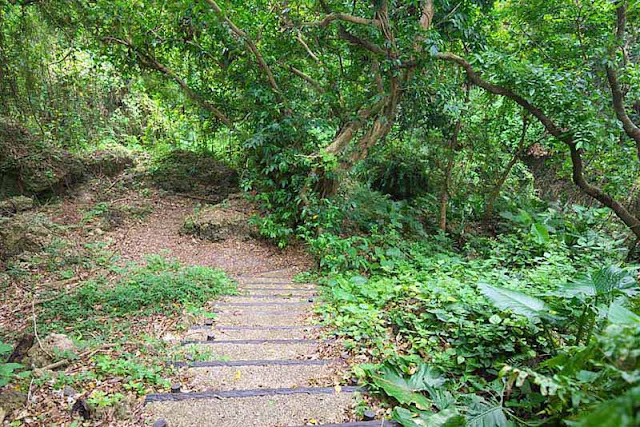 Here's what led us to Horohoro. We promised to take the gal to lunch, again.

This time it was supposed to be something a little bit different.

Have you ever heard of Flying Fish Soba?  Me neither but, that was the plan.

Yuka, being in the travel and tourism business, was promoting the fish and noodles soup.

Yuck. I told everybody if the place had Hamburger Soba, I'd order that. 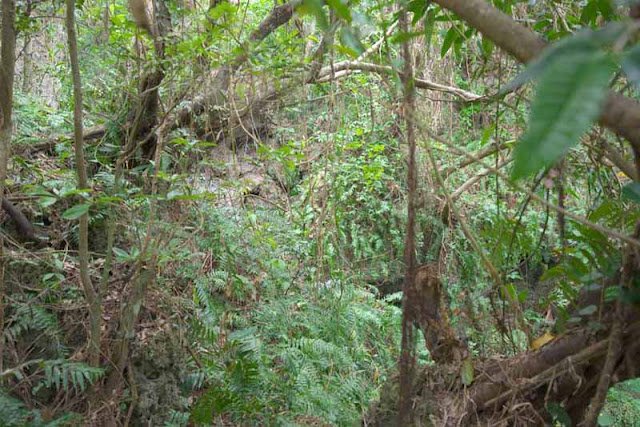 The girl wouldn't be free for lunch until noon so, we had some time to kill.

In a brand new travel information office, I noticed a map with Horohoro on it.

Asking a guy behind the counter, where Horohoro might be, he helped me.

He came out from behind the counter and pointed at a green-roofed building.

Up there, behind that building on the hill, Horohoro Forest could be found.

Bumbling around, making believe you speak Japanese and stuff, goes a long way.

The forest was up on that hill and we had a bit over an hour to kill. What could go wrong? 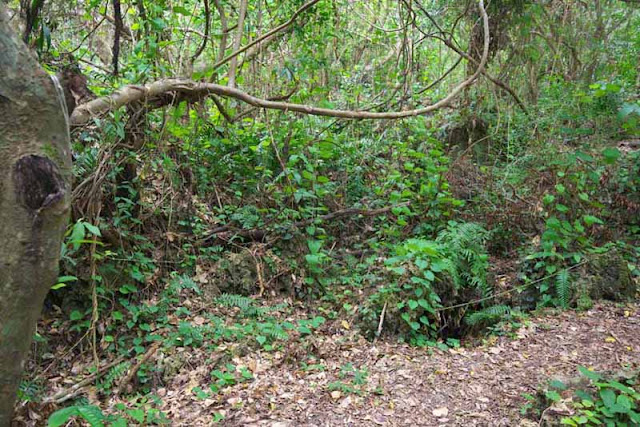 Three elderly gentlemen with a young date pending, should get out and exercise.

So, there we were, huffing and puffing up and down the jungle trails.

Just picture it. Man against nature. Earthy elements and stuff like that. Wilderness.

Fortunately We Traveled in a Pack

It's easy to get carried away and forget about a young gal and stinking fish soup.

The wife told me, flying fish soba would be good for my heart. Yuck.

Anyhow, up and down the hills along that trail, the steps made navigation fairly easy.

Nobody was out there except us. Toilets seemed to be everywhere behind any tree.

Um, I mean, "They don't have any." You have to use your imagination. 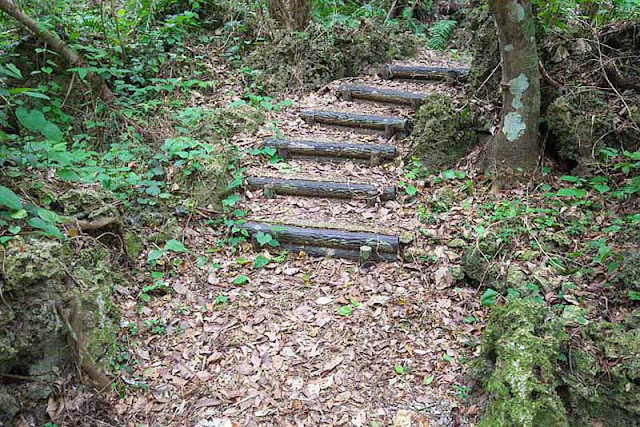 About halfway through the nature trail, we came across a second map signboard.

You know, where the red dot is means, "You Are Here."

Just past that sign, the trail took a big dip, going downhill. We checked the time.

There was no sense going down a steep grade if, we had to hurry back up for a date.

If, you ever get old remember, travel in packs. It's smarter than traveling alone. 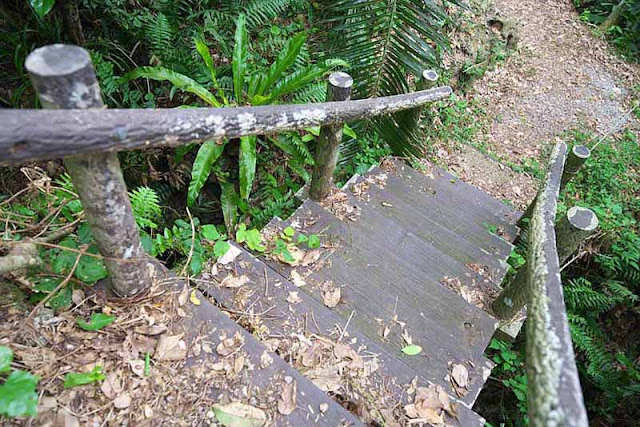 For being out in the wilderness, this trail is really well maintained.

Wooden stairs and handrails aren't something you'd expect to find but, they were. 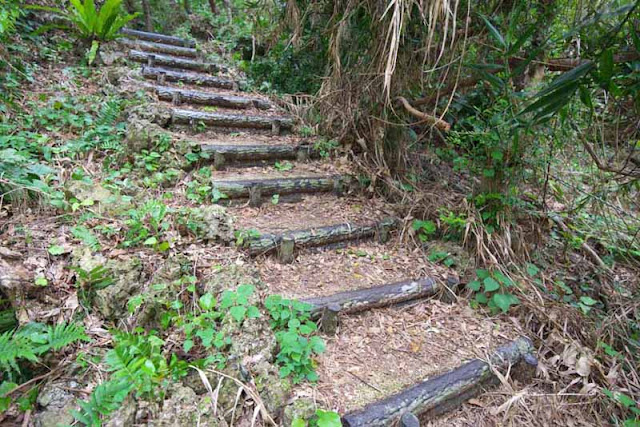 Going up and down the steps along this trail can give you an appetite.

Even though my stomach started growling, I wasn't looking forward to flying fish soup.

Funny thing: We found the spot where it's sold and, I told the guy there, I'd be back for lunch. 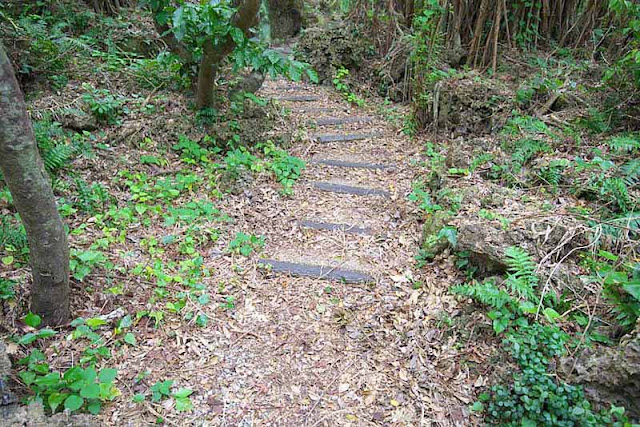 Someday, I'll have a Part II for this trail to show you. I want to go back.

According to my calculations, after about 600 meters of hiking, it leads to the sea. 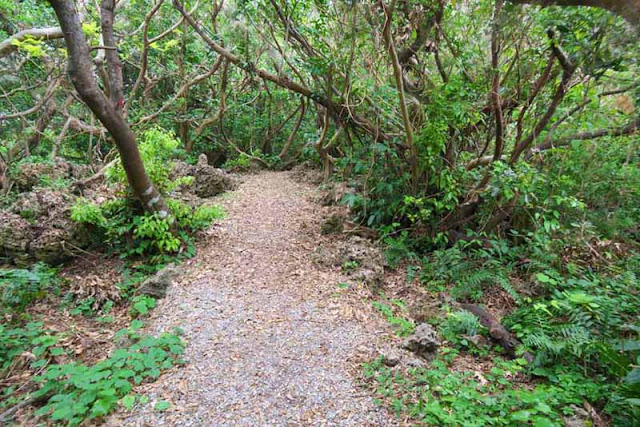 We had to hurry. No sense in standing the birthday girl up, two years in a row.

We got to her office shortly before noon and went across the street.

Not five minutes away was the Every Choice Steak House.

Smooth talkers insisted on buying Yuka a steak dinner. Soup is too cheap!

While waiting for our orders, we mentioned the Horohoro Forest experience.

On my iPhone Google Maps, didn't have the place listed.

Even in Japanese, Yuka couldn't pull it up on my phone. So, I told her I'd add it. We walked halfway through a cinnamon forest and, I didn't bite one tree!

A few years ago, I had a cinnamon tree encounter and, got to bring a chunk home.

Heck, I eat cinnamon every day and spend my hard-earned money to buy the stuff.

Must Return: Forest of Horohoro

Yaese Town Forest of Horohoro
Posted by RyukyuMike at 2:43 PM