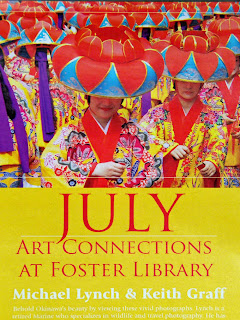 There's lots more involved in being a cameraman than most people realize. Just loading up a bunch of cameras, lenses and accessories then going out trying to capture the Photo of the Century is only a fraction of the job.

Shooting, as we call it, that's the fun part. Getting your photos recognized, that's work. But, your pictures won't get noticed if you do what I used to do when I had a film camera. I'd get them developed and fill up empty shoeboxes with them. See, I was recycling way before it became fashionable.

Every now and then, a photo would strike my fancy and get stuck in a frame or mailed off to someone. A collection of OK shots might have even got put in albums, something that might be worth passing on to the family, but the majority of my film shots are still in shoeboxes, somewhere, weighing the shelves down. The negatives may or may not be with them. But, what the heck, none of the photos were taken professionally.


Nowadays, I know better. Every shot has to be taken professionally. There's no more snapshooting.  Every click of the shutter is preceded by deliberate calculations. Lighting conditions, compostion, exposure, point of view, simplicity, focus, making the subject look its best; that's my sole purpose. And I love it. Taking the picture isn't work for me. It's a challenge but, it's also a pleasure. I love it.

The work part of the job comes when the camera is downloaded. Instead of dropping off the film at a drug store or kiosk somewhere to get processed, it's me and the computer going round and round. And there are many more hours spent in front of a monitor than there were behind the camera. But, the finished product doesn't get stuffed in a shoebox to be dragged out whenever there's a family get together. The original files are stored on DVDs, external hard drives and other places much safer than a shoebox in a closet.

Tiny, web-versions are sent to online publications, entered in contests or emailed to friends. The creme of the crop, they get special treatment. Printed, framed and hung out to dry, they go on exhibit. They get to hang out at places I'm not even comfortable hanging out at and when arrangements are being made the folks email me and call me an artist!

When I go to hang my pictures I try my best to look presentable. Showered, dressed up in slacks and a shirt with sleeves and even put on real shoes, instead of my flip-flops. Then as soon as the photos are hung and we leave the air-conditioned building I tell Doc (Designated Driver), "Lets get outa here and go someplace comfortable, quick"! Its all part of being a cameraman. And I love it.

Posted by RyukyuMike at 3:51 AM