How It's Done: Catching Jumping Fish With Your Digital Camera 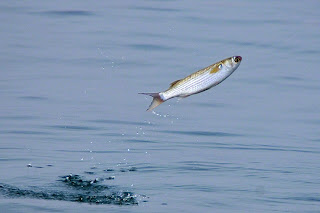 Capturing fish jumping out of the water is just like capturing any wildlife in action.

It's done by watching, waiting, studying their habits and learning their patterns of behavior.

Not much different than trying to catch some rambunctious children at play. It's easier than shooting kids, for me, actually because most animals are predictable!

These guys, I learned from watching, patiently, jump in pairs a few seconds apart. So, when one jumped, I'd start zooming-in near the area he jumped from.

It wouldn't be a split second later, one of his sidekicks would jump from almost exactly the same spot.

Then, I'd fire away with my camera in the Burst Mode.

There's a few more tricks you need to know if you want to do like I do and shoot in the Manual Mode. You can stumble around in my GALLERY and find the camera specs I used shooting the fish but they won't be taken at the readings my light meter told me to use. See, the water's pretty dark. But when the fish jump and the sun hits them, the available light changes drastically.

There's an Ebook forthcoming. I can feel it. It's just on the back burner, for now.

STAND BY FOR MORE