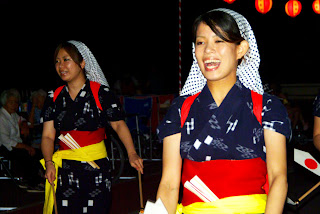 Living in Okinawa for over half my life I sometimes forget that things I may see everyday and take for granted would be news to folks back on the other side of the world.   Eisa Dancing?
It's something that has its roots in Buddhist Culture and has to do with Ancestor Worship, old time religious ceremonies, stuff Priests and Priestesses would do at funerals.
There ain't no sense in me trying to explain all the morbid details here when you can Google or Wiki-whatever and see what the experts have to say.

This time of year I get real busy running all over the island trying to keep up with all the Festivals going on and catch as many photos as I can to share with the world. There aren't enough hours in the day for me to keep shooting, developing and posting new material, daily on my blog and website so, I get caught recycling not-so-new material, every now and then.

Well, this picture and the one on my Homepage are brand-spanking new, shot last night, just down the street from where I live.
In fact, I have to chase these gals down and get them to sign Model Releases. I don't throw anybody's photos out for public viewing without their consent, usually.

These gals are no problem. They want their photos on my website. They know, once they sign my Release Forms, they'll get a High-Gloss Print for free and maybe even a framed picture of them will adorn the walls of my bar.

There will be a crowd of anywhere from 30-50 of these characters filling-up my little karaoke bar , singing and drinking 'til the wee hours, every weekend from now until the end of Summer.

See, they're regular customers of mine and if I get any complaints about the photography it'll be from the ones who didn't get their picture taken, not those who did get captured on digital film.

During Obon, the season where all this dancing and drum-beating originated, they even bring the whole gang of twenty-some year olds inside my bar and perform, making a racket that'll split the ceiling plaster.

If you want to know more about Eisa Dancing and see a variety of photos, some that may surprise you, have a peek at Matador Network. I've got to charge my batteries, clean some lenses and get back out on the road before Summer ends.

Posted by RyukyuMike at 8:23 PM