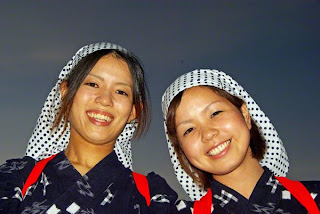 Close to halfway done developing RAW shots from the Festival the other night and decided I'd better post something before I get too tired to type.
This photo was taken as the sun was going down behind the scene so, I threw a little weak flash on the gals faces.
The biggest problem I have shooting young folks over here is when they know their photo is being taken, they like to throw the Peace Sign at you.
It makes for some pretty goofy pictures, I think so, I tell them get their hands down or I just zoom in and crop the hands out of the picture.
If I remember, I'll throw some of the goofy photos on here later and let you be the judge.
Meanwhile, this old boy needs to rest and save my eyes for more important stuff, like taking more pictures. More later.....

Here ya go. I grabbed an iced-coffee and got my second wind. Which photo do you like best?

Posted by RyukyuMike at 7:27 AM