Lost and Found in Japan: An Insider's Tip 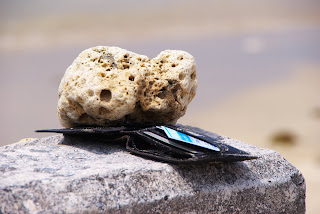 A LOST WALLET
Lost and Found:

My teenage son and I once found a wallet in a parking lot in Okinawa, Japan. It contained a young Japanese girl's ID and money, so we did the right thing. We took it to the local police station.

Every policeman in the station counted the amount of money in the wallet and made me watch to confirm that it was the correct amount before putting it back inside.

The shift changed at the police station while we were there so, of course, the counting and verifying of every piece of change had to be done by every cop in the station, again. They'd write down the quantity and amount of each coin and bill, have me initial each column on the form and watch as they placed each item back in the wallet. Then, I'd sign my full name and they'd stamp the forms with their red-inked stamps.

Once they were done, I was told I could get anywhere from 5 to 20% reward, and if the wallet wasn't reclaimed in 120 days, all the money would be mine. The entire process took three hours, I didn’t want any reward, I just wanted to go home.

Now, I know why nobody in Japan likes to turn lost and found items into the police!

Luckily, the girl was contacted and showed up to get her wallet the next day.

The wallet in the photo was probably dropped by someone fishing from the seawall. Whoever found it did the smart thing; placed it where the wind or waves wouldn’t take it away. It sat there for a week. I know because I walk that beach every morning. I’m positive the wallet got back to its owner. More than likely, no police were involved !

There's something to be said for the integrity and honesty of the folks on the Ryukyu Islands.

How are things of this nature handled in your neck of the woods?

Here in Helsinki people generally hand things to the nearest official-type person they can find or then take them to the local Police Station.

I once left a pair of very expensive sunglasses on a train and got them back five weeks later.

The person who found them was on a boat-train and didn't have time to hand them in when he got off the train at the harbour, so took them with him to Sweden for a month, then handed them in at the railway station on his return to Finland, and the railway company called me on my mobile to tell me they were available for collection.

Helsinkiph,
It's refreshing to hear that there are still honest people, probably around the world. We only get the bad news through today's media !
Thanks fo taking the time to read and comment. It means alot to me.

I love this story. It makes me want to go to Japan. Such honesty we don't find where I come from - or most anywhere, I guess.

Sabina,
It'd probably be a bit different in any major city in Japan. There you'd probably have to wonder what percentage would do the right thing. Maybe someone needs to do a study. Is there a different level of honesty between country and city folk? Or does religion, culture, wealth or climate play a role in what tod do when you find a wallet? Hmm...

Just stumbled across your page, and am enjoying reading the hints and tips.

One of my friends lost their wallet in tokyo and retured the next day to look for it to find it sat waiting for them. Even the big city is full of honest people.

Cayden,
Glad to hear that. I hope the northern areas of Japan are pulling through the disaster alright. I've been bombarded with people asking how they can help. For now, I just tell them it's a bit early. Emergency responders need time to do their work.