Look at What I Stumbled Upon ! 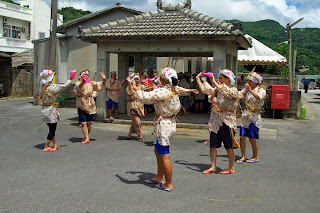 UNBELIEVEABLE GOOD FORTUNE !
This is a scene I literally stumbled upon around 1PM yesterday afternoon.
Months of preparations, visits to the remote location, translators helping, interviews with the locals, researching online, nothing prepared me for this.
Saturday night we drove to the village of Ogimi. We scouted out the area in the rain as the sun was going down.
In a little Mom and Pop store I found sake. I asked the woman at the checkout which was the most popular with the locals and bought a bottle.
We asked about the village office and discovered it was still open. We got a ride there in an air-conditioned van. It was quite a distance away and I'm glad we didn't have to walk in the rain.
My translator met with some officials. She gave them the sake and they put it on the table with the sake and beer they were drinking.
Real nice folks, they shared some drinks with us while we asked lots of questions about the events that would take place Sunday. The Unjami is a Festival held only once a year. I like to know what's going to take place and where so I can get the best photos possible when it happens.
We camped out under a bridge right alongside the ocean. The place had a great breeze and felt better than air-conditioning when I'd been there before.
It rained on and off all night long. It was dry under the bridge but I almost froze to death. It was cold.
I cat-napped on and off all night long. It rained on and off all night long.
It was good to see the sun come up. I wanted it to get back up in the 90's like it usually does. I like it hot even if I do cuss the heat occassionally, I'd rather be hot than cold.
It warmed up pretty well after sunrise but, still rained on and off through the morning.
We had three seperate districts to visit in the village to catch all the festival events.
It was pretty much a gaggle of photographers stumbling over each other at every event I went to throughout the day.
A mad dash here, rush to get there and set up a camera to shoot from the best location. Then, just when you think you're all set, another dozen idiots with cameras show up. And they screw up your preparations. You move, adjust and recompose. And another dozen idiots show up.
Then there was a mad dash back towards town where the main event would take place in a harbor.
No parking was available. Streets were blocked off. No problem, we drove back to the outskirts of town. We'd park under the bridge where we slept and walk back into town.
That's when I stumbled upon this scene. No other photographers were there.
To be continued.....

Posted by RyukyuMike at 6:32 PM