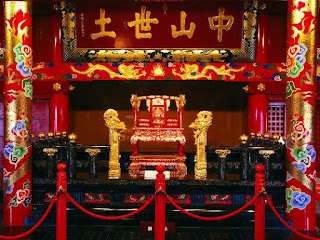 
The throne of the Ryukyu Kingdom, Shuri Castle located in the hills above Naha was the center of the kingdom’s trade, culture and politics and in fact, Naha is still the capitol city of Okinawa, today.

Best guesses estimate the castle was originally built during the 12th or 13th Century and records indicate that it was burned-down and reconstructed several times over the years.

In 1945 during the battle of Okinawa, the castle was destroyed. Construction and restoration began in the early 1990’s and today it is the most visited tourist attraction on the island.

For more information on Shuri-jo (Castle) and other UNESCO World Heritage Sites on the island of Okinawa, Japan click on the title to this post.

Posted by RyukyuMike at 3:50 AM