Photo Of The Week: A Dragonboat at the Unjami 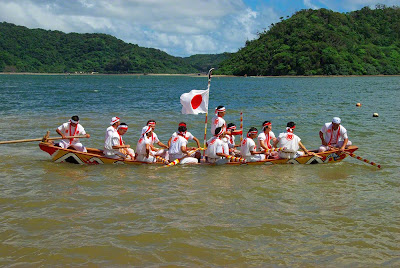 Here ya go, one of the photos of a boat taken at last Sunday's Unjami Matsuri. That's a Festival held once a year in the northern Village of Ogimi Okinawa, Japan.


There's probably another 100 or so pictures in the developing process but, I have to get something posted online before the folks up there start hunting for me.

See, I promised them I'd be posting their photos this week for them to see. Once I get caught-up, I'll print what I think are the best and drive back to the Village and present them to people.

It's really a lot easier to post them online and let folks tell me which pictures they'd like printed. The problem with that is: PEOPLE LIKE TO STEAL PHOTOS OFF THE INTERNET.

CAN YOU IMAGINE THAT?

So, what I usually tell everybody I know who shoots decent photos is:
DON'T POST ANYTHING ONLINE THAT YOU DON'T WANT STOLEN.
It works for me.

The best of the best photos I take never see the digital daylight of the internet. They get hidden.
Then, the 2d and 3d place best photos, I do stuff to them before posting online. You can't stop people from snatching your hard work, for free but, you can catch the suckers pretty easily.

Anyway, back to the Dragonboat photo. The night before the big event, while we were drinking with some of the Village VIPs, I was asked by some young guy if I could get a shot of him in the Dragonboat the next day. So, I promised I would.

All I know for sure is, the boat was red and yellow and the Dude had black hair. I think I got him.
If I didn't capture him in this picture, he's bound to be somewhere in the next few batches I develop. More later.....

Am missing all the action. Hope I get a good break elsewhere ... and soon, so that I can pick up from where I dropped off before it's too late !!

Sumitran,
Long time no see. Hope you're doing well and thanks for visiting. I've been pretty busy, too. Have to remind myself to take a day off every once in awhile. Half the time, I don;t know what day of the week it is anymore!

Wonderful shot, Mike Thanks for posting at Travel Photo Thursday!

LadyE,
Hah, good thing you reminded me it's Thursday. I'm loadin up the sled for Xmas, now !