Here is a sneak preview of the Full Moon Festival I attended in my Village, Kin Cho Okinawa, Japan on August 22, 2010.

Hopefully, this photo essay will give you an idea what takes place in the Ryukyu Islands at a Harvest Moon Festival and how serious Ryukyu Mike is about capturing it all on camera. 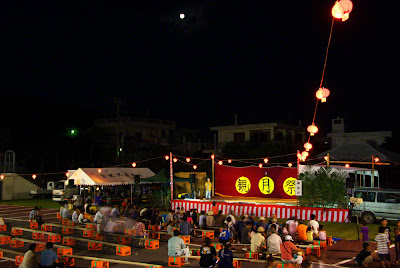 I left my office with cameras loaded and walked to the festival grounds about 6PM.
It's always a good idea to arrive early and check out the lighting.
The moon was just a speck in the sky above the stage. 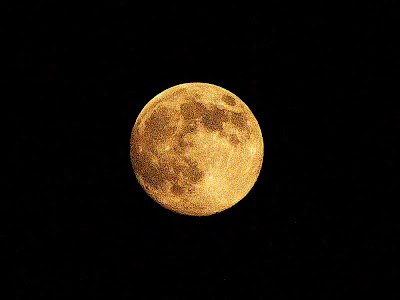 So, after I took a wide-angle shot, I figured I'd better try using the tripod and zooming in to nab the real thing before clouds rolled in.  It was 7:13PM when I took this moon shot. 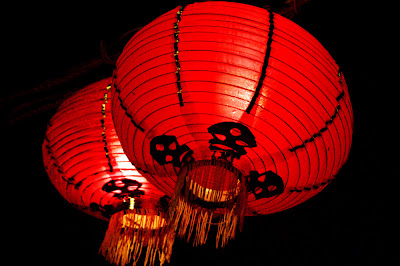 Nothing was going on yet so, at 7:27 I figured I'd snap a close-up of a lantern hanging overhead. 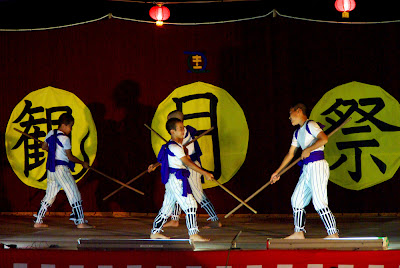 By 7:30 the action started picking up. Elementary School students demonstrated some of their Martial Arts skills. 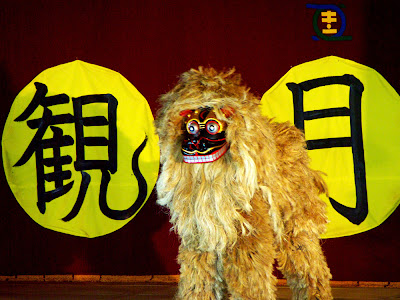 Around 8PM the human-powered Shishimai (Lion Dog) gets on the stage and bounces around to some loud music. Everyone loves him. There's actually three Dudes inside there and I've never figured out how they survive the Summer heat while making this critter jump, roll, stand up on its hind legs and get the wooden jaws snapping to scare the Begees outa little kids. 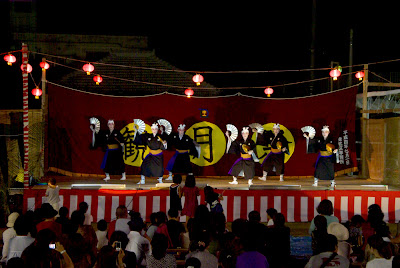 The night goes on with all sorts of classical dances being performed on stage and there's some Hip-hop modern stuff, too. I just don't waste my talents shooting that stuff and go grab an iced coffee instead. 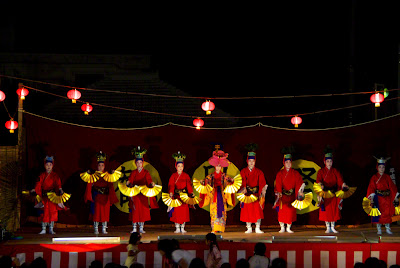 By 9PM the creme of the crop classical dancers come out and perform. Believe it or not, I've been shooting this group for years and years and still have no clue what the name of the dance is.
Guess, sometime when I'm not busy doing camera stuff I'll hafta go and ask them! 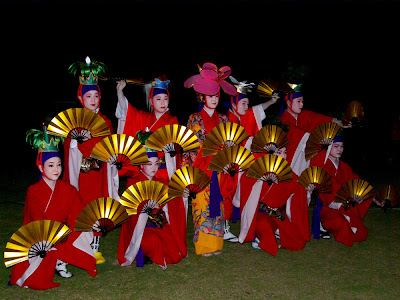 When they finished their last dance I sneaked this shot as they posed for the newspaper. I know, if they spotted me snapping their picture giggles and peace signs would erupt all over the scene.

By 10:30 I had packed up and walked back to my office. That happens to be a Karaoke Bar, for those who don't know me very well.

Weekdays are always slow. Nobody goes out drinking and singing during the week. So, I downloaded my RAW shots. There were 275 of them. Then, I started developing. Big Mistake!

Around 11PM, I had maybe 10 shots developed. Here they came. First there was three. Then, half a dozen showed up. The Dudes from inside the Lion Dog, the Dancers, their Sensei and half the City Councilmen wanted to drink and sing. And I had to join them ! Here are the same folks you saw in previous photos
They got outa their fancy kimonos
Ordered sake and beer and partied
This photo was taken at 1:30AM 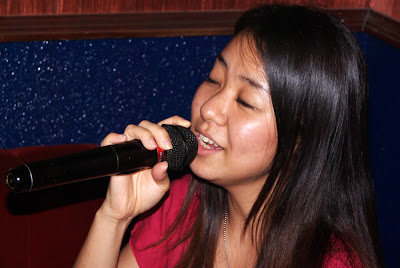 They sang songs. They consumed massive quantities of alcohol. They ordered me a beer everytime the saw my cup running low. And the night went on and on, endlessly.  2:54AM 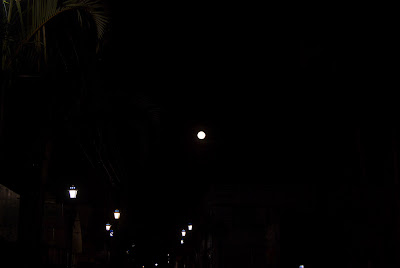 At 5:08AM I went out to buy an iced coffee from a vending machine. The Full Moon was up on the other end of town. So, I shot it at a wide-angle. 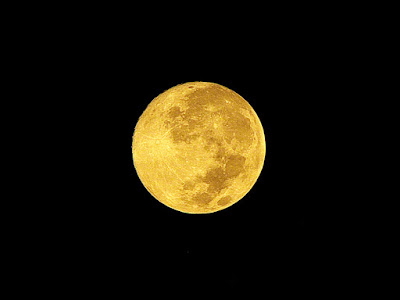 What's a Full Moon Festival like in your part of the World?

Posted by RyukyuMike at 3:45 AM

Wish I'd a been there.

Keith,
Woulda been nice. You coulda gave me a ride home!