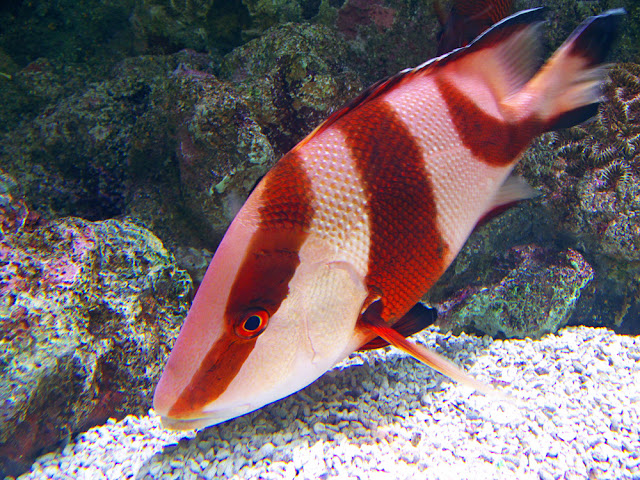 Shooting pictures of fish in an aquarium can be tricky and I’ve seen tourists from all over the world firing away with their cellular phones, point and shoot and DSLR cameras; ending the day buying postcards instead of going home with the pictures they wish they’d have been able to take themselves.


The worst mistake you can make is using your flash. In most cases, it will bounce back off the glass and do very little as far as improving the lighting on your subject. Here’s a little trick I used to get this shot. Look in your camera manual and see if it’s possible to turn-off the Laser that sends out a beam when you AUTO FOCUS. If you can turn it off, you won’t have to use Manual Focus and the fish won’t know you are focusing.

I used AUTO FOCUS in this shot because I was in a hurry and was expecting excited children coming around the corner of the aquarium to smudge the glass and scare the fish away in about 3 seconds. I removed my lens hood, pressed the lens flat against the glass, set my 2 second timer, let the camera auto focus and snapped the shot.

This photo was made with a Panasonic DMC-FZ50 handheld f/3.2 1/4sec ISO 100 Lens@7mm, an impossible shot without a tripod, had I not steadied the camera by pressing it against the glass.

Practice aquarium shots at home or at a friend’s house, so the next time you visit a world class aquarium you come home with more than just postcards.

Another quick photography tip-do it while the munchkins are sleeping !  More later.....

Posted by RyukyuMike at 3:07 AM

I never knew what to do with auto focus, now I know. Thanks for this tip.

Lilypond,
Thanks. I wouldn't have used auto focus if I'd had time. There's many other things you can use auto focous on other than fish in an aquarium !