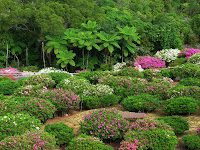 Luckily I packed almost all my camera gear in a bag for this trip. Thinking I'd get some nice close-ups of the Azaleas it was kind of disappointing the way the weather turned out. The wind in the mountains and harsh sunlight kind of wilted all the flowers.

When you go out on a shoot like this, you better be flexible. Mother Nature takes a turn for the worst, you just have to outsmart her. For this shot I got up high in a tower and looked down into a valley where the wind wouldn't have much effect on me or the scene. I set my tripod in a position where a concrete barrier protected it from the breeze. The Giant Ferns in the upper-center of the frame weren't moving, so I knew the valley was also, sheltered from the wind. I stopped-down a few clicks on aperature and used the camera's 2 second timer, held my breath and fired-away.

To this day, I couldn't tell you what an Azalea looks like; even if I tripped-over a flock of them ! What I really wanted was the picture of the Giant Ferns ! About a month ago, I shot this curly wachamakallit, golden plant sprouting at the base of another mountain. I was on a Cherry Blossom assignment that day and it was another windy day on the top of a mountain with me trying to get nice, slow shutter speed shots of (ugh) flowers moving in the wind ! The gal writing the story I was shooting for spotted the plant on our way down the hill and started shooting it with her point and shoot (toy) camera. I noticed the way the sun was hitting it, just right and knew if I took the time to set-up my tripod, it'd be too late; the sun would move. So, I just laid down behind a log and rested my lens on a log and captured it !

One of the things I really like about the web; if you post something (you have no clue as to what it is) on a website and be honest about it, somebody out there will tell you. A few days after I posted it, it was identified ! It's a baby Giant Fern and IT's EDIBLE ! To me, that's what Flower Photography should be all about !

Now, all I have to do is find out the scientific name of these Giant Ferns and I might get a Nature Magazine to buy them. I can Google that easy. Meanwhile, anybody out there who can tell me how you cook them ?

Love your posts and writing style. You don't talk down to the readers and you talk to us as if your talking to a friend. Keep the photography coming, can't get enough of it!

So beautiful! My moms photographs ferns in Hawaii and I have a fascination with them now....lindamerz.com.

Just for your information, I think you'd make a fantastic travel writer. Your words are perfect with your photography :)

I've only eaten Fiddleheads (baby ferns) raw, but I've read that you can sautee them. Here's a recipe I just found: http://www.culinarycafe.com/Vegetables/Sauted_Fiddlehead.html