Some Pictures Have to be Vertical 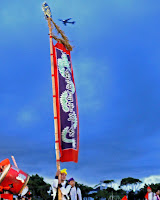 Even though myself and my cameras hate to shoot vertical shots, sometimes it's the only way to go. Unless you feel like shooting horizontal with a wide angle and 20 something MegaPixel camera, then cropping it vertical after the fact. That's what I ought to do; buy a bigger camera !

This shot isn't something a glossy magazine would want to print, but it'd be great for a newspaper. When I shot it the sun was going down. I saw the plane coming and knew I had to get my camera off the tripod, if I wanted to get low enough to the ground to compose the shot the way I did; airplane, people and flagpole all in the frame.

A newspaper isn't as concerned about a picture being noisy, as long as it's newsworthy. Magazines want sharp, clear and detailed images for their glossy pages. In newsprint even a sharp picture looks noisy because of the quality of paper it's printed on. The way to get a picture like this sharp, clear and noiseless would be to have your camera mounted on a tripod, ISO set at the lowest tolerable setting for the shutter speed you desire, and have a cable release attached to the camera to eliminate shake when you snap the picture.

I'm always yelling at my shooting buddy when we go on our weekly shooting excursions about using the tripod. You just can't beat it for getting great shots. Even if you don't have a cable release, you can use the timer on your camera to eliminate the shake you get from pressing the shutter button. Just don't try a timer when the subject is moving !

Now, when I'm out in the woods or on the beach trying to catch critters on the move I rarely carry a tripod. If it's light enough to get a 1/1000 second shutter speed, I can probably hold steady enough for a good clear shot while panning the camera. If the subject isn't moving and the light isn't that great, I try to find something to steady the camera on ( a rock, limb of a tree, anything sturdy ); even sit down and use my knees and elbows to form a human tripod ! You're just not going to get the greatest photos in the world without a tripod, so always use one unless there's absolutely no other way to take the picture.

This morning I went without a tripod. Why ? Three dogs and three Grandsons went on a three mile hike with me. I had to travel light and be able to move quickly. Didn't take any wildlife shots, but got some great shots using expedient methods. Where are they ? Going to a Glossy Magazine ! More later
Posted by RyukyuMike at 11:24 PM