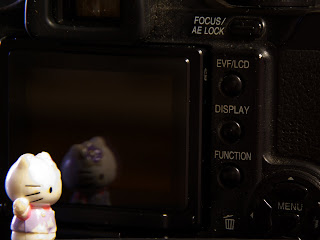 When you don't take your camera out for 3 continuous days because it won't stop raining, cabin fever sets in pretty fast. Now my new camera can go out in the rain and won't be harmed by it; I'm the one who doesn't like getting wet !

Actually, I'm like a caged animal when it rains all day long. And I hate taking pictures indoors; that's for those studio photographers, not me. This photo was shot back in August of last year when I was really, really bored, I guess. I'm going through my old folders and throwing everything away to make more room for important stuff and I figured why not post one; might give some aspiring studio photographer some ideas. Then I'll throw the other 99 shots I took of Hello Kitty that day away.

There were two real important things I learned from this shoot, though. One was that I'll never become a Still Life Photographer and the other was I never realized how filthy my poor cameras got from me crawling around on the beach and in the woods until I shot a 10MegaPixel picture of one an blew it up full size on a PC. There was rocks and boulders, maybe even asteroids all over the outside of the camera except for on the lens. Everybody knows about keeping lenses clean, I think ?

So, it's important to clean the outside of your camera, too. Unless you do what I plan on doing tomorrow; take the camera out for a walk in the rain !
Posted by RyukyuMike at 2:10 AM