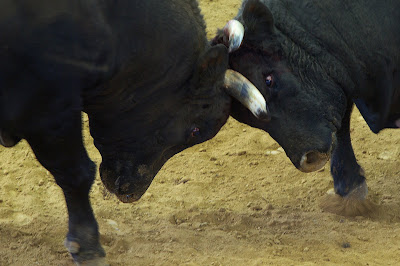 Going back through my past blogs looking for some unique aspect of culture in this part of the world to publish on my newly created Insider's Tips Page, I found this gem. Well, it deserves an update so, here I am almost two years later dusting it off and doing some editing.

A Bullfight in Okinawa is not the bloody sport most people would imagine when they hear the word "Bullfight". Bull Wrestling would be a better description and it is similar, in many ways, to Japanese Sumo Wrestling.

There are no Matadors or swords and knives used in this sport. Some handlers are present in the ring to cheer their side of beef on and lead them in the right direction.

The bulls lock horns and have a shoving match which may last from two to twenty minutes. When one of them gets tired and runs off, the other one is declared the winner.

Every once in awhile, one of the bulls will look at the size of his opponent and decide to turn into a chicken and just run away without ever bumping heads. Then he'll run around the ring trying to find the exit. And the crowd goes wild.

So, after a few thousand clicks of the shutter on my camera, I've decided it's more fun watching the people at the Bullfights than it is watching the bulls. And the best part of the whole sport is waiting for a bull to come into the ring and run around acting like a chicken. The rest of this post in Quotation Marks is my original from March 4, 2009 back when I was too busy to form an opinion about Okinawa Bullfighting:

"Its been a pretty hectic month of shooting the bull and I thought it was all over in Febraury. Well, the bullshooting is really done, now it's a matter of getting all the, what's called post-processing done. So, it looks like these big fellas are going to be haunting me through the month of March, too.
Too tired tonight to post much of a Blog, but, if you want more of the Bull Story go to my website and click-on articles at the top of the page. Then click Okinawan Bullfight and you'll see my first attempt at putting an article on a webpage. THAT'S ALL FOLKS."

If you ever get the opportunity to see an Okinawan Bullfight, don't pass it up !

Posted by RyukyuMike at 6:20 AM

Fantastic article! I find the bull fights fascinating in a way...wish I could see them in person!

Great shot of the bullfights.

Sounds a lot more fun than the bullring in Spain, Great information and Photos, Thanks,Mike

Gene,
Yes, it was kinda interesting and no bloodshed. Even after shooting bulls all day, I still went and grabbed a few burgers on the way home!